LeBron James had 21 points, 11 assists and eight rebounds, and Anthony Davis added 17 points against his former team in the Los Angeles Lakers’ fifth consecutive victory, 112-95 over the New Orleans Pelicans on Friday night.

Kentavious Caldwell-Pope hit four 3-pointers while scoring 16 points, and Montrezl Harrell also had 16 for the defending NBA champions. The Lakers remained unbeaten in five meetings with the Pelicans since the franchise-altering trade in July 2019 that sent Davis to LA and three starters to New Orleans.

Brandon Ingram scored 17 of his 20 points in the first half against his former team for the Pelicans, who have lost five straight. Zion Williamson had 21 points and 12 rebounds after missing Wednesday’s game against the Clippers due to the NBA’s health and safety protocols, but New Orleans blew an early 15-point lead on its third stop on a seven-game trip. 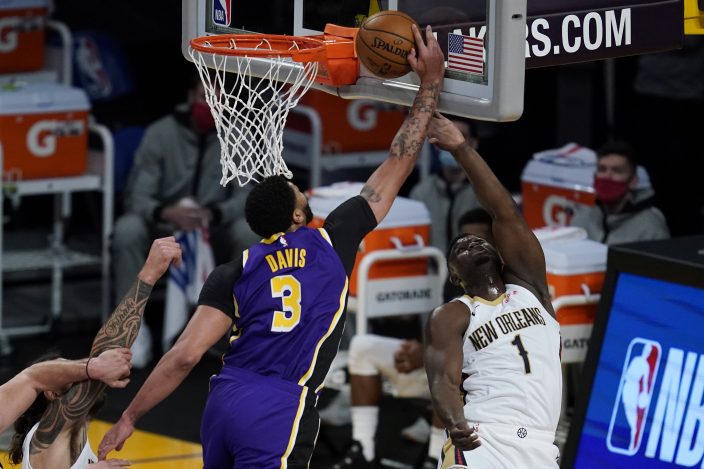 Dennis Schroder had 12 points for the Lakers, and Kyle Kuzma added 11 points and 13 rebounds. 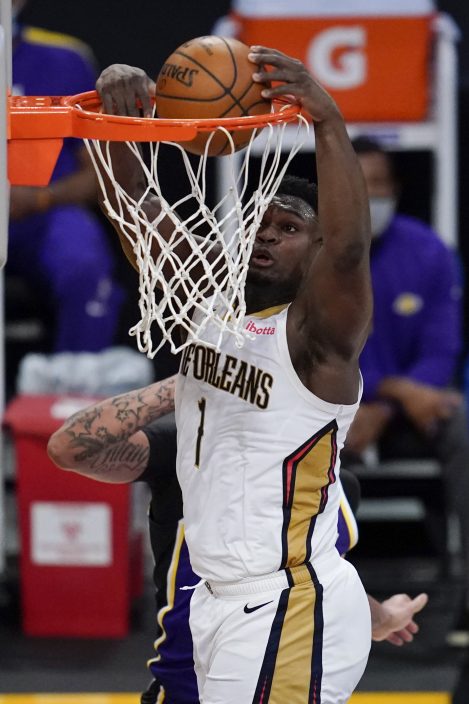 The Bucks improved to 9-4, winning their fourth straight and snapping the Mavericks’ winning streak at four.

Both teams wasted plenty of opportunities from the foul line. The Bucks were 12 of 25 on free throws, with Antetokounmpo going 1 of 10. Dallas was 6 of 13.

Middleton scored 25 points for the Bucks.

Boston returned after having three games postponed due to players testing positive for the coronavirus and others being ruled out because contact tracing showed that they could have been exposed to it.

Aaron Gordon had 17 points for Orlando. The Magic have lost four straight.

Oklahoma City rallied from 22 points down in the second half. Zach LaVine, who led the Bulls with 35 points, could have won it in overtime but he missed a deep, off-balance 3-pointer in the closing seconds.

Lu Dort scored 21 points for the Thunder. They won for the first time at home this season.

The Clippers have won 15 consecutive road games against the Kings. Los Angeles hasn’t lost in Sacramento since March 19, 2013.

Playing without guards Patrick Beverley (personal reasons) and Lou Williams (sore left hip), the Clippers led by eight at halftime and broke the game open in the third quarter when they outscored the Kings 37-16.

Marvin Bagley III had 20 points and five rebounds for Sacramento.

Drummond had the Cavaliers’ first 30-20 game since Carlos Boozer had 32 points and 20 rebounds against Seattle on Jan. 20, 2004. He also had three assists, two blocks and two steals to help Cleveland snap a three-game losing streak.

Julius Randle had 28 points and six assists, rookie Immanuel Quigley scored a season-high 23 points and R.J. Barrett had 20 points for New York. The Knicks have lost five in a row.

Donovan Mitchell made six 3-pointers on his way to 26 points and Utah used a 21-0 second-half run to power past Atlanta.

Bojan Bogdanovic scored 17 points, Rudy Gobert had 15 points and 13 rebounds, and Jordan Clarkson scored all 16 of his points in the second half to boost the Jazz to their fourth straight victory.

Cam Reddish scored 20 points for Atlanta, and Clint Capela had 16 points and 11 rebounds. Trae Young was held to four points on 1-for-11 shooting with seven assists as the Hawks dropped their fifth game in the last six.

Whoa, Nelly! Korda makes it 2 straight wins for her fam ...