Michael White's long-anticipated trip to Iran was already a disappointment. The love interest he'd gone to visit had stopped seeing him and he'd idled away hours in his hotel room by himself.

Then it got much worse.

On his final day, the car he and his tour guide were in was abruptly cut off by another vehicle with a passenger frantically waving his hands at them. He recalls three men getting out, one with a video camera, forcing him into their car and driving him to an office for questioning. From there, it was on to jail, where orange-tinted water spewed from the sink and shower and prison-issued dirty sandals proved useful in shoving sewer roaches in the bathroom into the toilet. 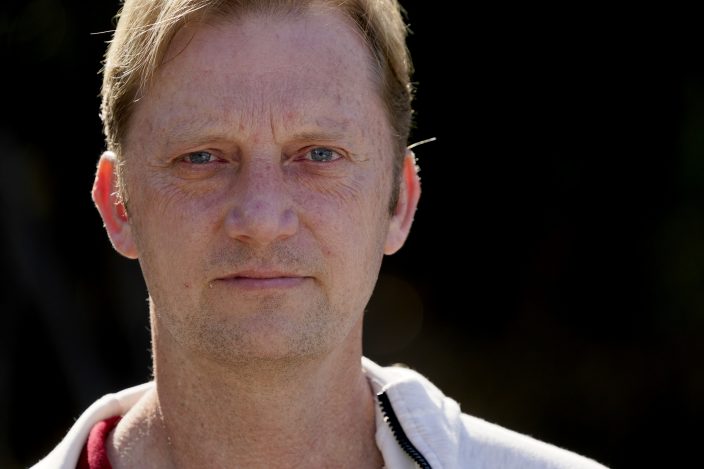 Michael White stands for a portrait Wednesday, Jan. 13, 2021, in San Diego. The Navy veteran kept a handwritten document detailing the nearly two years he spent imprisoned in Iran. The Associated Press obtained a copy of the manuscript. In it, he catalogues physical abuse from his jailers and taunts from fellow inmates while held on dubious allegations. (AP PhotoGregory Bull)

A handwritten journal he wrote behind bars — a copy of which was provided exclusively to The Associated Press — offers new details about his ordeal in Iran, which ended last June when the State Department secured the Navy veteran's release. In it, he catalogues physical abuse from his jailers and taunts from fellow inmates while held on dubious allegations. He writes tenderly of the woman he visited even while likening himself to a mouse lured into a trap. And he brands himself a “political hostage,” held on pretextual charges to secure concessions from the U.S.

Seven months after his release, White is trying to reassemble his life in Mexico, unsure what comes next but eager to share his story.

“I don’t want the government of Iran to think that, 'Oh, Mike White's out of here, he's going away, he's going to be quiet,'" he said in a recent interview. “That's not going to happen. Believe me, if only you understood the fear and anger inside of me as a result of what they did.”

The peculiar saga began in July 2018 when White flew to Iran to visit a woman he'd met years earlier in a Yahoo chat room and with whom he hoped to rekindle an on-off relationship that included two prior visits to the country. But the bond turned sour on the most recent trip when the woman stopped seeing him and encouraged him to return home earlier than he'd planned.

His 156-page manuscript is told from his own perspective with details that are vivid though sometimes difficult to corroborate. Iran's mission to the United Nations did not respond to a request for comment. But according to the document, the men who arrested him pulled him into their car and drove him, blindfolded and handcuffed, to a building for questioning. His interrogator asked about his relationship with the woman, seeming to know details of her family, and telling White, vaguely, that some in Iran were concerned about his intentions there.

He was taken to what he calls the “intel jail,” where he says he was given no food for days, nor blanket or pillow even as the vent blew frigid air. The conditions were compounded, he says, by his cancer diagnosis that had resulted in chemotherapy treatment and hospital stays in the months before he left for Iran.

He was repeatedly interrogated over several months about why he'd come to Iran, as officials suspicious that he may be a spy handed him questionnaires focused on his military background and any intelligence service connections. At one point, he writes, he fabricated a tale about being tasked to gather intelligence by an acquaintance he said was with the National Security Agency, figuring that interrogators wanted to hear something like that before setting him free.

“I was just saying something out of desperation, doing whatever to hopefully get them to just cut me loose," he said in the interview. ”It turned out it wasn’t really helpful at all."

The truth was more mundane, he says, albeit more difficult to comprehend: He was a “dumb American” pursuing love.

White's decisions were undoubtedly risky: His Iran visits came despite that country's hostile relationship with the U.S. He says he and his girlfriend got together in 2014 in Iran's Kish Island, even though retired FBI agent Robert Levinson vanished from there years earlier.

But White, 48, who grew up in Southern California and was honorably discharged from the Navy, says he's long been drawn to Iran's culture and people and had felt safe there, connecting through social media to a network of acquaintances. He'd once thought of law school or entering politics, but at the time of a 2018 trip he hoped would recharge his life, he was working as a Job Corps resident adviser.

He struggles to reconcile his affection for the woman he perceived as his girlfriend — “Her voice melts me with its softness and tenderness. My heart flutters when I see her,” he writes — with the suspicion that he was somehow set up during his visit. His Instagram page reflects that ambivalence, with photos posted this year of them together.

“Yet, sadly, I was lured into a trap, like a mouse trap. I was the mouse,” he writes. "I followed my heart instead of my head and missed signs.”

In jail, he writes, he was once awakened by a guard dumping a bucket of cold water on him. Another time, an interrogator snapped a whip on his toes as he completed a questionnaire. After White tossed water on a surveillance camera to get the guards’ attention, they pummeled him in the ribs and threw him to the floor, he writes.

He was relocated to another prison where some inmates tauntingly referred to him as “The Great Satan.” One placed a cockroach inside his pants pocket as a prank.

At the suggestion of a prisoner he befriended, he began a handwritten manuscript, writing it under the cover of playing Sudoku to hide it from the guards. He gave the pages to the prisoner who he says was able to smuggle it out through a cousin.

White ultimately faced various charges, including posting private images, collaborating with the U.S. against Iran and disrespecting Iran's supreme leader. He was sentenced to 10 years but calls the charges a pretext to “extort” concessions.

He insists he's not a spy and never posted any inappropriate photos of his girlfriend. He writes in his manuscript that he has indeed made social media posts about Iran but denies having disparaged Ayatollah Ali Khamenei.

An unexpected development came last spring as the coronavirus ravaged Iran. White, who was himself infected, was among thousands of prisoners released on medical furlough, permitted to live freely in Tehran in the Swiss Embassy's custody while required to remain in Iran.

The State Department, which has maintained that White was wrongfully detained, arranged for his release in June, flying him back to the U.S. as part of a deal that spared additional prison time for an American-Iranian doctor convicted in the U.S. of sanctions violations.

In August, he visited the White House with other freed hostages and detainees to record a Republican National Convention segment praising the Trump administration. He sat beside President Donald Trump in a three-piece suit in an experience he says made him feel like a celebrity, though he recalls Trump not shaking his hand.

“He was like, well, you know, if the media sees that, they're going to be flipping out of because of the corona(virus) thing,” White said.

White isn't sure what comes next. He had contemplated opening a Persian restaurant, but isn't sure he'll do that now. He likens his life to the aftermath of a city-flattening hurricane.

"I’m just picking up the pieces, regrouping and trying to figure out how I’m going to move forward and stuff."