Between the still-raging pandemic and suddenly very real threat of violence, the inauguration of Joe Biden and Kamala Harris next Wednesday promises to be one of the most unusual in American history.

Here's what we know: 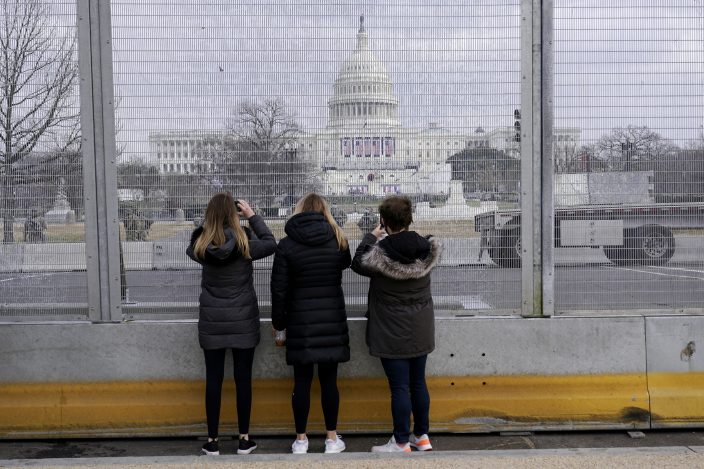 D.C. Mayor Muriel Bowser is flat-out telling people to stay home. Airbnb says it is cancelling all reservations to prevent people from coming to the capital. Local activists are calling for Bowser to close down all hotels, but she has declined to go that far. Downtown roads and metro stations will be closed and authorities are so determined to keep people away that they're considered closing all the bridges from Virginia. 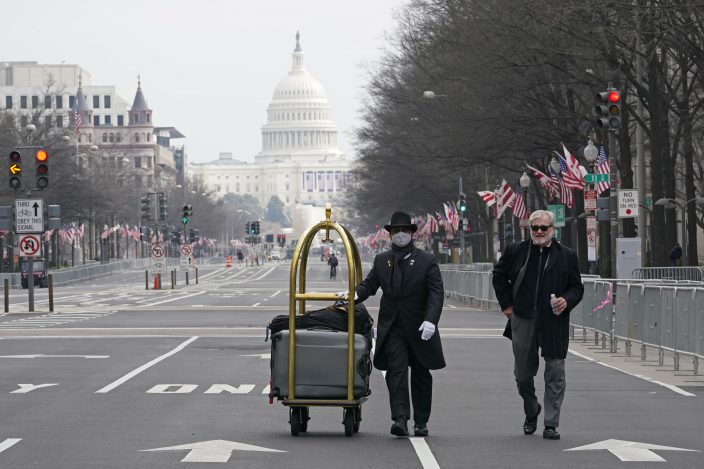 Danish Rozario, left, of Silver Spring, Md., wheels the baggage down Pennsylvania Avenue for a guest at the Trump Hotel in Washington, Friday, Jan. 15, 2021, ahead of the inauguration of President-elect Joe Biden and Vice President-elect Kamala Harris.Between the still-raging pandemic and suddenly very real threat of violence from supporters of outgoing President Donald Trump, Jan. 20 promises to be one of the most unusual presidential inaugurations in American history. Joe Biden and Kamala Harris will take the oath of office outside the Capitol. (AP PhotoSusan Walsh)

WHAT'S GOING TO BE DIFFERENT?

The outgoing president traditionally attends the inauguration to symbolize the peaceful transfer of power. But Donald Trump, who falsely claimed that the election was riddled with fraud, has refused to be there. Vice President Mike Pence plans to attend.

Forget a parade with crowds of people cheering on the new president and vice president. And there will be no inaugural balls for Biden, Harris and their spouses to dance the night away.

Planners had originally sought to retain some time-honored aspects of a normal inauguration, just less crowded and within the boundaries of COVID-19 protocols. But in the wake of the violent Jan. 6 mob attack on the Capitol by Trump supporters, all semblance of normality might be gone.

Downtown Washington D.C. has been turned into an armed camp. The National Mall is sealed to the public and the Washington Monument has shut down. 21,000 National Guard troops will be on the job on Jan. 20, alongside D.C. police and multiple federal law enforcement agencies.

WHAT'S GOING TO BE THE SAME?

Like their predecessors, Biden and Harris will take their oaths of office outside the Capitol Building. Jennifer Lopez will perform and Lady Gaga will sing the national anthem. Biden, according to the inauguration website, will give a speech to the nation, “laying out his vision to defeat the pandemic, build back better, and unify and heal the nation.”

Afterwards, Biden and Harris will complete the traditional “Pass in Review” inspection of troops from all service branches, a ritual that symbolizes the peaceful transfer of power to a new Commander in Chief.

Biden, first lady Jill Biden, Harris and second gentlemen Douglas Emhoff will later visit Arlington National Cemetery to lay a wreath at the Tomb of the Unknown Soldier. They will be joined by former presidents and first ladies Barack and Michelle Obama, George W. and Laura Bush, and Bill and Hillary Clinton.

SO WHAT EVENTS ARE THERE?

Planners have laid out several days of shows, presentations and virtual events, including:

(asterisk)Sun. Jan 17 at 8 p.m.: “We the People” — a virtual concert hosted by Keegan-Michael Key and Debra Messing.

(asterisk)Mon. Jan 18: A national day of service and volunteerism to coincide the Martin Luther King Jr. Day. At 8 p.m., an MLK-themed special will be broadcast.

(asterisk)Tue. Jan 19 at 5: 30 p.m.: A memorial ceremony to pay tribute to those killed by COVID-19. The ceremony will include illuminating buildings, ringing church bells around the nation and a lighting ceremony at the Lincoln Memorial's reflecting pool.

(asterisk)Wed. Jan 20 at 8:30 p.m.: Tom Hanks will host a 90-minute prime time special with remarks from Biden and Harris and performances by Justin Timberlake, Jon Bon Jovi and Demi Lovato.

WILL THERE BE VIOLENCE?

The inauguration comes just two weeks after the insurrection at the Capitol by Trump supporters as Congress was confirming Biden's victory.

Law enforcement officials insist they won’t be caught flat-footed this time and the FBI has warned of armed protests and potential attacks being planned by militant Trump supporters in D.C. and in every state capital.

Tensions will be high through Jan. 20 and beyond. Officials warned on Friday that the increased fortification of the Capitol and White House could drive potential insurgents to seek out softer targets in D.C. or elsewhere around the country.