German Chancellor Angela Merkel's party is choosing a new leader on Saturday, eight months before voters decide who will succeed Merkel in a national election.

The new leader of the center-right Christian Democratic Union will either run for chancellor in the Sept. 26 parliamentary election or have a big say in who does run.

There is no clear favorite in Saturday's vote at an online convention of the CDU, with three main candidates who offer significant differences at least in style. 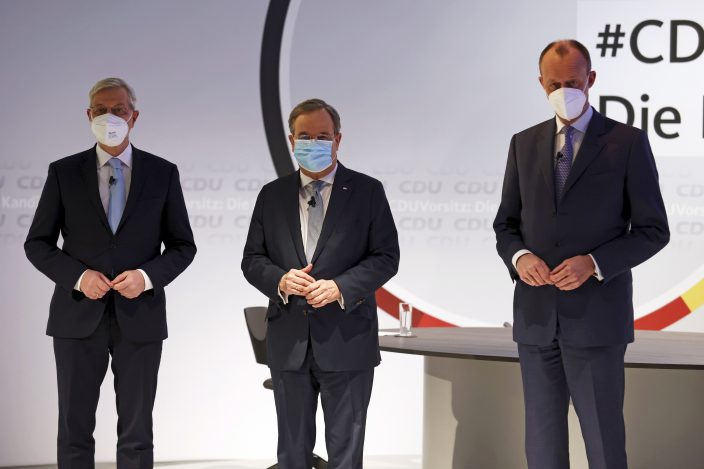 The three candidates for the chairmanship of Germany's Christian Democratic Union (CDU) party from left, Norbert Roettgen, Armin Laschet and Friedrich Merz pose for a photo before a discussion at the party's headquarters in Berlin, Friday, Jan. 8, 2021. Background slogan reads: CDU chairmanship: the candidate round. (Christian MangPool photo via AP)

Friedrich Merz, 65, is a one-time rival of Merz who stands for a more conservative course. He is making his second attempt to win the party leadership after a decade away from front-line politics, following his narrow loss in 2018 to outgoing leader Annegret Kramp-Karrenbauer.

Armin Laschet, 59, is the governor of Germany's most populous state, North Rhine-Westphalia — a traditional center-left stronghold where he won election in 2017. He is viewed as more in line with Merkel's pragmatic centrism.

Norbert Roettgen, 55, heads parliament's foreign affairs committee. He has served as Germany's environment minister — a post from which Merkel fired him after he lost North Rhine-Westphalia's 2012 election. He defines himself as a candidate of the “modern center," emphasizing issues such as fighting climate change.

The race is widely expected to go to a runoff between the two top-placed candidates. Saturday's winner will then be officially endorsed in a postal ballot — which is expected to be a formality but is required by German law.

Saturday's decision will end an 11-month leadership limbo in the CDU after Kramp-Karrenbauer, who had failed to impose her authority on the party, announced her resignation. A vote on her successor was delayed twice because of the coronavirus pandemic.

It won't be the final word on who runs to succeed Merkel as chancellor. The CDU is part of the Union bloc along with the Bavaria-only Christian Social Union, and the two parties will decide together on the center-right candidate. The Union currently has a healthy poll lead, helped by positive reviews of Merkel's handling of the pandemic.

CSU leader Markus Soeder, the governor of Bavaria, is widely considered a potential candidate after gaining in political stature during the pandemic. Some also consider Health Minister Jens Spahn a possible contender.

Merkel, who has been chancellor since 2005, announced in late 2018 that she wouldn't seek a fifth term. She also stepped down from the CDU leadership.

Germany: Merkel's party will have to wait for new leader