Here’s what’s happening Saturday with the coronavirus pandemic in the U.S.:

— Several governors expressed exasperation at the Trump administration after being assured that the federal government had enough vaccine stockpiled to speed up or expand state rollouts only to be later told those reserves don't exist. Among them are Wisconsin's Democratic governor, Tony Evers, who has been taking heat from the state's Republican-led Legislature over the slow pace of vaccinations. Several other governors, including Oregon Gov. Kate Brown, were left scrambling to alter plans to expand the rollouts in their states, including to senior citizens.

This photo provided by the LA County Dept. of Medical Examiner-Coroner shows Elizabeth "Liz" Napoles, right, works alongside with National Guardsmen who are helping to process the COVID-19 deaths to be placed into temporary storage at LA County Medical Examiner-Coroner Office on Tuesday, Jan. 12, 2020 in Los Angeles. More than 500 people are dying each day in California because of the coronavirus. The death toll has prompted state officials to send more refrigerated trailers to local governments to act as makeshift morgues. State officials said Friday they have helped distribute 98 refrigerated trailers to help county coroners store dead bodies. (LA County Dept. of Medical Examiner-Coroner via AP)

— Organizers of the Boston Marathon aren’t letting the indefinite postponement of the race keep them from trying to keep runners — always a close-knit group — from staying connected. The Boston Athletic Association launched a virtual Athletes’ Village in the hopes that would-be racers will use it as a digital hub to share training tips, seek out coaching and compete against each other in monthly challenges. Other World Major marathons are also connecting their runners virtually. The New York Road Runners, which administers the TCS New York City Marathon, is offering online strength and exercise classes to try to foster a sense of camaraderie among athletes who would normally do those activities in a group setting.

— The pandemic has led some New Yorkers to seek out more space in the suburbs and beyond, and has made it harder to find affordable housing in places such as Stamford, Connecticut. For the first time in three years, more people moved to Connecticut in 2020 than left it. Thomas Madden, director of economic development for Stamford, said that in a typical month before the pandemic, there were roughly $80 million to $110 million in housing sales. That shot up to $146 million in August, $152 million in September and $157 million in November. And late last month, all those buyers, including many willing to pay in cash, left the New York City suburb with just five single-family houses for sale at less than $400,000.

THE NUMBERS: Data from Johns Hopkins University shows that the seven-day rolling average of new U.S. cases climbed from under 196,000 on Jan. 1 to nearly 229,000 on Friday. The seven-day rolling average of new deaths, meanwhile, climbed from 2,500 on Jan. 1 to 3,263 on Friday. That pushed the country's COVID-19 death toll to 392,537, virtually assuring that it will reach 400,000 by the time President-elect Joe Biden is inaugurated on Wednesday. QUOTABLE: “I was told by the vice president, a couple days ago, and the secretary of health services that they’re opening the gates, we’re going to send you the remainder of what was stockpiled. I guess they may have been telling the truth because it’s zero.” — Wisconsin Gov. Tony Evers.

ICYMI: With all that is going on, it would be easy to forget that at the height of the pandemic, there are people looking for ways to help others get through it. One of them is Charvi Goyal, a 17-year-old high school junior from Plano, Texas, who realized the schoolmates she had been informally tutoring between classes would still need help after schools moved online. She and three classmates created TutorScope, which offers free peer-to-peer online tutoring. Now with 22 tutors from Texas, Arizona and Ohio, the nonprofit has helped more than 300 students from as far away as South Korea. 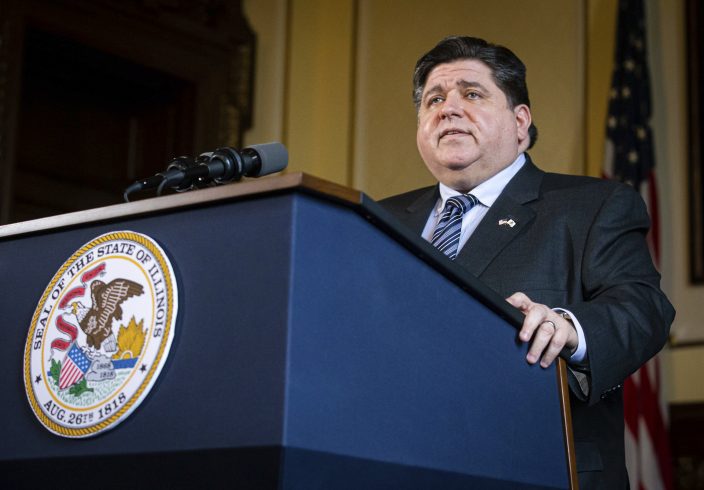 FILE - In this Jan. 11, 2021 file photo, Illinois Governor JB Pritzker gives an update on the COVID-19 pandemic in Illinois during a press conference at the Illinois State Capitol, in Springfield, Ill. On Friday, Jan. 15, 2021, Pritzker said the spread of COVID-19 has slowed sufficiently that he's easing restrictions in three Illinois regions, although strict rules will remain in place in Chicago and other parts of the state. (Justin L. FowlerThe State Journal-Register via AP File)

VIRUS TODAY: Unemployment applications in U.S. up this week