ISLAMABAD — Pakistan’s planning minister says the country’s drug regulatory authority has approved the use of Oxford-AstraZeneca’s COVID-19 vaccine and the government is trying to make it available by the first quarter of the year.

Asad Umar, who is also the head of the national agency for COVID-19, told Geo TV that the vaccine in the first phase will be administered to health workers and those aged 65 and above.

Umar said the Chinese company CanSino is also holding clinical trials in Pakistan and hoped its vaccine would also be registered next month. 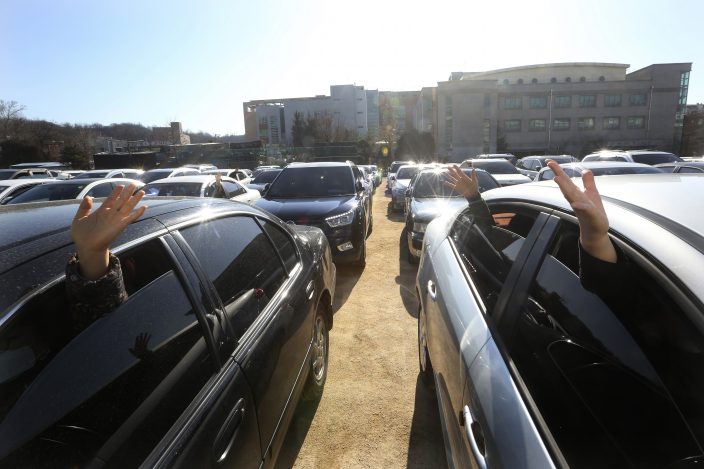 Christians inside their cars pray during a drive-in worship service amid measures to prevent the spread of the coronavirus at Songgok high school in Seoul, South Korea, Sunday, Jan. 17, 2021. (AP PhotoAhn Young-joon)

He said Pakistan will get the vaccines through the Global Alliance for Vaccines and Immunization, or GAVI, and other alternative international sources. The AstraZeneca vaccine is being prepared in India, which has strained relations with rival Pakistan and says it will prioritize its own population. 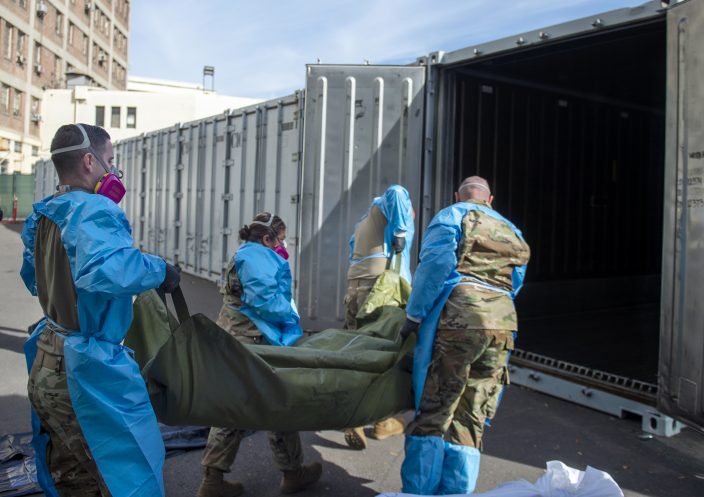 FILE - This Jan. 12, 2021, file photo provided by the LA County Dept. of Medical Examiner-Coroner shows National Guard members assisting with processing COVID-19 deaths and placing them into temporary storage at LA County Medical Examiner-Coroner Office in Los Angeles in Los Angeles. More than 500 people are dying each day in California because of the coronavirus. The death toll has prompted state officials to send more refrigerated trailers to local governments to act as makeshift morgues. State officials said Friday they have helped distribute 98 refrigerated trailers to help county coroners store dead bodies. California reported 669 COVID-19 deaths, the second-highest daily death count, on Saturday, Jan. 16, and the nation's most populous county announced it had detected its first case of a more transmissible strain of the coronavirus. Public health authorities in Los Angeles County confirmed its first case of the variant of COVID-19 first detected in the United Kingdom. It was identified in a man who recently spent time in the county. (LA County Dept. of Medical Examiner-Coroner via AP, File)

— China has finished building a 1,500-room hospital for COVID-19 patients to fight a surge in infections the government said are harder to contain and that it blamed on infected people or goods from abroad. 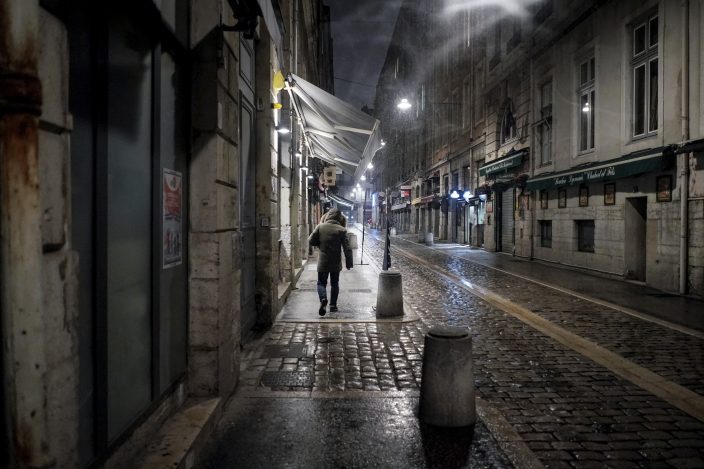 A man walks in the street at the start of the new curfew to counter the COVID-19 in the center of Lyon, central France, Saturday, Jan. 16, 2021. All of France will be under a stricter curfew starting Saturday at 6 p.m. for at least 15 days to fight the spread of the coronavirus. (AP PhotoLaurent Cipriani)

— Brazil hasn’t approved a single vaccine yet, and independent health experts who participated in its immunization program say the plan is still incomplete, at best.

— A new U.N. report estimates that the COVID-19 pandemic reduced the number of international migrants by 2 million by the middle of 2020 because of border closings and a halt to travel worldwide. 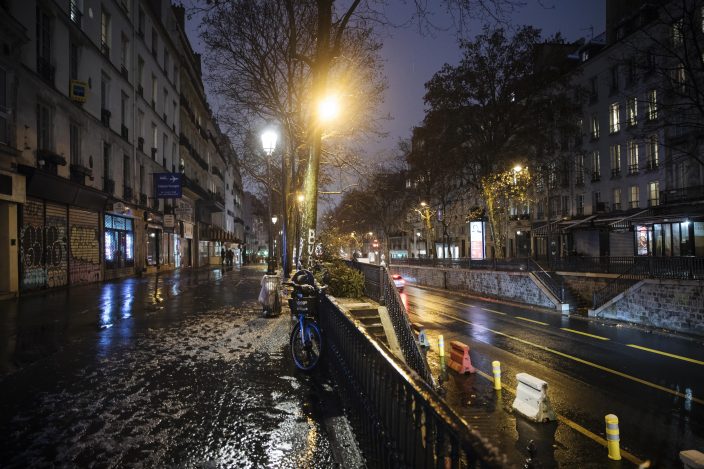 An empty street as the 6 p.m curfew starts in Paris, Saturday Jan.16, 2021. The prime minister announced Thursday an extension of the 6 p.m.-to-6 a.m. curfew to cover the whole country, including zones, like Paris, where it previously hadn't started until 8 p.m. Shopping and all outdoor leisure activities stop at curfew, only short pet walks allowed. Working and commuting allowed with note from employer. Food deliveries but not takeout allowed. Fines for curfew-breakers. (AP PhotoLewis Joly)

BEIJING — China on Sunday reported 109 new confirmed COVID-19 cases, two-thirds of them in a northern province that abuts Beijing, and no deaths.

There were 72 new cases in Hebei province, where the government is building isolation hospitals with a total of 9,500 rooms to combat an upsurge in infections, according to the National Health Commission. 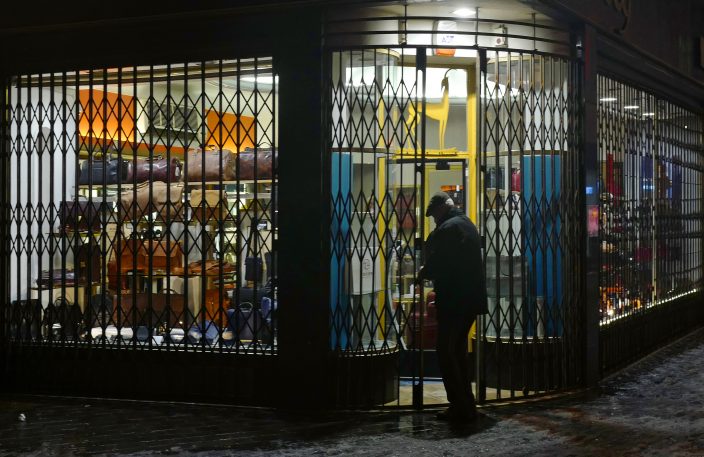 A man closes his stop at the start of the new curfew to counter the COVID-19, in Lille, northern France, Saturday, Jan 16, 2021. All of France will be under a stricter curfew starting Saturday at 6 p.m. for at least 15 days to fight the spread of the coronavirus. (AP PhotoMichel Spingler)

China had largely contained the virus that first was detected in the central city of Wuhan in late 2019 but has reported hundreds of new infections since December. The Health Commission on Saturday blamed them on travelers and imported goods it said brought the virus from abroad.

MEXICO CITY — Mexico posted its second straight day of more than 20,000 coronavirus cases Saturday, suggesting a surge in a country already struggling in many areas with overflowing hospitals.

There were 20,523 newly confirmed cases Saturday after 21,366 infections were reported Friday. That was about double the daily rate of increase just a week ago. Reporting normally declines on weekends, suggesting next week may bring even higher numbers.

The country also recorded 1,219 more deaths, a near-record. The country has now seen almost 1.63 million total infections and has registered over 140,000 deaths so far in the pandemic.

In Mexico City, the current center of the pandemic in Mexico, 88% percent of hospital beds are full.

BATON ROUGE, La. — Louisiana has identified the state’s first case of a coronavirus variant believed to be more transmissible than the original.

The governor’s office said Saturday the case was detected in a person in the New Orleans area.

The variant, first detected in Britain, has alarmed officials in many nations because studies indicate it may spread more easily than other viral strains, though it it is not believed to be more deadly and appears to be vulnerable to vaccines.

Gov. John Bel Edwards issued a statement saying it is urgent “that everyone double down on the mitigation measures that we know are effective in reducing the spread of the virus.”

Edwards noted that the variant has been detected in at least 15 other states.

In neighboring Texas, health officials in Dallas County on Saturday reported the state’s third case of the variant, this one in a Dallas man in his 20s with no history of travel outside the United States.

Texas reported a Houston-area man as its first case of a person infected with the new variant on Jan. 7.

The state’s pandemic totals increased to 260,090 cases and 3,761 deaths, according to Department of Health and Human Services data.

Nevada’s previous high number of deaths reported on a single day was 62 on Thursday.

The 311 deaths reported in the week since Jan. 10 were a pandemic one -week high for Nevada, surpassing the 299 deaths reported the previous week, the Las Vegas Review-Journal reported.

WILMINGTON, Del. — President-elect Joe Biden introduced his team of scientific advisers on Saturday, saying they will lead with “science and truth. We believe in both.”

Biden is elevating the position of science adviser to Cabinet level, a White House first. He called Eric Lander, a pioneer in mapping the human genome is in line to be director of the Office of Science and Technology Policy, “one of the most brilliant guys I know.”

Lander is the founding director of the Broad Institute of MIT and Harvard and was the lead author of the first paper announcing the details of the human genome.

Lander says Biden has tasked his advisers and “the whole scientific community and the American public” to “rise to this moment.”

Vice President-elect Kamala Harris recalled her late mother Shyamala Gopalan Harris, a cancer researcher, who she credited with teaching her to think critically.

As the rollout of coronavirus vaccines begins, the U.S. leads the world with 23.6 million cases and more than 393,000 confirmed deaths.

HONOLULU — Health officials in Hawaii have partnered with local pharmacies to offer drive-thru and in-home coronavirus vaccinations for residents.

Health officials reported 150 newly confirmed coronavirus cases and no new deaths on Friday. The state has more than 24,000 confirmed cases and more than 300 deaths since the start of the pandemic.

PIERRE, S.D. — South Dakota is looking to build its coronavirus rollout by making shots available to a larger group of people.

Secretary of Health Kim Malsam-Rysdon says the state will begin vaccinating people 80 and over and those with high-risk medical conditions. Some rural health care providers worry their patients will be missed by large hospital systems.

The Department of Health reported 341 positive tests, raising the confirmed total to 105,278.

OKLAHOMA CITY — The Oklahoma City school district is set to resume some in-person classes for the district’s youngest students and those in alternative education.

The district’s pre-kindergarten through 4th grade students and those in alternative education will begin returning Tuesday for alternating in-person and in-person classes. Students in grades 5-12 are scheduled to return on Feb. 1.

Oklahoma ranked fourth in the nation Saturday in the rate of new cases per capita with 1,448 per 100,000, according to data from Johns Hopkins University.

The state health department on Saturday reported 3,621 coronavirus cases and 27 deaths for confirmed totals of 351,665 cases and 2,952 deaths.

DALLAS —A third person with a case of the coronavirus variant has been reported in Texas.

Dallas County Health and Human Services reported Saturday that a Dallas man in his 20s with no history of travel outside the United States has tested positive for the variant that originated in the United Kingdom.

Texas is among a handful of states with at least one known case of the new variant that appears to spread more easily. But state health officials say there is no evidence it causes more severe disease, and say current vaccines are expected to still be effective.

Texas reported a Houston-area man as its first case of a person infected with the new variant on Jan. 7.

The state health department on Friday reported confirmed totals of more than 2 million cases and more than 31,00 deaths in Texas.