The International Ice Hockey Federation will make a decision in the coming days on whether to pull its world championship from Belarus as pressure increases from sponsors over a crackdown on opposition groups in the country.

German motor oil manufacturer Liqui Moly said Sunday it would cancel its sponsorship deal if the championship remains in Belarus, a day after carmaker Skoda vowed to do the same after 28 years as a sponsor of the event.

The Belarusian capital Minsk and Latvian capital Riga were picked in 2017 as co-hosts for the May 21-June 6 championship. Criticism of Belarus' involvement has grown since a disputed presidential election last year was followed by mass arrests at largely peaceful demonstrations. 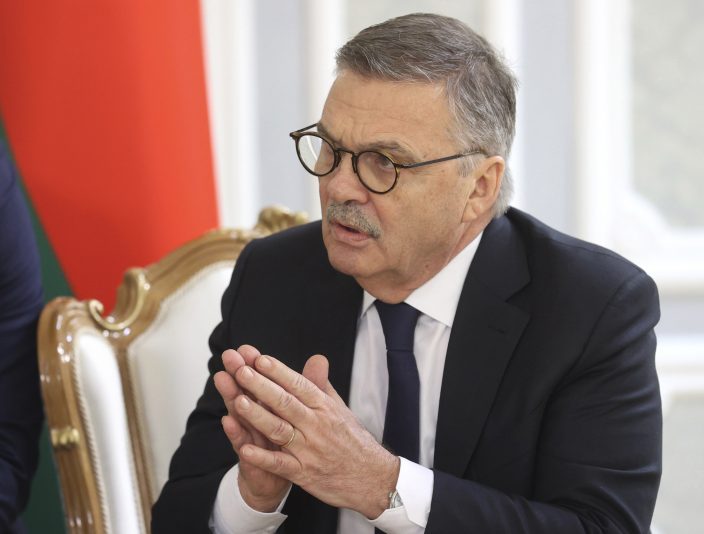 “If we cancel the games in Minsk, I think we should make a decision until the end of the month. This is the maximum, as we have to choose another place where we can play the championship," IIHF president Rene Fasel told The Associated Press in a recent interview.

“We were looking to a Plan B since the month of October as we realized that we would have a big challenge to go to Minsk, but we wanted to try, actually, everything possible, and that's also our duty."

Fasel met with longtime Belarus President Alexander Lukashenko in Minsk on Monday, saying he wanted to use the tournament to build bridges between Lukashenko and the opposition. However, opposition groups criticized Fasel after he was pictured embracing Lukashenko. Fasel said the gesture didn't mean the IIHF was taking sides in Belarusian politics.

“Hugging in a country like Belarus is an absolute normal fact,” he said. “Like you have a handshake, they do hugging. It was no bad intention in that from Alexander Lukashenko or from me.”

The Danish city of Herning, which hosted part of the 2018 championship, is a possible replacement for Minsk, Fasel said, and there have been initial talks with 2019 host nation Slovakia. Latvia could also host on its own, he added.

Speaking before the announcements from Liqui Moly and Skoda, Fasel said the IIHF was “financially solid” despite having to cancel last year's world championship in Switzerland because of the coronavirus pandemic. Fasel is due to step down as IIHF president later this year after 27 years in charge.

Mass protests swept Belarus, a former Soviet nation of 9.5 million people, after official results from the presidential election on Aug. 9 gave Lukashenko a landslide victory over his widely popular opponent, Sviatlana Tsikhanouskaya. She and her supporters refused to recognize the result, saying the vote was fraudulent.

Authorities have cracked down hard on the largely peaceful demonstrations, the biggest of which attracted up to 200,000 people. Police have used stun grenades, tear gas and truncheons to disperse the rallies.

NOT REAL NEWS: A look at what didn't happen this w ...

A roundup of some of the most popu ...