Running back Clyde Edwards-Helaire is inactive for the Kansas City Chiefs for their divisional playoff game against the Cleveland Browns, taking one dynamic playmaker away from Patrick Mahomes and the defending Super Bowl champions.

Edwards-Helaire returned to practice Wednesday for the first time since sustaining a high-ankle sprain in Week 15 against New Orleans. But the dynamic first-round pick, who piled up 1,100 yards from scrimmage in just 13 games this season, did not work out on Thursday or Friday and was listed as questionable on the final injury report.

That means Le’Veon Bell will start with Darrel Williams and Darwin Thompson backing him up. 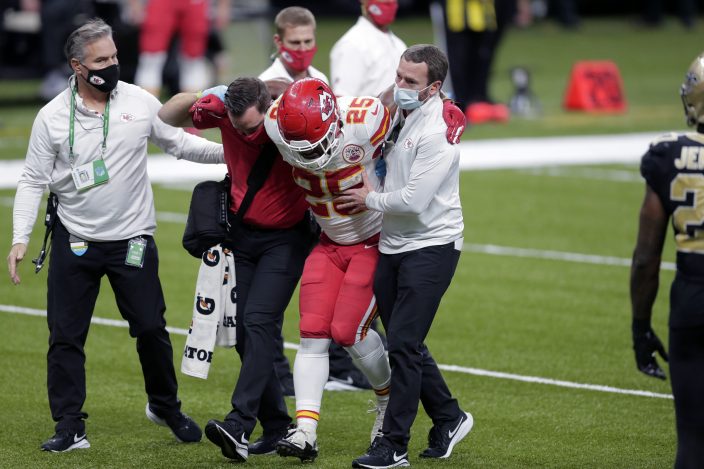 Kansas City Chiefs running back Clyde Edwards-Helaire (25) is helped off the field after being injured in the second half of an NFL football game against the New Orleans Saints in New Orleans, Sunday, Dec. 20, 2020. (AP PhotoBrett Duke)

Chiefs right tackle Mike Remmers is active after he was added to the injury report with an illness just 2 hours before kickoff. Remmers already is filling in for Mitchell Schwartz, who remains on injured reserve.

Also inactive for the Chiefs are wide receiver Sammy Watkins (calf) and linebacker Willie Gay Jr. (ankle), both of whom had been listed as out. Defensive back Rashad Fenton was questionable with an ankle injury but will not play Sunday, which means rookie L'Jarius Sneed will slide into the lineup when the Chiefs go to nickel and dime sets.

Pro Bowl guard Joel Bitonio is back for the Browns after missing last week's game with COVID-19, along with cornerbacks Denzel Ward and Kevin Johnson. As expected, linebacker B.J. Goodson is active despite a shoulder injury that limited him in practice, and tight ends Stephen Carlson (groin) and David Njoku (hamstring) are both available.