The Kansas City Chiefs had lost Patrick Mahomes to a concussion and were in danger of losing the game.

With their star quarterback reduced to a spectator, the oft-forgotten bunch opposite Mahomes' high-powered offense forced the Browns to punt in the waning minutes Sunday. Then, his 35-year-old backup showed some moxie with a long third-down scramble and fourth-down completion to Tyreek Hill — when audacious Andy Reid decided to go for it — with just over a minute left, giving the Chiefs a first down and allowing them to run out the clock. 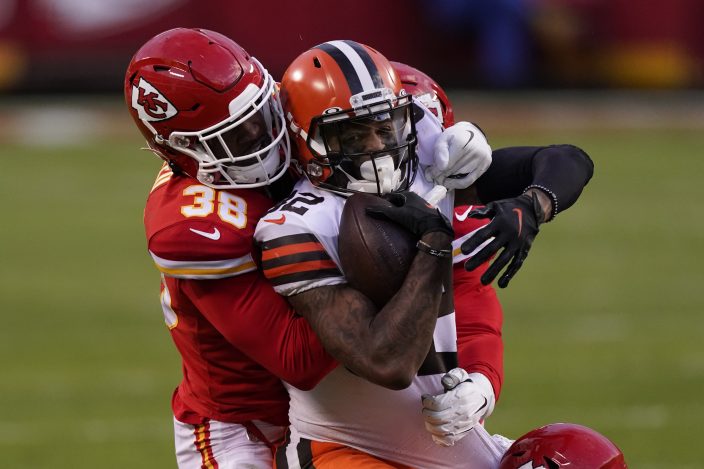 “That’s why we love Big Red. He’s always on time,” Chiefs safety Tyrann Mathieu said of the decision to go for the fourth down. “We always knew he has one play on the table.”

Mahomes hadn’t played in 21 days, since the Chiefs clinched the AFC’s top seed in Week 16, but he hardly missed a beat before leaving midway through the third quarter. He finished 21 of 30 for 255 yards and touchdowns passing and running. 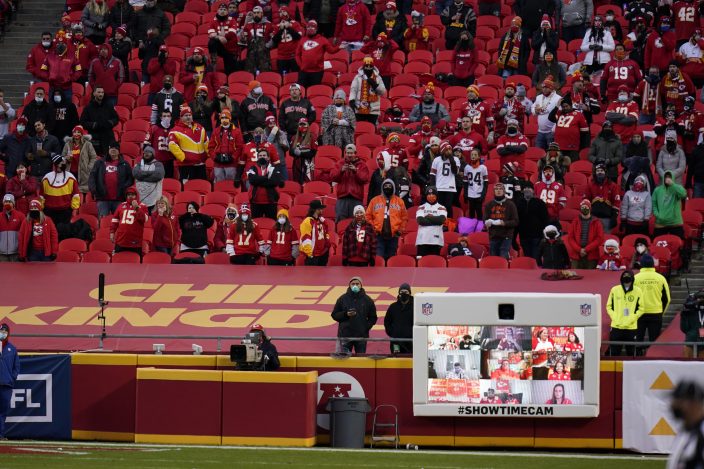 Fans watch from the stands during the second half of an NFL divisional round football game between the Kansas City Chiefs and the Cleveland Browns, Sunday, Jan. 17, 2021, in Kansas City. (AP PhotoJeff Roberson)

Baker Mayfield threw for 204 yards with a touchdown and an interception for the Browns, who were coming off their first playoff win since the 1994 season. But their inability to drive for the winning touchdown — they punted with 4:23 left in the game — kept them from winning two playoff games in a season for the first time since 1950.

Mahomes completed 11 of his first 12 passes and led the Chiefs to back-to-back touchdowns to start the game. Mahomes ran for the first and let Travis Kelce turn a dump-off into a 20-yard catch for the other, making him the first player since Steve Young in 1995 with three straight playoff games with TDs on the ground and through the air.

In fact, Mahomes was so sharp passing in the first half that he even completed a celebratory heave to a lucky fan in the far reaches of Arrowhead Stadium's upper deck following his touchdown jaunt. 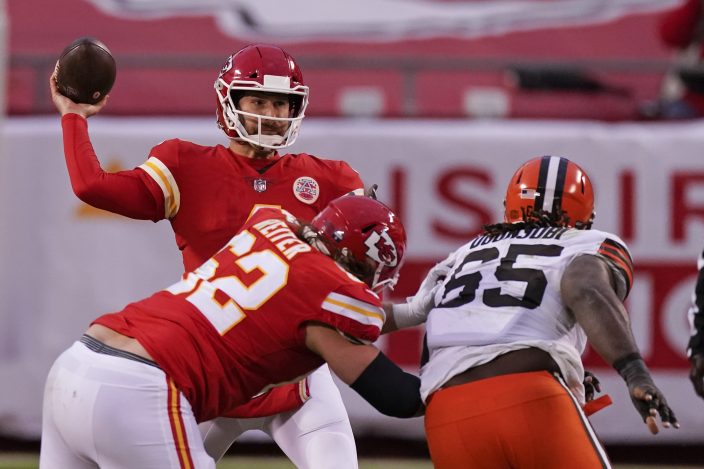 Kansas City Chiefs quarterback Chad Henne throws a pass during the second half of an NFL divisional round football game against the Cleveland Browns, Sunday, Jan. 17, 2021, in Kansas City. (AP PhotoCharlie Riedel)

After the teams swapped field goals, with Butker breaking the Chiefs playoff record with a 50-yarder into the wind, the Browns marched for what could have been a momentum-swinging score heading into halftime. But just when wide receiver Rashard Higgins tried to stretch over the goal line for a touchdown, the Chiefs' Daniel Sorensen arrived to deliver a hit, popping the ball loose and into the end zone for a touchback — the call stood after a video review.

Compounding the miscue for Cleveland? The Chiefs had 1:32 left, plenty of time for Mahomes to get them within range of Butker's strong right leg. His chip-shot field goal gave Kansas City a 19-3 halftime lead.

The entire complexion of the game changed early in the third quarter, though. 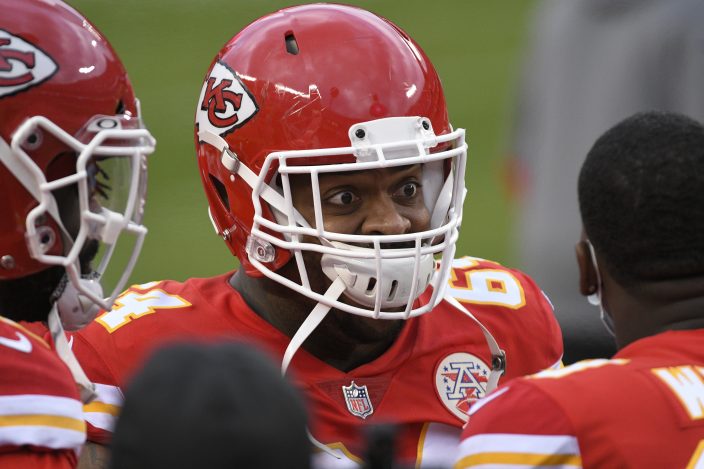 Kansas City Chiefs defensive tackle Mike Pennel talks with teammates on the sideline during the second half of an NFL divisional round football game against the Cleveland Browns, Sunday, Jan. 17, 2021, in Kansas City. (AP PhotoReed Hoffmann)

First, the Browns held the Chiefs when Mayfield threw an interception and Butker missed a field goal off the upright. Then, Mayfield led them briskly the other way, capping a 77-yard drive with a touchdown throw to Jarvis Landry. And finally, roughly 17,000 fans allowed into the stadium because of the pandemic were left sitting in stunned silence when Mahomes was tackled around the head with 7:27 left in the quarter and was left crumpled on the turf near midfield.

Mahomes, already hobbled by a foot injury, stumbled as he tried to get to his feet. He was eventually helped to the blue tent on the sideline, then ran to the locker room, where he was evaluated for a concussion.

The momentum finally turned, the Browns began to lean heavily on their vaunted run game, which had produced just 18 yards in the first half. Chubb converted on fourth down with a hard run, then Hunt followed another fourth-down conversion on the same drive by hitting the end zone against his former team to make it 22-17 with 11:07 to go. 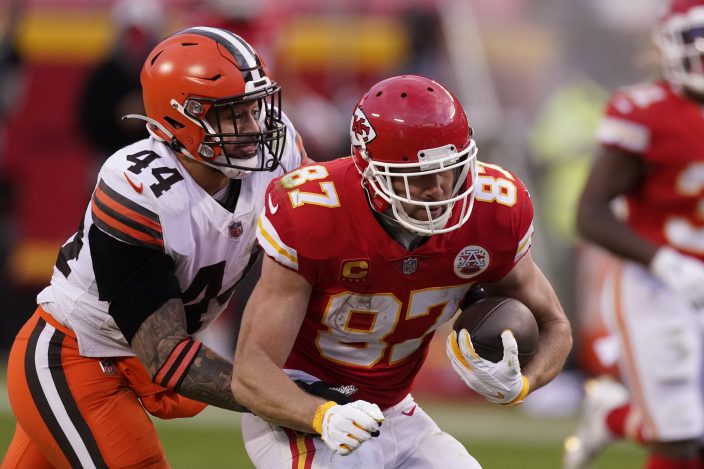 It remained with Cleveland when Karl Joseph picked off Henne in the end zone a few minutes later, but the Chiefs defense stuff Nick Chubb on first down, forced an incompletion and ultimately made Cleveland punt it away.

The Browns never got another chance.

BACK ON THE FIELD 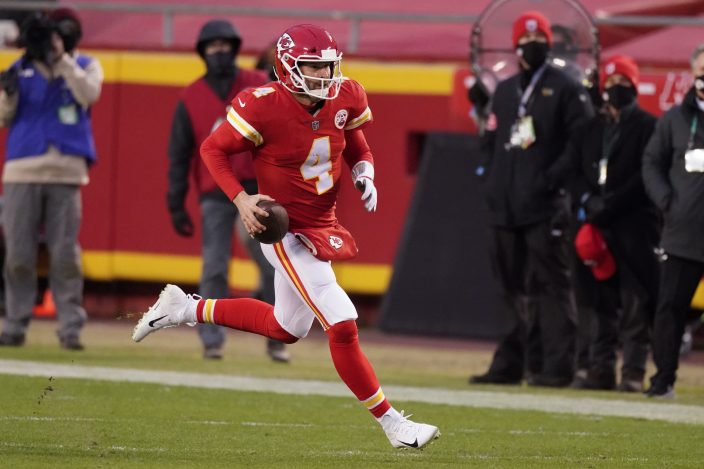 Kansas City Chiefs quarterback Chad Henne scrambles up field during the second half of an NFL divisional round football game against the Cleveland Browns, Sunday, Jan. 17, 2021, in Kansas City. (AP PhotoCharlie Riedel)

Browns coach Kevin Stefanski made his playoff head coaching debut after missing last week's game in Pittsburgh because of COVID-19. Pro Bowl OL Joel Bitonio and CBs Denzel Ward and Kevin Johnson also were back from their illnesses.

Chiefs: RB Clyde Edwards-Helaire (ankle) was inactive after returning to practice this week for the first time since mid-December. CB Bashaud Breeland left in the fourth quarter with a concussion.

The Chiefs begin preparing for the Bills next Sunday. They beat them 26-17 in Buffalo in Week 6.