As the rioters stormed the U.S. Capitol, many of the police officers had to decide on their own how to fight them off. There was no direction. No plan. And no top leadership.

One cop ran from one side of the building to another, fighting hand-to-hand against rioters. Another decided to respond to any calls of officers in distress and spent three hours helping cops who had been immobilized by bear spray or other chemicals.

Three officers were able to handcuff one rioter. But a crowd swarmed the group and took the arrested man away with the handcuffs still on. 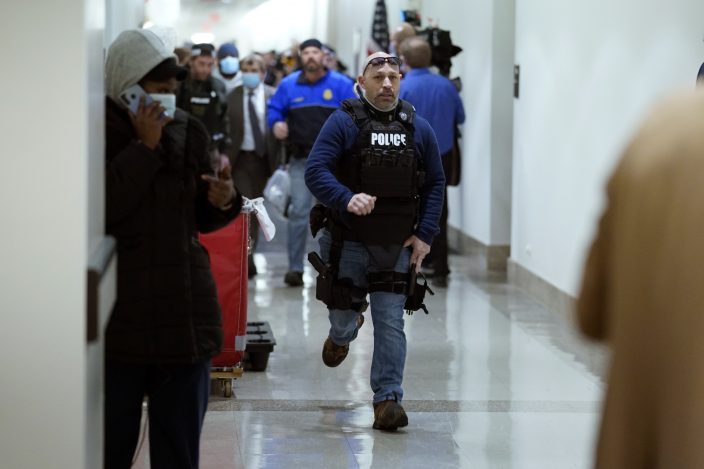 FILE- In this Jan. 6, 2021, file photo people run in the halls as rioters try to break into the House Chamber at the U.S. Capitol in Washington. (AP PhotoAndrew Harnik, File)

Interviews with four members of the U.S. Capitol Police who were overrun by rioters on Jan. 6 show just how quickly the command structure collapsed as throngs of people, egged on by President Donald Trump, set upon the Capitol. The officers spoke on condition of anonymity because the department has threatened to suspend anyone who speaks to the media.

“We were on our own,” one of the officers told The Associated Press. “Totally on our own.”

The officers who spoke to the AP said they were given next to no warning by leadership on the morning of Jan. 6 about what would become a growing force of thousands of rioters, many better armed than the officers themselves were. And once the riot began, they were given no instructions by the department’s leaders on how to stop the mob or rescue lawmakers who had barricaded themselves inside. There were only enough officers for a routine day. 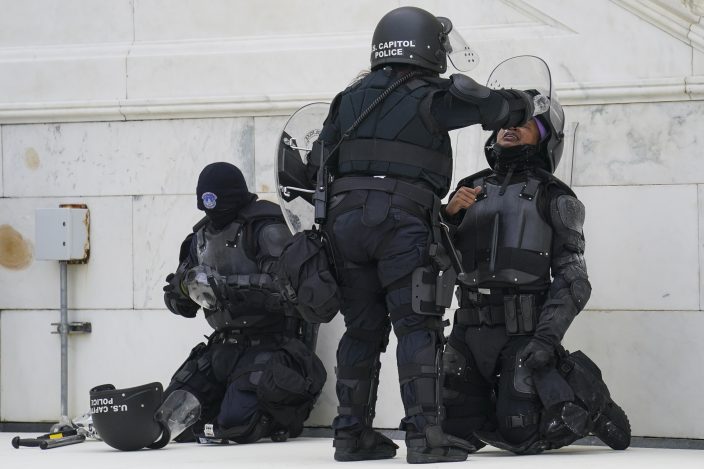 FILE - In this Jan. 6, 2021, file photo a police officer has eyes flushed with water after a confrontation with rioters at the Capitol in Washington. (AP PhotoJohn Minchillo, File)

Three officers told the AP they did not hear Chief Steven Sund on the radio the entire afternoon. It turned out he was sheltering with Vice President Mike Pence in a secure location for some of the siege. Sund resigned the next day.

His assistant chief, Yogananda Pittman, who is now interim chief, was heard over the radio telling the force to “lock the building down,” with no further instructions, two officers said.

One specific order came from Lt. Tarik Johnson, who told officers not to use deadly force outside the building as the rioters descended, the officers recounted. The order almost certainly prevented deaths and more chaos, but it meant officers didn’t pull their weapons and were fighting back with fists and batons. 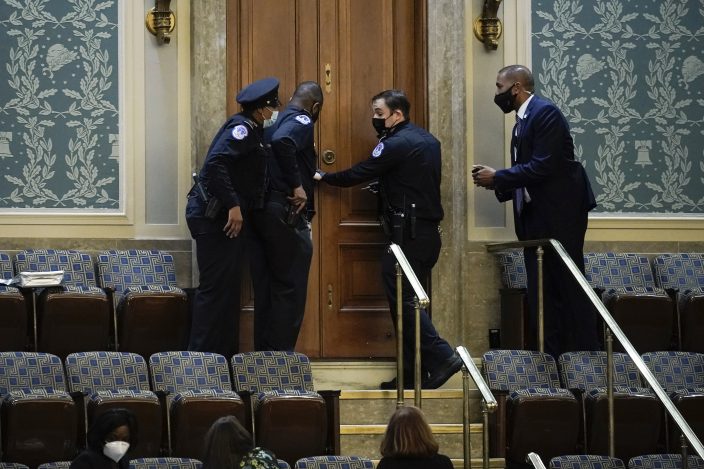 FILE - In this Jan. 6, 2021, file photo U.S. Capitol Police secure a door as rioters try to break into the House Chamber at the U.S. Capitol in Washington. (AP PhotoJ. Scott Applewhite, File)

Johnson has been suspended after being captured on video wearing a “Make America Great Again” hat while moving through crowds of rioters. Johnson told colleagues he wore the hat as a tactic to gain the crowd’s confidence as he tried to reach other officers who were pinned down by rioters, one of the officers said. A video of the incident obtained by the Wall Street Journal shows Johnson asking rioters for help in getting his colleagues.

Johnson, who could not be reached for comment, was heard by an officer on the radio repeatedly asking, “Does anybody have a plan?”

The Capitol Police has more than 2,300 staff and a budget that’s grown rapidly over the last two decades to roughly $500 million, making it larger than many major metro police departments. Minneapolis, for example, has 840 officers and a $176 million budget. 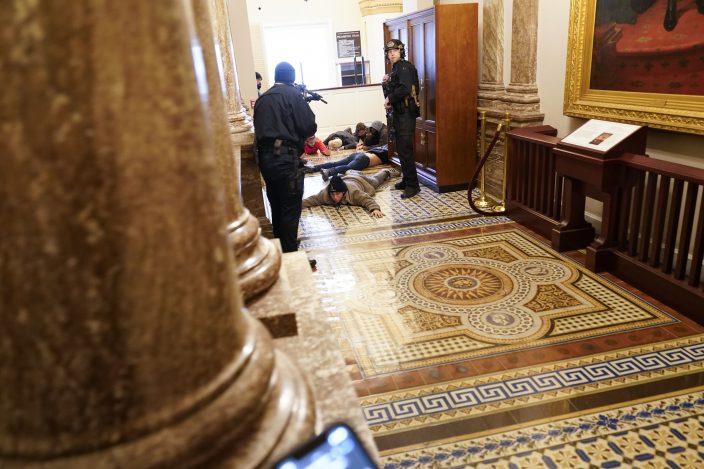 Despite plenty of online warnings of a possible insurrection and ample resources and time to prepare, the Capitol Police planned only for a free speech demonstration on Jan. 6.

They rejected offers of support from the Pentagon three days before the siege, according to senior defense officials and two people familiar with the matter. And during the riot, they turned down an offer by the Justice Department to have FBI agents come in as reinforcements. The officials spoke to the AP on condition of anonymity to discuss the decision-making process.

The riot left five people dead, including Capitol Police Officer Brian Sicknick, who was hit in the head by a fire extinguisher. Another officer died in an apparent suicide after the attack. 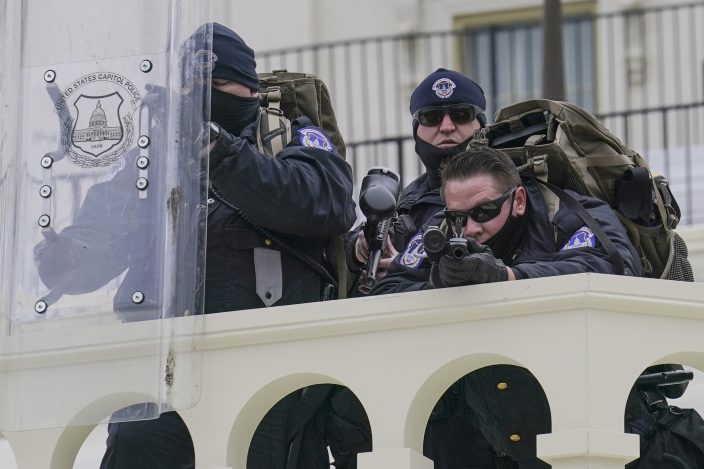 FILE - In this Jan. 6, 2021, file photo police keep a watch on rioters who tried to break through a police barrier at the Capitol in Washington. (AP PhotoJohn Minchillo, File)

The attack has forced a reckoning among law enforcement agencies. Federal watchdogs launched a sweeping review of how the FBI, the Pentagon and other agencies responded to the riot, including whether there were failures in information sharing and other preparations that left the historic symbol of democracy vulnerable to assault.

Top decision-makers have offered differing explanations for why they didn't have enough personnel. 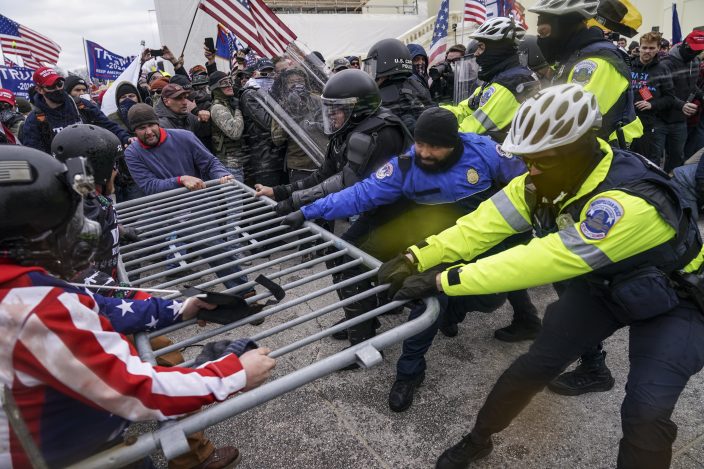 FILE - In this Jan. 6, 2021, file photo rioters try to break through a police barrier at the Capitol in Washington. (AP PhotoJohn Minchillo, File)

House Speaker Nancy Pelosi’s deputy chief of staff, Drew Hammill, said congressional leaders had not been informed of any request for the National Guard before the day of the riot. The office of Sen. Mitch McConnell, the Republican leader, declined to comment.

It's not clear why the threat was not taken more seriously.

John Donohue, a 32-year veteran of the New York Police Department who advises the Capitol Police on intelligence matters, sent a memo on Jan. 3 warning of the potential for an attack on Congress from the pro-Trump crowd, according to two law enforcement officials with knowledge of the memo first reported by The Washington Post. They spoke on condition of anonymity to discuss the internal memo. 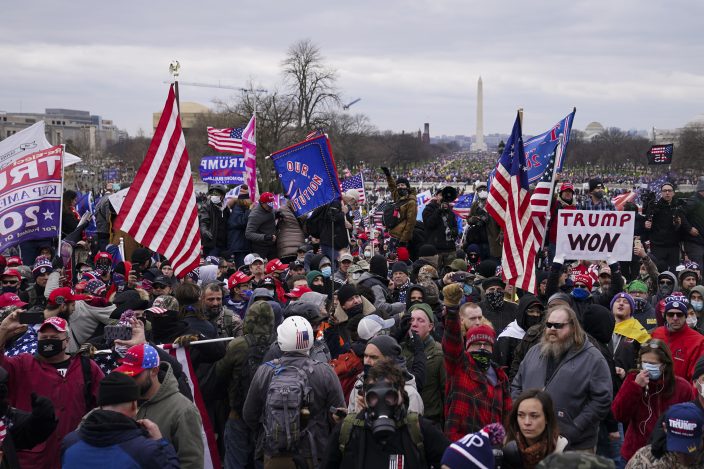 Trump supporters gather outside the Capitol, Wednesday, Jan. 6, 2021, in Washington. As Congress prepares to affirm President-elect Joe Biden's victory, thousands of people have gathered to show their support for President Donald Trump and his claims of election fraud. (AP PhotoJohn Minchillo)

Donohue was well-versed in the extremist threat. At a congressional hearing in July, before he starting advising the Capitol Police, Donohue told lawmakers the federal government needed a system to better monitor social media for domestic extremists.

“America is at a crossroads," he said in his testimony. “The intersection of constitutional rights and legitimate law enforcement has never been more at risk by domestic actors as it is now as seditionists actively promote a revolution.”

Tens of thousands of National Guard members have now been called to secure the Capitol in advance of the inauguration of President-elect Joe Biden on Wednesday.

A spokeswoman for Capitol Police did not respond to questions Friday.

For major events, the Capitol Police normally holds meetings to brief officers on their responsibilities and plans in case of an emergency. Three of the officers interviewed by the AP said there were no meetings on or before Jan. 6. It’s also unclear whether the department held over its overnight shift or called in more officers early to help those who would be on duty that day.

“During the 4th of July concerts and the Memorial Day concerts, we don’t have people come up and say, ‘We’re going to seize the Capitol,‘” one officer said. “But yet, you bring everybody in, you meet before. That never happened for this event.”

Another officer said he was only told that morning to pick up a riot helmet. He said he had training on dealing with large crowds, but not on how to handle a riot.

“We were under the impression it was just going to be a lot of yelling, cursing,” he said.

As Trump called on his supporters to go to the Capitol, telling them to “fight like hell,” members of the House and Senate were inside the building to certify Biden’s victory over Trump in the Electoral College.

Crowds of Trump supporters, many of them linked to far-right or white supremacist groups, began gathering on both sides of the Capitol.

An officer working the western front of the building, which faces the White House and where risers were set up for the inauguration, quickly realized that the crowds were not peaceful. The rioters began breaking down short fences and systematically clipping off “Area Closed” signs, the officer said.

Videos from the event show the crowd climbing the walls on the western side and eventually breaching the building.

One officer listed the various weapons used to hit him and people near him: batons, flagpoles, sections of fencing, batteries, rubber bullets and canisters of bear spray that went further than the chemicals the officers themselves had. Some of the rioters showed their badges from other law enforcement agencies, claiming they were on the side of the Capitol Police, the officer said.

Most of the insurrectionists left without being arrested, which officers who spoke to the AP say was because it was next to impossible to arrest them given how badly the force was outnumbered. That was underscored by the rioters taking away a man who officers had tried to arrest inside the Capitol.

“The group came and snatched him and took him away in cuffs,” one officer said. “Outside of shooting people, what are you supposed to do?”