Hundreds of Honduran migrants awoke tired and hungry Monday after a second night stuck along a rural Guatemalan roadside by police and soldiers who will not let them pass.

A steep mountain and tall wall flanking the rural highway have allowed Guatemalan authorities to bottle up the group that had numbered about 2,000 when it pushed into Guatemala Friday night.

Their ranks have reduced through attrition as some migrants have agreed to be bused back to the Honduran border. A smaller number have been forcefully sent back after scuffling with authorities who held their line with baton strikes and tear gas. 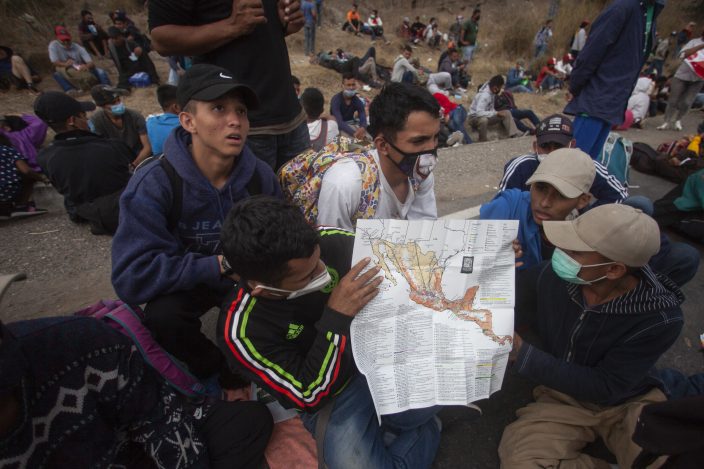 Honduran migrants show their route on a map of Mexico and Central America to reporters, as they sit near a police roadblock at a highway in Vado Hondo, Guatemala, Sunday, Jan. 17, 2021. Guatemalan police and soldiers used tear gas and wielded batons and shields against a group of Honduran migrants that tried to push through their roadblock. (AP PhotoSandra Sebastian)

Guatemala’s immigration authorities said Monday that another group of about 800 migrants had been located about 40 kilometers farther north along the highway near Rio Hondo. They are also blocked from advancing there, but authorities said they successfully negotiated opening one lane of traffic so vehicles could pass.

In total, some 8,000 to 9,000 Honduran migrants were believed to have entered Guatemala in the year’s first caravan after departing from San Pedro Sula, Honduras early Friday. Honduras has been battered by the COVID-19 pandemic and two major hurricanes that struck in November, leaving thousands homeless. That's on top of the existing lack of economic opportunity and persistent gang violence.

In Vado Hondo Monday, site of the roadblock outside Chiquimula, migrants leaned against the wall or sat up after a fitful night’s sleep in the brush along the road or on the pavement. Some migrants had drifted back to the town in search of food or shade to wait out the stalemate. 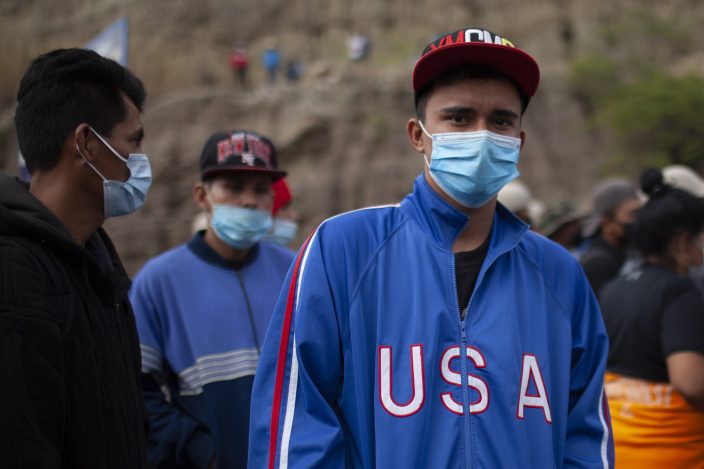 Honduran migrants stand on the side of the road near a police roadblock at a highway in Vado Hondo, Guatemala, Sunday, Jan. 17, 2021. Guatemalan police and soldiers have used tear gas and wielded batons and shields against a group of Honduran migrants that tried to push through their roadblock. (AP PhotoSandra Sebastian)

Traffic, especially semi-trailers, were backed up for miles. Locals picked their way among the migrants and were allowed to pass the lines of police and soldiers.

On Sunday, Guatemala’s Health Ministry reported that 21 of the migrants who sought medical attention at health centers had tested positive for the coronavirus. The department said the 12 men and nine women would not be returned to Honduras until they undergo quarantine at centers in Guatemala.

Even if the migrants manage to find their way to the Mexican border, that government has made a show of force with thousands of National Guard members and immigration agents waiting there. 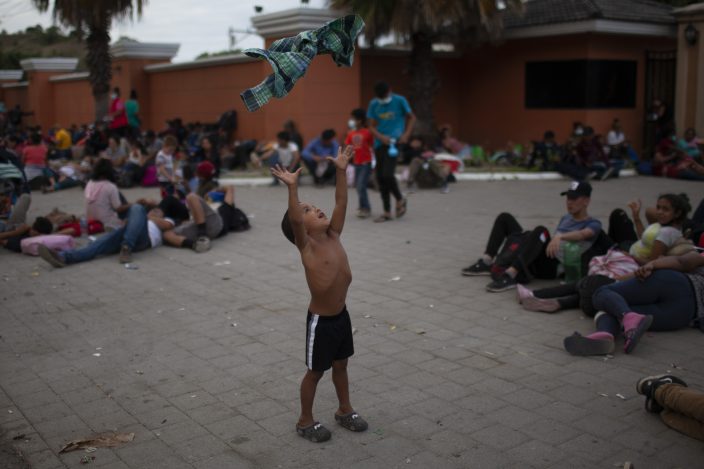 A boy plays with his shirt as Honduran migrants rest and wait in front of a police roadblock on the highway in Vado Hondo, Guatemala, Guatemala, Sunday, Jan. 17, 2021. Guatemalan police and soldiers launched tear gas and wielded batons and shields against migrants who tried to push through their roadblock early Sunday. (AP PhotoSandra Sebastian)

Mexico has said it would enforce its immigration laws and require an orderly crossing.

“We are proposing that they seek a dialogue with the migrants, in Honduras, Guatemala,” President Andrés Manuel López Obrador said Monday. “They should attend to them so that they don’t enter any country by force.”