Chancellor Angela Merkel is holding a virtual meeting Tuesday with the governors of Germany's 16 states to discuss the country's pandemic measures amid concerns that new mutations of the coronavirus could trigger a fresh surge in cases.

Germany's infection rate has stabilized in recent days, indicating that existing restrictions may have been effective in bringing down the numbers. The 7-day rolling average of daily new infections declined over the past two weeks, going from 21.36 new cases per 100,000 people on Jan. 3 to 20.58 on Jan. 17.

“The measures are having a certain effect,” government spokesman Steffen Seibert said Monday. “Many people are abiding by them and that's gratifying.” 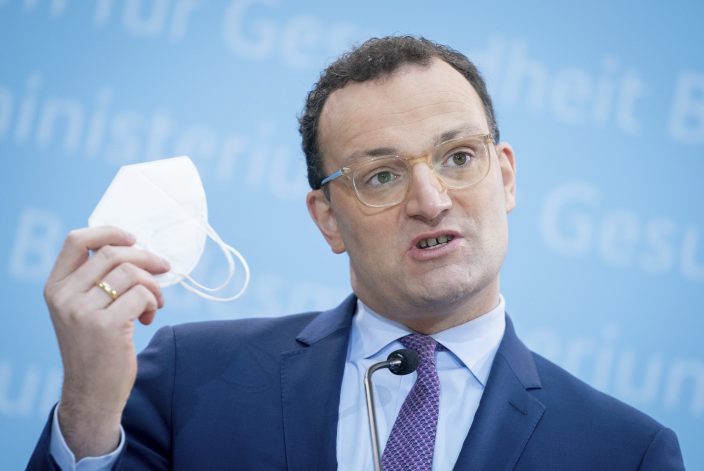 But he said a meeting initially planned for Jan. 25 had been brought forward due to the variants.

“The reason is the mutation of the virus that has appeared, which is contributing to already considerable increases in infections for example in Great Britain and Ireland,” said Seibert. “That is a risk that responsible policy-making must focus on, and sooner rather than later.”

A member of staff at the university hospital holds syringes with the Moderna vaccine against COVID-19 in Duesseldorf, Monday, Jan. 18, 2021. (Federico Gambarinidpa via AP)

Jens Spahn said he is ordering laboratories to sequence the genome of 5% of positive samples, or up to 10% if case numbers fall.

Germany's most populous state of North Rhine-Westphalia began vaccinating hospital workers Monday, three weeks after the first shots were administered to nursing home residents, a delay that had led to grumbling among medical staff.

“I would have wished for it to happen at the same time,” said Dr. Jochen A. Werner, medical director of Essen University Hospital. “Delaying it further would have been unacceptable for many reasons.”

Daniel Niemann in Essen contributed to this report.

Merkel says German vaccine centers will be full by April

Virus variant accounts for 6% of cases in Germany, rising

Germany seeks ways to give its vaccine campaign momentum