When Joe Biden entered the White House as vice president, the economy was cratering. Job losses were mounting. Stocks were crashing. Millions of Americans were in the early stages of losing their homes to foreclosure as the housing bubble burst.

Biden returns to the White House as president a dozen years later with the economy battered and shaken by a pandemic. But this time is different — and it could reset the nation’s politics if Biden and Democrats can count on a level of growth not seen in a generation.

Despite the 9.8 million jobs lost due to the coronavirus, there are signs the country is on the cusp of a kind of boom unseen in the Obama and Trump eras. 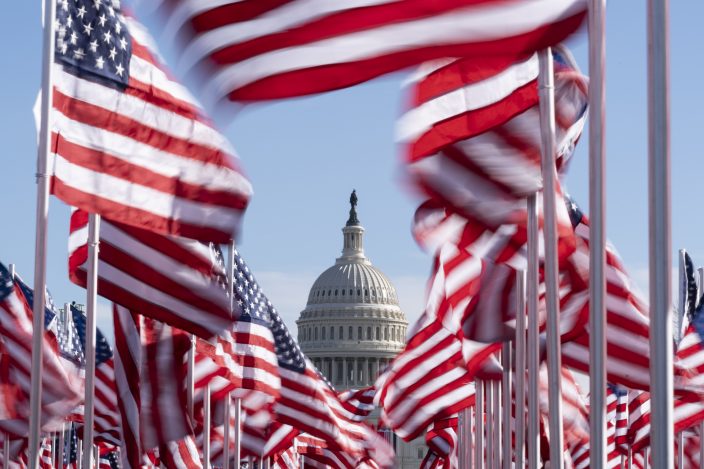 The U.S. Capitol is seen between flags placed on the National Mall ahead of the inauguration of President-elect Joe Biden and Vice President-elect Kamala Harris, Monday, Jan. 18, 2021, in Washington. (AP PhotoAlex Brandon)

Checking account balances have surged by $2.4 trillion since the outbreak began. Home prices are soaring because of hot demand. And each additional vaccination moves the world’s largest economy closer to fully re-opening.

“If the economy is improving substantially by spring or early summer, that might actually help Biden get more of his agenda done ... because success can beget success," said Jason Furman, who was top economist for the Obama administration. He pointed to the possibility of growth easing the path for an infrastructure program and climate investments.

But hanging over any effort to boost the economy is an enduring partisan divide that contributed to the deadly assault on the U.S. Capitol this month as Biden’s Electoral College victory was set to be certified. Politics is increasingly shaping how Americans feel about the economy, scrambling the political incentives for lawmakers to cooperate. 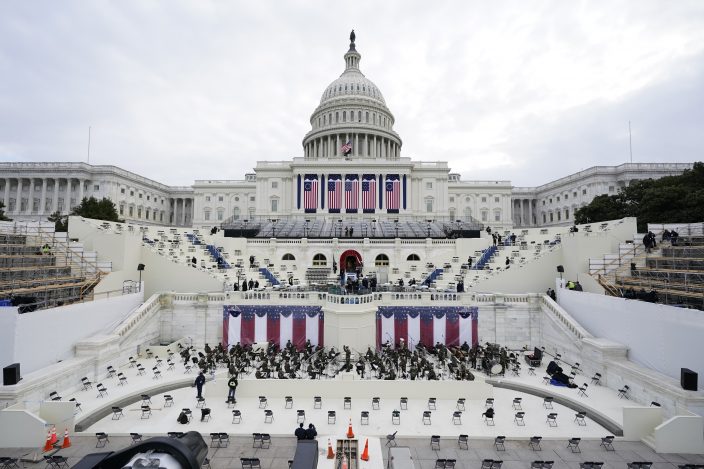 Preparations are made prior to a dress rehearsal for the 59th inaugural ceremony for President-elect Joe Biden and Vice President-elect Kamala Harris on Monday, January 18, 2021 at the U.S. Capitol in Washington. (AP PhotoPatrick Semansky, Pool)

There also are concerns about whether the worsening pandemic and slow pace of vaccinations thus far could portend more serious problems on the coronavirus front that could hurt the economic recovery.

The potential for a boom reflects in large part the roughly $4 trillion approved so far in federal aid, with Biden last week proposing $1.9 trillion more, an unprecedented level of stimulus. The additional money, which must be approved by Congress, is intended to accelerate the vaccine rollout, reopen schools and reduce the child poverty rate to a historic low.

The investment bank Goldman Sachs estimates that growth this year could be 6.6% if part of Biden's stimulus plan passes. That would be the strongest gain since 1984, when a 7.2% increase in the gross domestic product helped carry Republican President Ronald Reagan to a second term in a landslide. Wells Fargo forecasts growth of 4.6% this year, which would be the best since 1999. 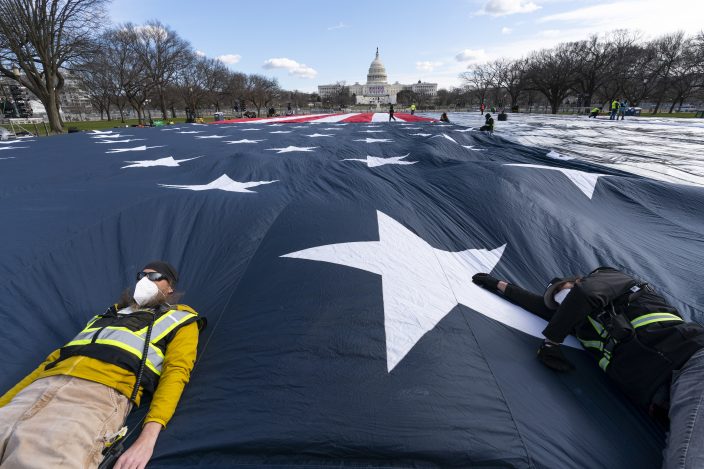 Workers use their body weight to hold down a large American flag placed on the National Mall, with the U.S. Capitol behind them, ahead of the inauguration of President-elect Joe Biden and Vice President-elect Kamala Harris, Monday, Jan. 18, 2021, in Washington. (AP PhotoAlex Brandon)

Still, there are plenty of economic risks facing Biden. The most bullish forecasts hinge on getting much of Biden's aid package through Congress. And any gains would probably depend on overcoming the pandemic. There is also the possibility that the added stimulus championed by Biden could be more than the economy needs, perhaps stirring inflation.

But the Great Recession taught Biden's team the benefit of going big with stimulus. Incoming White House Chief of Staff Ron Klain says Biden's officials learned the hard way that the roughly $800 billion approved in 2009 to fight the Great Recession was insufficient, a mistake they’re unwilling to repeat this time.

“It wasn’t large enough,” Klain said Friday at a livestreamed Washington Post event. “Our recovery lagged as a result.” 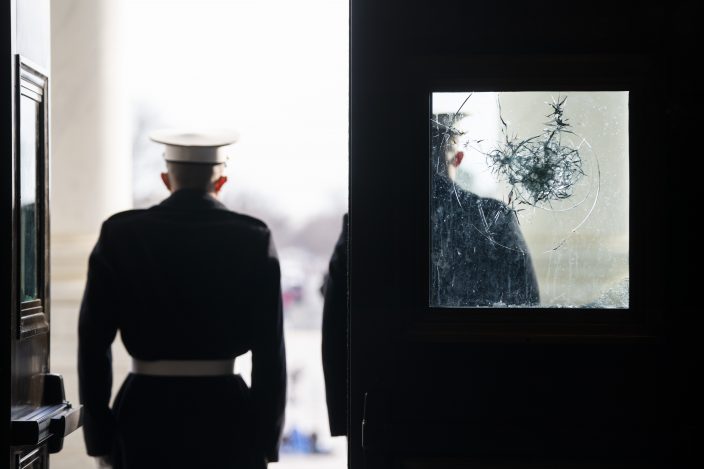 U.S. Marine Corps. sentries outside a damaged door at the Capitol during a rehearsal for the 59th inaugural ceremony for President-elect Joe Biden and Vice President-elect Kamala Harris on Monday, January 18, 2021 at the U.S. Capitol in Washington. (Jim Lo ScalzoPool via AP)

During the first nine months of the Obama presidency, the unemployment rate climbed to 10% and the swift recovery that was predicted never happened as the country took years to work through housing foreclosures and rebuild its financial system.

This left Obama administration officials having to argue that the economy would have been even worse without the stimulus. Republicans countered that the effort had flopped as they won control of the House in the 2010 midterm elections.

“There isn’t much doubt that the economy did better in 2009 and 2010 because of the recovery act,” said Douglas Elmendorf, who was director of the Congressional Budget Office at the time and now serves as dean of Harvard University’s Kennedy School. “Too many people took the failure to hit (stronger growth) as a sign that the stimulus didn’t work, when, in fact, the economy was worse off than widely understood.”

Biden can count on backing from Wall Street investors this time to borrow. Helped by supportive Federal Reserve policies, low interest rates make it easier to keep financing a stimulus and repay added debt. The interest rate on a 10-year U.S. Treasury note is about 1.15%, compared with 11.67% in 1984 when growth prospects last looked this good and the size of the federal debt was significantly smaller.

Republican lawmakers still see the need for more aid to contain the pandemic, but some are voicing concerns about Biden’s desire for another big spending package. They stress that any new spending should be directed toward increasing vaccinations and that his proposal for direct checks of $1,400 per person could delay people from returning to work.

“Blasting out another $2 trillion in borrowed or printed money — when the ink on December’s $1 trillion aid bill is barely dry and much of the money is not yet spent — would be a colossal waste and economically harmful,” Republican Sen. Pat Toomey of Pennsylvania said in a statement.

Republican voters have already turned bearish on the economy after President Donald Trump lost. The University of Michigan reported Friday that its index of consumer expectations among Republicans plunged from a reading of 96 in October to 53 in January. That could dampen their willingness to spend and encourage Republican lawmakers to blame Democrats for any economic ills.

For now, the Biden team is hoping to push through its stimulus with Republican support in the Senate. But the political tensions might force him to pursue many of his initiatives — like a $15 minimum wage and tax increases on corporations and the wealthy — with only Democratic support.

Should Republicans regain control in Congress, any policies passed exclusively with Democratic backing could be quickly reversed or allowed to expire. This seesawing between conflicting policies could erode the degree of certainty that businesses and consumers need to make investments that lead to growth, said Donald Schneider, a member of the policy research team at Cornerstone Macro and former chief economist of the House Ways and Means Committee.

“It is a big problem going forward if one side comes to power and makes changes and then the other side comes into power and reverses them and on and on it goes,” Schneider said.