Samantha Mewis scored three goals and her big sister Kristie Mewis added another to give the United States a 4-0 exhibition victory over short-handed Colombia on Monday.

The U.S. extended its unbeaten streak to 33 matches. The defending World Cup champions have a 49-game undefeated streak on home soil.

The teams were set to play at Exploria Stadium again on Friday. 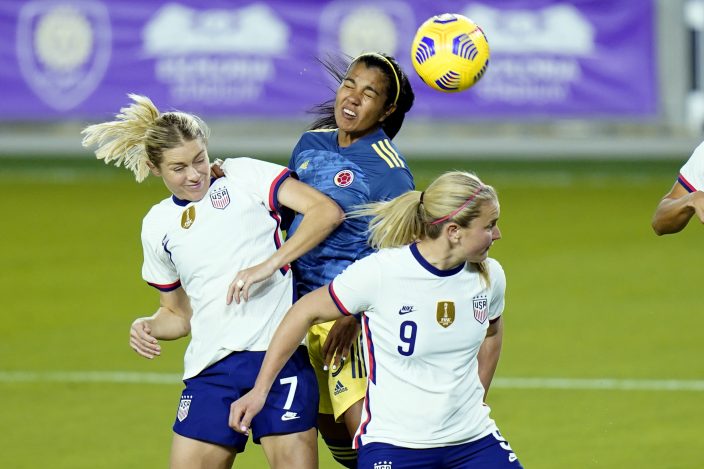 Colombia defender Daniela Arias, center, tries to head the ball to the goal off a corner kick as she is defended by United States defender Abby Dahlkemper (7) and midfielder Lindsey Horan (9) during the first half of an international friendly soccer match, Monday, Jan. 18, 2021, in Orlando, Fla. (AP PhotoJohn Raoux)

It was the first home game for the Americans since the SheBelieves Cup last March. Colombia did not play a match last year.

Alex Morgan was not with the team because she contracted the coronavirus over the holidays. Carli Lloyd started up top against the Colombians.

Megan Rapinoe also started after taking much of last year off because of concern over COVID-19. 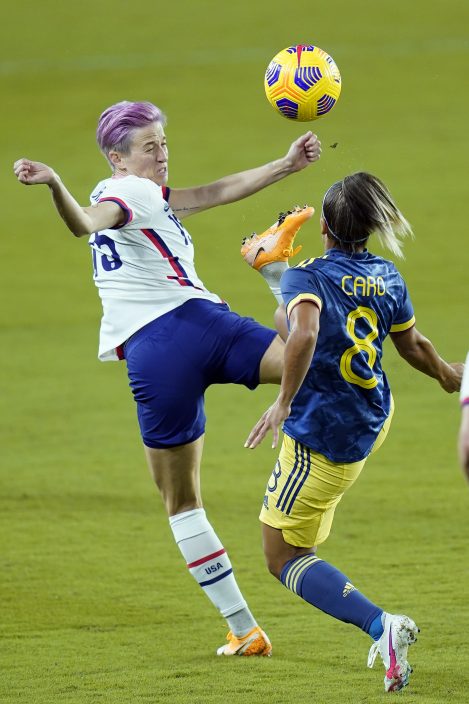 United States forward Megan Rapinoe, left tries to control the ball as she gets in front of Colombia midfielder Jessica Caro (8) during the first half of an international friendly soccer match, Monday, Jan. 18, 2021, in Orlando, Fla. (AP PhotoJohn Raoux)

Rapinoe served up a perfectly placed cross to Samantha Mewis in front of the goal in the fourth minute.

Samantha Mewis, who plays for Manchester City of the FA Women's Super League, scored again in the 33rd minute. She converted a penalty kick early in the second half to complete the hat trick.

Kristie Mewis, who came in as a substitute in the second half, scored in the 86th minute. It was her third international goal. 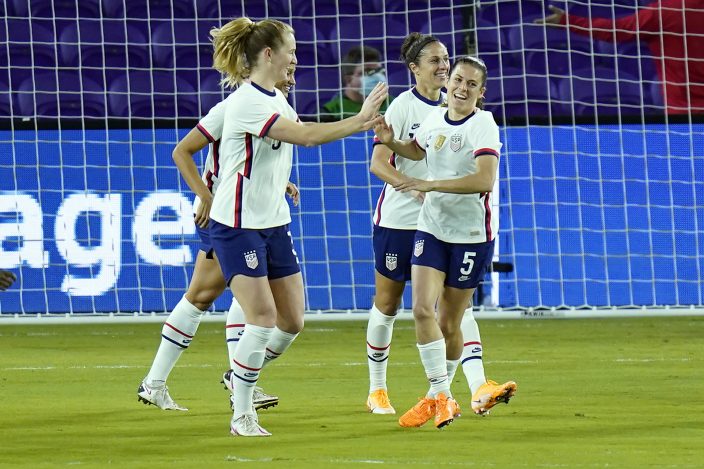 Catarina Macario came off the bench for the second half, making her first appearance for the national team. Macario, who was born in Brazil, became a U.S. citizen last fall and recently received approval from FIFA to play for the Americans.

Macario decided to forgo her senior season at Stanford and sign with French powerhouse Lyon.

Colombia was without three players — midfielders Daniela Montoya, Diana Carolina Ospina and defender Carolina Arias — who were in isolation because of COVID-19 tracing protocols. A fourth player, midfielder Ana Gabriela Huertas, had inconclusive test results and was ruled out of the match. Those players could be available on Friday.

U.S. coach Vlatko Andonovski announced before the game that defender Becky Sauerbrunn would take over as team captain. In recent years, the captain’s armband was passed among a group of veterans, including Rapinoe and Lloyd.

Andonovski, who replaced Jill Ellis after she stepped down following the 2019 World Cup victory, is 12-0-0 as the U.S coach.