Joe Biden has given himself an imposing to-do list for his earliest days as president and many promises to keep over the longer haul.

Overshadowing everything at the very start is Biden's effort to win congressional approval of a $1.9 trillion plan to combat the coronavirus and the economic misery it has caused.

But climate change, immigration, health care and more will be competing for attention — and dollars. Altogether Biden has laid out an ambitious if not always detailed set of plans and promises across the range of public policy. 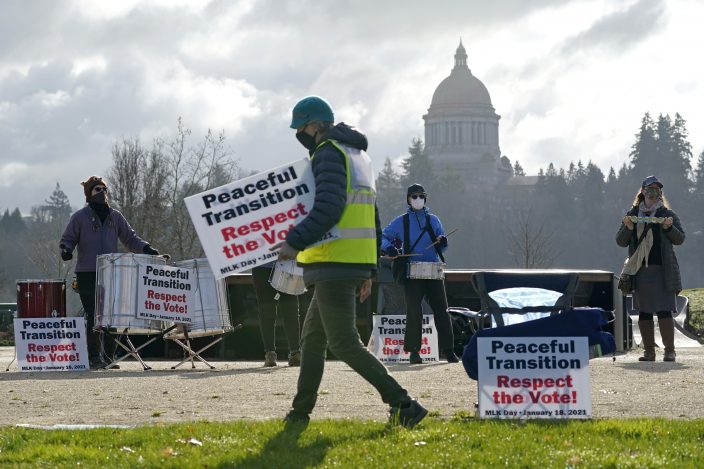 A person walks with a sign near a drum circle during a vigil supporting a peaceful transition from President Donald Trump to President-elect Joe Biden, Monday, Jan. 18, 2021, in Olympia, Wash. More than 100 people took part in the demonstration ahead of Biden's upcoming inauguration on Wednesday. (AP PhotoTed S. Warren)

Drawn from a review of his campaign statements and a recent memo from Ron Klain, who'll be his chief of staff, here's a sampling of measures to expect right away, around the corner and beyond:

WEDNESDAY, after the inauguration, mostly by executive action:

— Declaration that the U.S. is rejoining Paris climate accord. 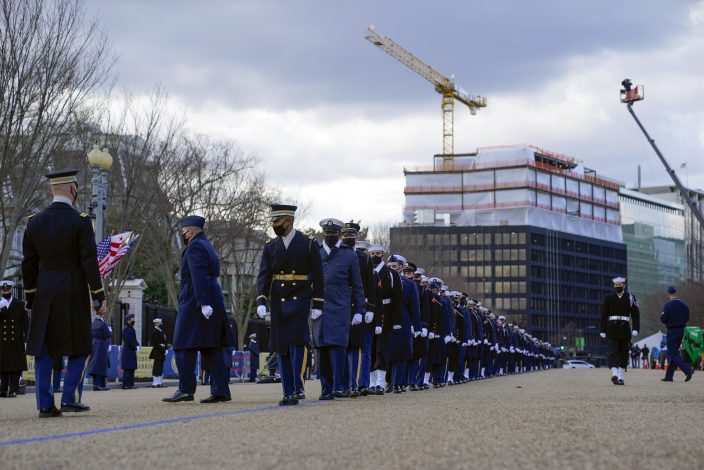 Members of the military march in formation on Pennsylvania Avenue in front of the White House in Washington, as they rehearse ahead of President-elect Joe Biden's inauguration ceremony, Monday, Jan. 18, 2021. (AP PhotoPablo Martinez Monsivais)

— Declaration that the U.S. is rejoining World Health Organization.

— Ethical standards for his administration and an order prohibiting interference in the operations of the Justice Department from other parts of government.

— Start of a process to restore 100 public health and environmental rules that the Obama administration created and President Donald Trump eliminated or weakened.

— Start of a process to rejoin the deal restraining Iran's nuclear program in exchange for sanctions relief.

— Executive action to end travel restrictions on people from a variety of Muslim-majority countries.

— Executive action to protect from deportation people who came to the country illegally as children.

— Executive action to make masks mandatory on federal property and when travelling out of state. Others will be asked to wear masks for 100 days.

— Steps to extend pandemic-era restrictions on evictions and foreclosures.

— Legislation to go to Congress proposing to repeal liability protections for gun manufacturers and tightening some other aspects of gun control.

— Immigration legislation to go to Congress as part of an effort to offer a path to citizenship for 11 million people in the U.S. illegally and to codify protections for people who came illegally as children.

— Education Department to be asked to extend the existing pause on student loan payments and interest for millions with student debt.

— Directive to agencies to take unspecified immediate action to deliver economic relief from the pandemic.

— First steps to expand access to health care, for low-income women, women of color and other segments of the population.

BEYOND (some may be tried sooner)

— Ensure 100 million vaccines have been given before the end of his first 100 days.

— Ensure 100 federally supported vaccination centers are up and running in his first month.

— Expand use of the Defense Production Act to direct the manufacture of critical pandemic supplies.

— Win passage of a $2 trillion climate package to get the U.S. to net-zero carbon emissions by 2050.

— Make a plan within 100 days to end homelessness.

— Freeze deportations for 100 days, then restore the Obama-era principle of deporting foreigners who are seen as posing a national security threat or who have committed crimes in addition to the crime of illegal entry, thereby pulling back the broad deportation policy of the Trump years.

— Halt financing of further construction of the wall along the Mexican border.

— Within 100 days, establish a police oversight commission to combat institutional racism by then.

— Reinstate federal guidance, issued by Obama and revoked by Trump, to protect transgender students’ access to sports, bathrooms and locker rooms in accordance with their gender identity.

— Restore Obama-era rules on campus sexual misconduct and a policy that aimed to cut federal money to for-profit colleges that left students with heavy debt they can't pay back.

— Support legislation to make two years of community college free and to make public colleges free for families with incomes below $125,000, with no repayment of student loans required for people who make less than $25,000 a year and, for others, no repayment rate above 5% of discretionary income.

— Try to win passage of a plan to spend $700 billion boosting manufacturing and research and development.

— Establish a commission to study expanding the Supreme Court.