A court in Thailand on Tuesday sentenced a former civil servant to a record prison term of 43 years and six months for breaching the country's strict law on insulting or defaming the monarchy, lawyers said.

The Bangkok Criminal Court found the woman guilty on 29 counts of violating the country’s lese majeste law for posting audio clips to Facebook and YouTube with comments deemed critical of the monarchy, the group Thai Lawyers for Human Rights said.

The sentence, which comes amid an ongoing protest movement that has seen unprecedented public criticism of the monarchy, was swiftly condemned by rights groups. 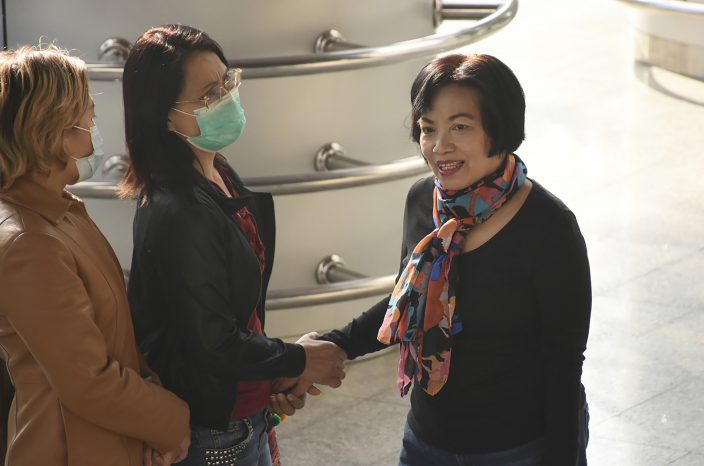 A woman identified only by her first name Anchan, right, shake hand with a friend as she arrives at the Bangkok Criminal Court in Bangkok, Thailand, Tuesday, Jan. 19, 2021. A court in Thailand on Tuesday sentenced a retired civil servant to a record 43.5 years in prison for insulting the monarchy by posting audio clips online of comments critical of the royal institution. (AP Photo)

“Today’s court verdict is shocking and sends a spine-chilling signal that not only criticisms of the monarchy won’t be tolerated, but they will also be severely punished,” said Sunai Phasuk, a senior researcher for the group Human Rights Watch.

Violating Thailand's lese majeste law — known widely as Article 112 — is punishable by three to 15 years’ imprisonment per count. The law is controversial not only because it has been used to punish things as simple as liking a post on Facebook but also because anyone — not just royals or authorities — can lodge a complaint that can tie the person accused up in legal proceedings for years.

During Thailand's last 15 years of political unrest, the law has frequently been as a political weapon as well as in personal vendettas. Actual public criticism of the monarchy, however, had until recently been extremely rare.

That changed during the past year, when young protesters calling for democratic reforms also issued calls for the reform of the monarchy, which has long been regarded as an almost sacred institution by many Thais. The protesters have said the institution is unaccountable and holds too much power in what is supposed to be a democratic constitutional monarchy.

Authorities at first let much of the commentary and criticism go without charge, but since November has arrested about 50 people and charged them with lese majeste.

“It can be seen that Thai authorities are using lese majeste prosecution as their last resort measure in response to the youth-led democracy uprising that seeks to curb the king’s powers and keep him within the bound of constitutional rule. Thailand’s political tensions will now go from bad to worse,” he said.

After King Maha Vajralongkorn took the throne in 2016 following his father's death, he informed the government that he did not wish to see the lese majeste law used. But as the protests grew last year, and the criticism of the monarchy got harsher, Prime Minister Prayuth Chan-ocha warned a line had been crossed and the law would be used.

The protest movement has lost steam since the arrests and a new restrictions on public gatherings that followed a surge in coronavirus cases.

Thai Lawyers for Human Rights identified the woman sentenced Tuesday only by her first name Anchan and said she was in her mid-sixties. The court initially announced her sentence as 87 years, but reduced it by half because she pleaded guilty to the offenses.

Her case dates back six years, when anti-establishment sentiment was growing after a 2014 military coup led by Prayuth. She was held in jail from January 2015 to November 2018.

She denied the charges when her case was first heard in military court, where lese majeste offenses were prosecuted for a period after the coup. When her case was transferred to criminal court, she pleaded guilty with the hope that the court would have sympathy for her actions, because she had only shared the audio, not posted or commented on it, she told local media Tuesday on her arrival at court.

“I thought it was nothing. There were so many people who shared this content and listened to it. The guy (who made the content) had done it for so many years," Anchan said. “So I didn’t really think this through and was too confident and not being careful enough to realize at the time that it wasn’t appropriate.”

She said she had worked as a civil servant for 40 years and was arrested one year before retirement, and with a conviction would lose her pension.

What is believed to have previously been the longest lese majeste sentence was issued in 2017, when a military court sentenced a man to 35 years in prison for social media posts deemed defamatory to the monarchy. The man, a salesman, had initially been sentenced to 70 years, but had his sentence halved after pleading guilty.