Containing the coronavirus outbreak and repairing the economic damage it has inflicted are the top priorities for Americans as Joe Biden prepares to become the 46th president of the United States, according to a new poll from The Associated Press-NORC Center for Public Affairs Research.

Overall, 53% of Americans name COVID-19 as one of the top five issues they want the government to tackle this year, and 68% mention in some way the economy, which is still reeling from the outbreak. In an open-ended question, those priorities far outpace others, like foreign affairs, immigration, climate change or racial inequality. The findings suggest Biden’s political fate is riding on his administration’s response to the pandemic.

“I just want to be through it,” said Kennard Taylor, a 20-year-old Detroit college student who had to move back home when the pandemic shuttered his campus and who lost his grandfather to the disease. “There are other things, but I'd say right now this is the priority for me.” 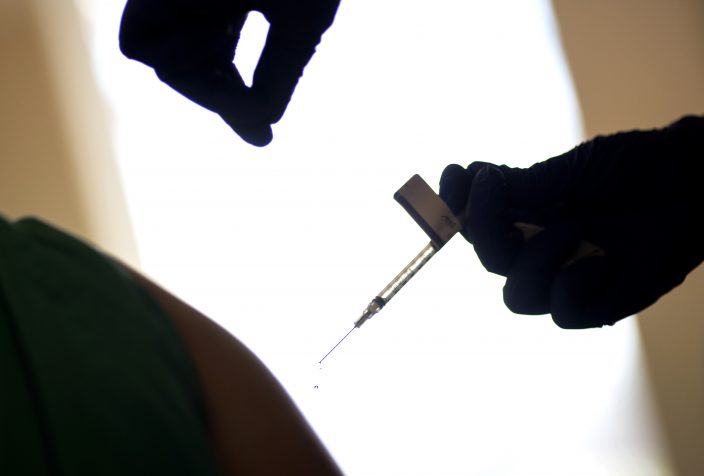 FILE - In this Dec. 15, 2020, file photo, a droplet falls from a syringe after a health care worker was injected with the Pfizer-BioNTech COVID-19 vaccine at Women & Infants Hospital in Providence, R.I. Uncertainty over the pace of federal COVID-19 vaccine allotments triggered anger and confusion Friday, Jan. 15, 2021, in some states where officials worried that expected shipments would not be forthcoming. (AP PhotoDavid Goldman, File)

The Democratic president-elect last week unveiled a proposed $1.9 trillion coronavirus relief package and has vowed to provide 100 million vaccination shots in his first 100 days, an ambitious goal that his health team is already scrambling to meet.

The poll was taken in December, before a pro-Trump mob stormed the U.S. Capitol seeking to halt the certification of Biden's election on Jan. 6, leading the U.S. House to impeach President Donald Trump for a second time. It also pre-dates the record number of coronavirus deaths this month, which has seen more than 4,000 die of the disease in several 24-hour periods, and a slow and bumpy start to vaccine distribution.

In a reflection of the series of national traumas from last year, another issue moved sharply up Americans' priority list for 2021 — racial inequality. After a year in which the country was convulsed by the May killing of George Floyd by a white Minneapolis police officer and the ensuing Black Lives Matters demonstrations, 24% cited race relations as a priority. In contrast, only 10% cited it in late 2019 as a priority for 2020. 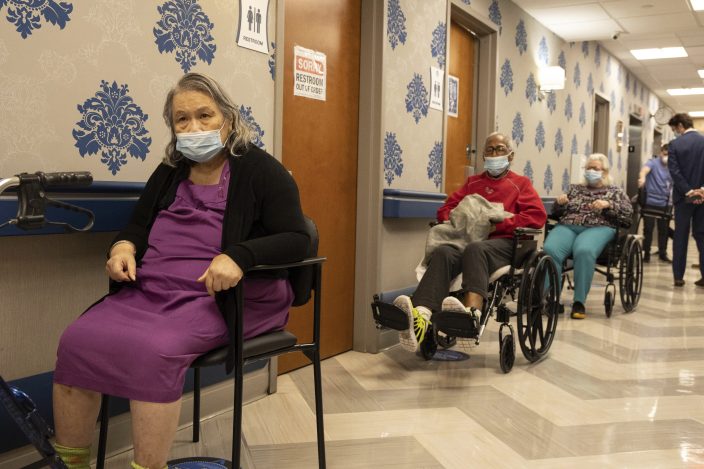 Nursing home residents make a line for the coronavirus disease (COVID-19) vaccine at Harlem Center for Nursing and Rehabilitation, a nursing home facility, on Friday, Jan. 15, 2021 in Harlem neighborhood of New York. Uncertainty over the pace of federal COVID-19 vaccine allotments triggered anger and confusion Friday, Jan. 15, 2021, in some states where officials worried that expected shipments would not be forthcoming. (AP PhotoYuki Iwamura)

Forty-three percent of Black Americans mention racism and racial inequality as a priority for 2021, compared with 22% of white Americans and 21% of Hispanics.

Still, even that issue takes a backseat to COVID-19 among some. “There's no point reforming police and racism if we're all dead,” said Aaron Williams, a 34-year-old African-American construction worker in Rosenberg, Texas.

“Nothing is going to pick up or change unless we get rid of the virus first,” said Williams, who lost his job last year after the virus reached the country and has been making do with temporary work. 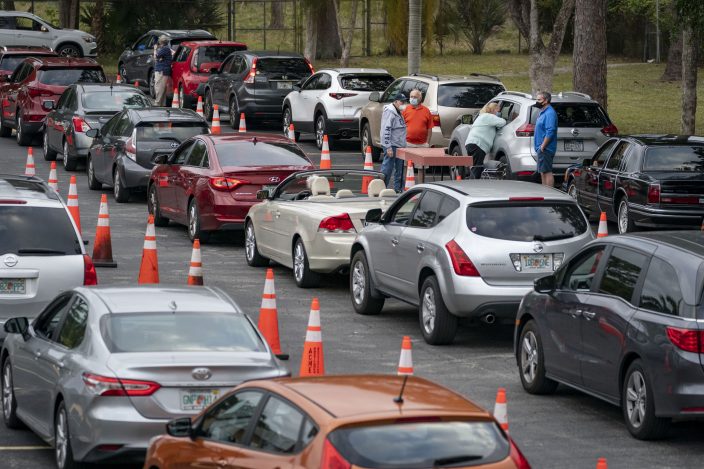 FILE - In this Jan. 11, 2021, file photo, Century Village residents wait before appointments are handed out for the COVID-19 vaccine in West Palm Beach, Fla. Uncertainty over the pace of federal COVID-19 vaccine allotments triggered anger and confusion Friday, Jan. 15, 2021, in some states where officials worried that expected shipments would not be forthcoming. (Greg LovettThe Palm Beach Post via AP, File)

Democrats like Williams were more likely to cite the coronavirus as an issue than Republicans like Clinton Adams, a school custodian in Florida. Even so, the impact of the virus dominates Adams' top issue: the economy.

“People need to get back to work,” said Adams, 39, who hopes the vaccine will push governors who've shut down some businesses to ease restrictions. “They just need to open it up.”

The economy was named in some way by 68% of Americans, an uptick from 59% who named it a top problem the year before. And more specifically mentioned unemployment and jobs as a focus for 2021 than said so for 2020, 26% vs. 15%. 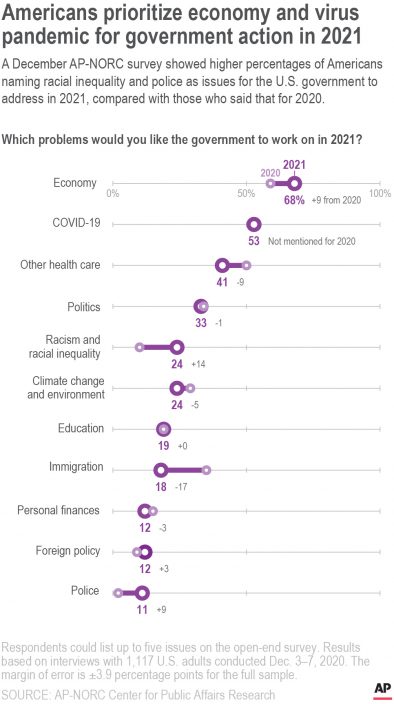 A December AP-NORC survey showed higher percentages of Americans naming racial inequality and police as issues for the U.S. government to address in 2021, compared with those who said that for 2020.

The poll also finds about 4 in 10 Americans mention health care separate from COVID-19. About a third mentioned foreign policy issues, and roughly as many named politics as a top problem to address this year.

A new priority is voting laws, with 14% of Republicans naming them as an issue after months of Trump falsely claiming that voter fraud led to Biden's victory in the election. Only 1% of Republicans cited the issue as a priority for 2020.

There was no widespread fraud in the November election. This has been confirmed by election officials across the country, as well as by Trump's former Attorney General William Barr. And nearly all of the legal challenges put forth by Trump and his allies were dismissed by judges.

Immigration, the issue that helped put Trump in the White House in 2016, dropped from 35% last year among all Americans to 18% now. It remains a higher priority for Republicans, with 24% mentioning immigration, though that is down from 51% one year ago.

Michael Henry, an actuary in Lawrenceville, Georgia, and chair of the local Young Democrats group, wants an overhaul of the immigration system to happen, especially after watching the grandfather of a friend die before he could get his citizenship, for which he'd already been waiting 30 years.

But, like many, Henry knows what has to happen first — the taming of the virus. “I swing between optimism and pessimism” on issues like immigration that require congressional action, Henry said. But he's optimistic the Biden administration can contain the virus.

“There's a lot that can be done by competent bureaucrats in the federal government,” Henry said.

“Am I hopeful? No,” said Joseph Williams, a 49-year-old Catholic school teacher and Republican in Clayton, New Jersey. “All you have to do is turn on the news and they're bickering all the time about who's racist and who's not racist. It's disappointing.”

Still, Williams is trying to find hope where he can. “I have hope that we, as Americans, can get out of this,” he said.

Adam Hoffman, a 39-year-old university English instructor in Phoenix, is a Democrat, and he expresses similar sentiments. He is trying to hold onto hope for the new year. “I'm optimistic enough to wake up in the morning,” Hoffman said. “What other option do we have? We've got to keep going.”

Helping his optimism: Hoffman is scheduled to get his first coronavirus vaccination shot on Wednesday, the day of Biden's inauguration.

The AP-NORC poll of 1,117 adults was conducted Dec. 3-7 using a sample drawn from NORC’s probability-based AmeriSpeak Panel, which is designed to be representative of the U.S. population. The margin of sampling error for all respondents is plus or minus 3.9 percentage points.