Indiana State hasn’t had anyone drafted in nearly a quarter-century.

However, two of its former players are a game away from the Super Bowl.

Both happen to play the same position on the same team.

Green Bay Packers tight end Robert Tonyan emerged as one of the league’s breakthrough performers this season. Dominique Dafney was working at a rooftop patio bar earlier this fall before catching on with the Packers and scoring a touchdown in their regular-season finale. 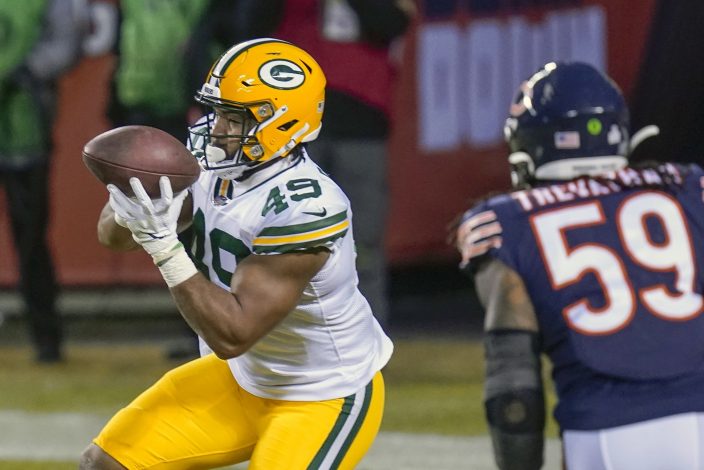 FILE - Green Bay Packers' Dominique Dafney catches a touchdown pass during the first half of an NFL football game against the Chicago Bears in Chicago, in this Sunday, Jan. 3, 2021, file photo. Indiana State hasn’t had anyone drafted in nearly a quarter-century but has two of its former players a game away from the Super Bowl. Both happen to play the same position on the same team. Green Bay Packers tight end Robert Tonyan emerged as one of the league’s breakthrough performers this year. Dominique Dafney went from working at a rooftop patio bar earlier this fall to catching a touchdown pass in the Packers’ regular-season finale.(AP PhotoCharles Rex Arbogast, File)

The two former Sycamores are trying to help the Packers (14-3) earn their first Super Bowl berth in a decade. Green Bay hosts the Tampa Bay Buccaneers (13-5) in the NFC championship game.

“I don’t get to see a lot of Indiana State people in the NFL,” Tonyan said. “It’s not like a ’Bama or a Clemson where you’re seeing all these guys come in. So to come from where I came from, I know the grind. I know the struggle, so I just welcomed him with open arms.”

Both players were undrafted free agents. The most recent draft pick from Indiana State was linebacker Dan Brandenburg, who went to the Buffalo Bills in the seventh round in 1996.

“You have a lot of Sycamores that are Packer fans right now,” Indiana State coach Curt Mallory said.

Tonyan played at Indiana State from 2013-16. He started out as a quarterback, but moved to receiver and set a school record with 20 career touchdown catches. Mike Sanford coached Tonyan at Indiana State and believed his star wideout had the body type to develop into an effective NFL tight end.

A core injury bothered Tonyan in 2019 and caused him to miss five games. He bounced back this season by catching 52 passes for 586 yards and 11 touchdowns during the regular season. He tied Paul Coffman’s 37-year-old franchise single-season record for touchdown catches by a Packers tight end.

Tonyan said he relied on the “worker’s mentality” he learned while growing up and seeing his family’s construction business.

“That’s something that came from my dad and my grandpa,” Tonyan said. “You wake up every morning, you put on your hard hat, you pick up your lunch pail.”

Tonyan’s humility was evident from how he allowed his name to be mispronounced continually before the Packers finally announced the correct pronunciation in late October (it’s TUN-yin, not TAWN-yin).

“I had to earn my stripes first before I started bossing people around and telling people what to do, so kind of just made a name for myself,” Tonyan said earlier this season.

Dafney’s rise is even more remarkable.

After beginning his college career at Iowa Western Community College and transferring to Iowa, he finished up as a walk-on who played a variety of positions at Indiana State. He rushed for 244 yards and scored five touchdowns in his final college game.

Mallory mentioned Dafney’s versatility and special-teams ability to various NFL people to get their feedback.

“The advice that was given to me to give to Dom, and I kept reiterating it, was just stay in shape and be ready when your name is called,” Mallory said.

Dafney signed with Indianapolis as an undrafted free agent but was released. Dafney says he was working as a bouncer at a rooftop patio bar in Des Moines, Iowa, while staying in football shape.

He left his job in Des Moines after hearing from the Packers.

“I just texted in our group message, ‘Hey I’m leaving because the Packers called me,’" Dafney said. “And he was like, ‘Nope, I get it. You don’t have to come to work tonight.’ I was like, ‘Yeah, I probably shouldn’t.’ And then I was gone the next day.”

He joined the Packers’ practice squad on Oct. 12 and was signed to their 53-man roster on Dec. 12. He showcased his versatility by catching a touchdown pass and making the tackle on the ensuing kickoff when the Packers won 35-16 at Chicago to clinch the NFC’s top seed.

Although Tonyan and Dafney weren't teammates at Indiana State, each understands the long road the other had to take to get to the NFL from an FCS program. Now they’re helping each other out while trying to get the Packers to the Super Bowl.