Chris Kirk shot 65 four days in a row and it wasn't enough to win on the PGA Tour.

Joaquin Niemann can appreciate the feeling. The dynamic 22-year-old from Chile played both tournaments in Hawaii and was a combined 45-under par. He lost in a playoff at Kapalua and finished one shot behind in the Sony Open.

For those who are either put off or put to sleep by low scoring on the PGA Tour, relief is probably not on the way. 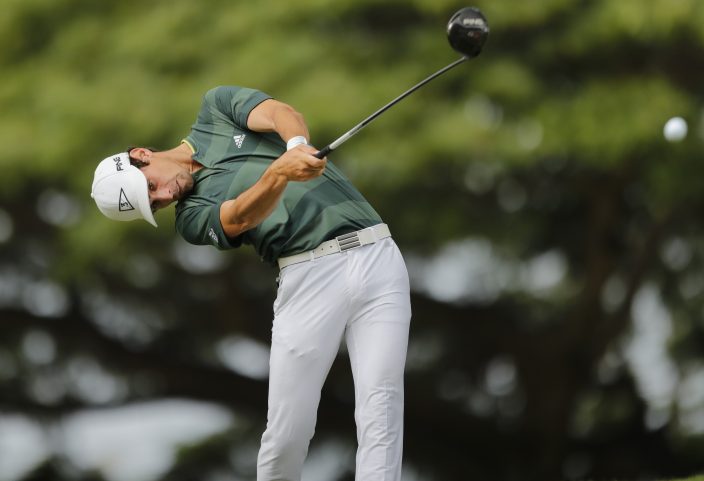 Joaquin Niemann, of Chile, hits from the second tee during the final round of the Sony Open golf tournament Sunday, Jan. 17, 2021, at Waialae Country Club in Honolulu. (Jamm AquinoHonolulu Star-Advertiser via AP)

Next up is The American Express in the California desert, a tournament still known as the Bob Hope in some circles and defined by low scoring under any name. Since going to 72 holes in 2012, the highest winning score was 20-under 268 by Hudson Swafford. He won by one shot in 2017 over Adam Hadwin, a day after Hadwin shot 59.

None of this should be cause for alarm. Some of it has to do with the weather.

The day after Kevin Na won the Sony Open by one shot over Kirk and Niemann, the wind blew so hard it felt as though the island of Oahu might get blown across the ocean. For the tournament week, there was barely enough wind to move a palm frond. A year ago, with 30 mph gusts every round until Sunday, the winning score was 10 shots higher. 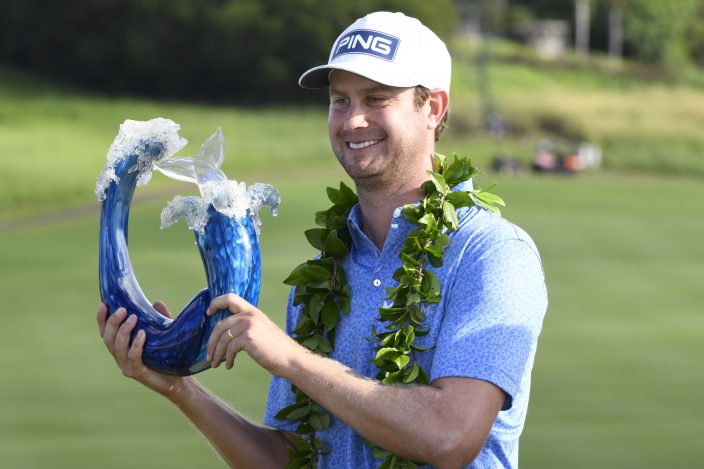 Harris English holds the champions trophy after the final round of the Tournament of Champions golf event, Sunday, Jan. 10, 2021, at Kapalua Plantation Course in Kapalua, Hawaii. (Matthew ThayerThe Maui News via AP)

There was only a tropical breeze, not the notorious trade wind, at Kapalua the previous week for the Sentry Tournament of Champions. Harris English and Niemann finished at 25-under par, and seven others finished at 20 under or better.

Golf has been that way for more than a century.

Instead of worrying how low the scores are getting, perhaps it's worth celebrating which records have stood the longest. 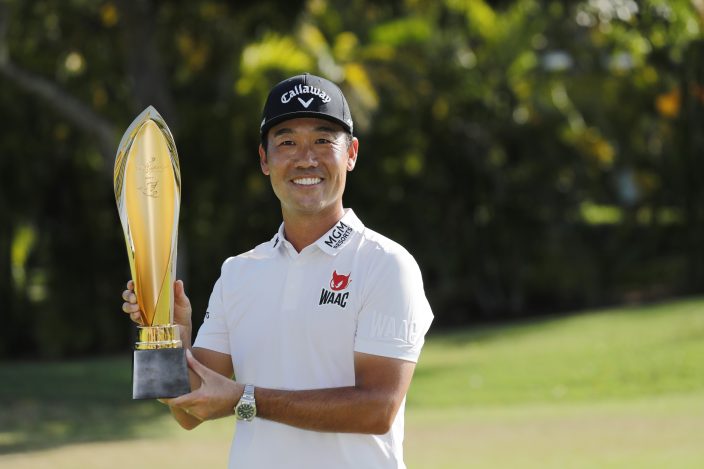 All of them probably deserve an asterisk because golf courses only look the same. They have become longer by various measures. Lawn mowers are better, too. Nothing is ever exactly how it was.

The oldest 72-hole record on PGA Tour courses remains at Riviera in 1985, when Lanny Wadkins shot 20-under 264 on a soggy course in Los Angeles. Wadkins is proud of that mark, and he surely is happy Dustin Johnson wasn't aware of the record — nor did he particularly care — when Johnson reached 20 under with 12 holes remaining in 2017, played it safe and shot 17-under 267 to win by five.

Right behind is Bay Hill, the course where Tiger Woods has won a record eight times. He still hasn't had a week like the late Payne Stewart did in 1987 when he shot 264. No one has come within five shots of Stewart's record.

Tom Lehman shot 268 at Muirfield Village to win the Memorial in 1994. Greg Norman, Woods and Patrick Cantlay all have come within a stroke of that record.

And yes, Woods still has a few scoring records to claim. One of them is at East Lake, where he shot 23-under 257 in 2007. Not even Johnson with a 10-shot head start in the new FedEx Cup scoring system could top that.

Those records surely will fall in time. That's how golf has evolved, much like other sports.

Sprinters have better shoes. Swimmers have better suits. That doesn't even account for players who are bigger, stronger and faster, and equipped with better training, more knowledge and video, perhaps the most underrated piece of technology.

Matt Kuchar spoke to this a year few years ago when he said, “It is what we should expect.”

“Guys in any sport, any activity, have figured out how to get better with all the extra work and study and whatever else,” Kuchar said. “We see it everywhere, whether it's the track or the pool, the golf course, hoops.”

Why should golf be any different?

Mike Davis would love to wrap up the “Distance Insights Project” before he leaves as the USGA's chief executive. The concern by the USGA and R&A is that a century's worth of distance gains is not good for the game, forcing courses to get bigger and use more water and other resources. That's primarily at the elite level, only a fraction of golf.

That doesn't — or shouldn't — have anything to do with scoring. Then again, the USGA has denied for years that it's trying to protect par at the U.S. Open and no one seems to buy it.

The best players will find a way because they always have.

Rory McIlroy once said the game is changing but not necessarily for the worse. Every generation gets better with more knowledge and science — and yes, technology — at its disposal.

“So if we're not better,” he concluded, “then we're doing a pretty bad job.”