That much-anticipated opening Thursday of March Madness will belong to the play-in teams, part of a scrambled and modestly condensed schedule for the 2021 tournament released Tuesday.

The coronavirus pandemic forced the NCAA to move the entire 67-game tournament to Indiana, which means the schedule doesn't have to be built with travel concerns in mind.

The so-called “First Four” — two games pitting the last four at-large teams in the field and another two featuring the lowest-rated conference champions — will take place on Thursday, March 18. 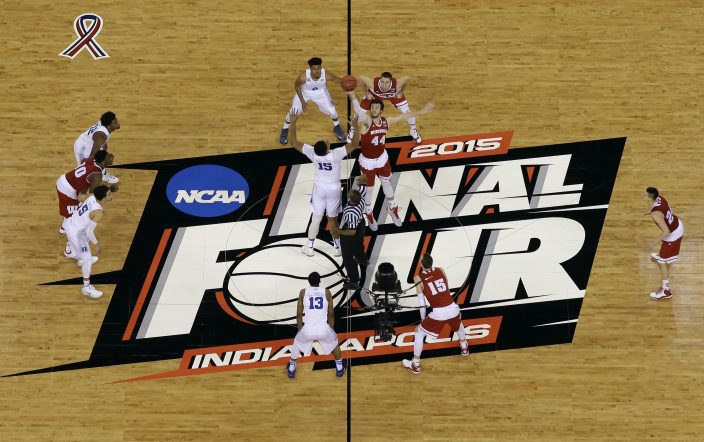 FILE -Duke's Jahlil Okafor (15) and Wisconsin's Frank Kaminsky (44) battle for the ball at the tip off during the first half of the NCAA Final Four college basketball tournament championship game in Indianapolis, in this Monday, April 6, 2015, file photo. The NCAA announced Monday, Jan. 4, 2021, that all 67 men's basketball tournament games including the Final Four will be played entirely in Indiana in a bid to keep the marquee event from being called off for a second consecutive year because of the coronavirus pandemic.(AP PhotoDavid J. Phillip, File)

That day typically would have marked the start of play in the main bracket. Instead, the first two full days of action are now scheduled for Friday and Saturday, March 19-20, with the round of 32 taking place Sunday and Monday, March 21-22.

The Sweet 16 will run Saturday and Sunday, March 27-28, with none of the games scheduled to overlap, as they often do when they take place on the second Thursday and Friday nights of the tournament. Those winners will face off in the Elite Eight on the following Monday and Tuesday evenings.

The Final Four is still scheduled for Saturday April 3 and Monday April 5. 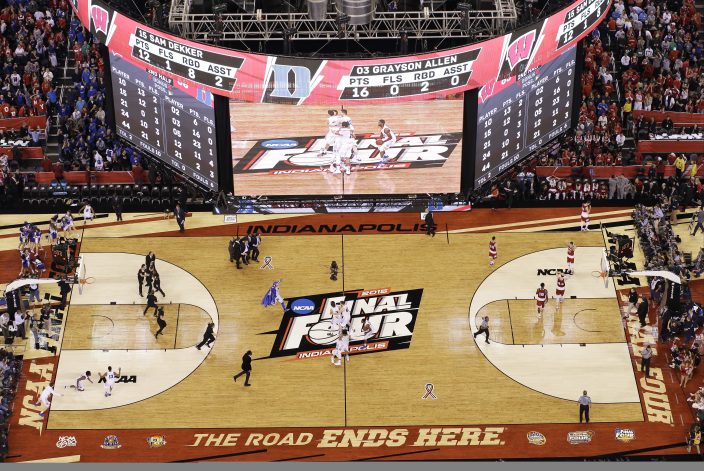 FILE - In this Monday, April 6, 2015, file photo, Duke players celebrate on the court after their 68-63 victory over Wisconsin in the NCAA Final Four college basketball tournament championship game in Indianapolis. The NCAA announced Monday, Jan. 4, 2020, that this year's 67 men's basketball tournament games including the Final Four will be played entirely in Indiana.(AP PhotoDavid J. Phillip, File)

All action moves to Lucas Oil Stadium starting with the Elite Eight.

Students, teachers and relatives a ...