Far from deterred by a lengthy layoff after getting her left knee scoped, Carli Lloyd is back with a steadfast resolve as the United States pushes toward the Tokyo Olympics.

Lloyd's recovery work was on display Monday night in Florida when she played the full 90 minutes in the team's 4-0 victory over Colombia.

Not bad for a veteran player who is 38 and hadn't played since last March. 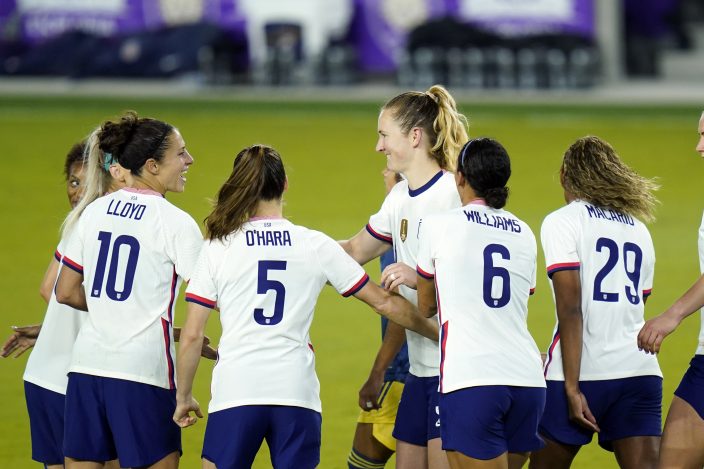 “I'm pretty happy with where I'm at physically, after an injury,” she said. “You know, having somewhat of a minor scope, I guess as people say, isn't really minor. So it took me a ways to get back and rebuild myself again.”

Lloyd last played in the 2020 SheBelieves Cup. She did not play for her National Women's Soccer League team, Sky Blue, in last summer's Challenge Cup tournament or the league's fall series. She also missed the national team's final camp of 2020 and a match against the Netherlands.

"She’s coming off a knee scope and playing 90 minutes. I think that’s incredible,” coach Vlatko Andonovski said. “She did a great job, assisted on two goals, helped us win the ball back, played for 90 minutes in high tempo. I think it was just a good example for some of the younger players in terms of what it takes to be on the next level.”

Lloyd is probably best known for her hat trick in the U.S. victory over Japan to win the 2015 World Cup in Canada. She had a more limited role when the United States won the 2019 World Cup in France, but she still finished the year with 16 goals to lead the team.

Lloyd also got attention for kicking a 55-yard field goal when she visited a Philadelphia Eagles' practice, leading to speculation, some serious and some not, about a possible shot at the NFL once she retires from the national team.

But even during her recovery, Lloyd did not consider hanging up her soccer cleats.

“It wasn't a question of not returning,” she said. “You know this was the longest hiatus and longest break mentally that I think I've ever had in my career. I've been fortunate enough with injuries, I've broken a lot of bones (but) this was my first surgery. I thought I'd make it throughout my career without surgery. I was pretty close."

If Lloyd makes the 18-player squad for Tokyo, it will be her fourth Olympics. At the Beijing Games, she scored in overtime for a 1-0 victory against Brazil in the final. Four years later, she scored both goals in the gold-medal match against Japan at Wembley Stadium, becoming the only player to score winning goals in consecutive Olympic finals.

While she was recovering from the knee injury with her husband, Lloyd reconnected with her family after years of estrangement. She also cut ties with her long-time coach, James Galanis.

“I think it’s been pretty cool that things have come full circle for me. My family was at the start of my career and now they’re getting to be part of it at the end,” she said.

Lloyd drew heat on social media Monday, the Martin Luther King Jr. holiday, when she and several U.S. teammates did not kneel for the national anthem. The team wore warmups that proclaimed Black Lives Matter.

“I think the beauty of this team is that we stand behind each other no matter what,” she said. “Players decided to kneel, some players decided to stand, and at the end of the day we have each others' backs. I think ultimately we're all here to support one another in any way that we can, and that's what's amazing about this team.”

The United States will play Colombia again Friday to conclude its January training camp. The next event on the team's schedule is the SheBelieves Cup in February. The already-delayed Olympic Games in Tokyo are looming, if the event is held.

Lloyd has said in the past that she intends to retire following the Olympics. For now, the only thing missing for her is the goals. She had chances Monday but couldn't find the back of the net.

“But I've also got to focus on where I am right now and where I want to be, and just keep plugging along,” she said. “I think it (scoring) is going to come, I just need to be patient. I can't beat myself up about it. But there's other roles for me to play besides scoring goals.”