Leicester moved to the top of the Premier League at the midway point of its campaign after a dominant 2-0 victory over Chelsea on Tuesday.

Wilfred Ndidi and James Maddison scored in the first half to lift Leicester above Manchester United and Manchester City into first place.

Leicester manager Brendan Rodgers has been happy for his players to go under the radar in the title race, but his bright and energetic team continues to show its credentials and is now unbeaten in six league games. 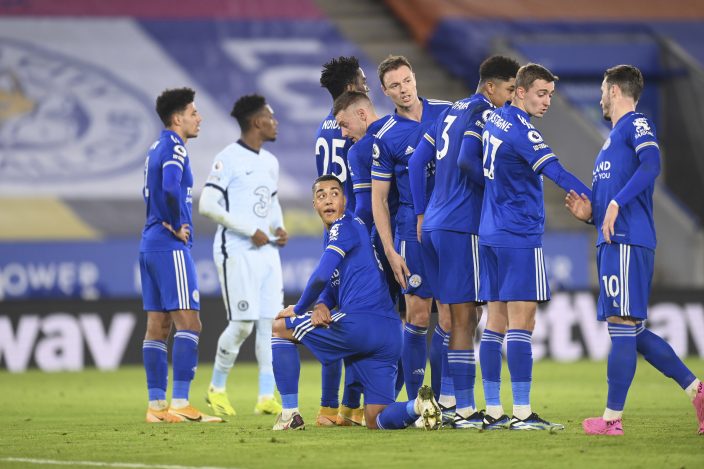 Leicester players prepare a wall for a free-kick during the English Premier League soccer match between Leicester City and Chelsea at the King Power Stadium in Leicester, England, Tuesday, Jan. 19, 2021.(Michael ReganPool via AP)

Even with Jamie Vardy's goal drought extending to five games, Leicester had enough quality to beat a Chelsea side that has now lost five of its last eight league games to pile the pressure on manager Frank Lampard. Chelsea, which spent nearly $300 million on new players ahead of the season, dropped to eighth place.

Ndidi had put Leicester ahead with a shot from the edge of the area that flew in off the post, after Harvey Barnes missed his kick following a short-corner routine in the sixth minute involving Marc Albrighton and Maddison.

Knowing victory would take them back to the top for the first time since November, the Foxes continued to push and Maddison clipped the bar 10 minutes later after Timothy Castagne’s bustling run.

Leicester goalkeeper Kasper Schmeichel had to turn Reece James’ driven effort over after 20 minutes but the visitors’ flaws had been exposed early.

There was little suggestion they would recover, even if Callum Hudson-Odoi hit the side netting from a promising position.

By then, Chelsea goalkeeper Edouard Mendy had already turned Albrighton’s speculative effort over, while Barnes and Vardy remained constant dangers.

Vardy continues to nurse a long-standing hip problem but demonstrated his threat when he burst down the right and Mendy saved his attempted lob.

Chelsea thought it had a lifeline six minutes before the break when Craig Pawson pointed to the spot after Evans tripped Pulisic.

Yet a VAR review correctly ruled the foul was just outside the area — Pulisic’s momentum carrying him in — and Mason Mount blazed the free kick over.

It proved crucial as the Foxes immediately doubled their lead. From Schmeichel’s goal kick, the ball eventually fell for Albrighton and his clever lofted pass went over Vardy and into the path of Maddison.

The midfielder had been left unmarked and comfortably beat Mendy for his eighth goal of the season.

The unmarked James Justin should have made it 3-0 four minutes after the break but headed Albrighton’s deep cross just wide at the far post.

Albrighton was also denied a goal by the offside flag and Mendy saved from Youri Tielemans. But despite failing to grab a third, Leicester's victory was never in danger.

Chelsea substitute Timo Werner, without a goal in the Premier League since October, did have the ball in the net when he turned in Hakim Ziyech’s free kick with four minutes left but he was ruled offside.