No disrespect to Tom Brady, but young Tampa Bay linebacker Devin White wants the Buccaneers defense on the field with the game on the line.

That’s how much confidence the second-year pro has in himself and a band of ball-hawking teammates who’ve helped the Bucs (13-5) reach Sunday’s NFC championship game against Aaron Rodgers and the Green Bay Packers.

No player in NFL history has more playoff wins or Super Bowl rings than the 43-year-old Brady, who’s preparing for his 14th conference title game — first in the NFC — after White and “my guys” forced four turnovers to shut down Drew Brees and the New Orleans Saints in last week’s divisional round. 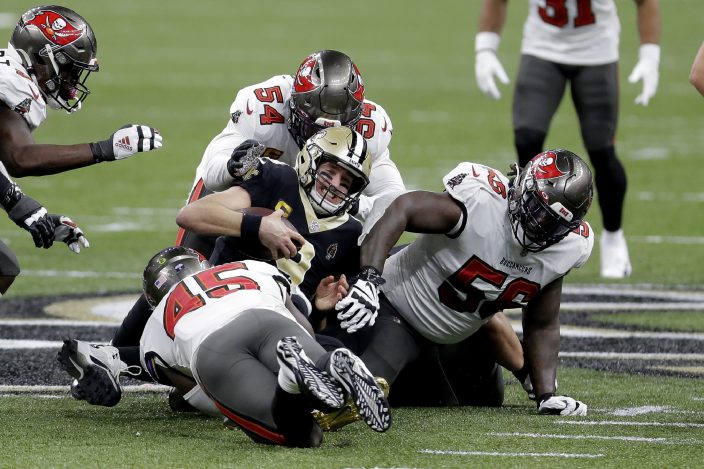 White, returning from sitting out the regular-season finale and Tampa Bay’s wild-card win over Washington after testing positive for the coronavirus, tied a franchise record with 11 tackles in his playoff debut.

He also scooped up a fumble and had an interception, setting up a pair of touchdowns that ensured the Bucs wouldn’t need any late heroics from Brady.

“Everything that happened in the game was just me playing in the system, all of us playing together, all of us being on the same page, all of us believing in one another,” the fifth overall pick in the 2019 draft said. “Everything we did together. There’s no individual credit.”

Cornerback Sean Murphy-Bunting had one of Tampa Bay’s three interceptions of Brees. He tipped his to his draft classmate anyway.

To beat Green Bay (14-3) at Lambeau Field and advance to the Super Bowl, it’ll take another superb performance from a defense that until last Sunday frankly had not played a dominant game since it sacked Rodgers four times and intercepted him twice in a 38-10 rout of the Packers in Week 6.

“Everybody was saying: ‘Where’s the Tampa Bay defense from the Green Bay game?’ We were really feisty with them, we were really challenging them at the line of scrimmage and we were really getting after the quarterback,” White said. “I think we had that same mentality (against New Orleans).”

The 22-year-old linebacker raised some eyebrows in Green Bay after the October meeting when — in explaining how Tampa Bay recovered from a slow start to dominate after trailing 10-0 early — White said “we knew those guys didn’t deserve to be on the same field with us because we’ve got too much talent.”

“We’re talking about the NFC championship game with an opportunity to go to the Super Bowl. I think that’s enough motivation right there,” LeFleur said before shifting gears.

“You know, hey, he was right. They whipped us. There’s no sense in talking about it. The only thing you can do is you’ve got to prepare the best you can and then go prove it” the Green Bay coach added. “He’s entitled to say what he wants to say, but we ultimately got to be the ones to rally around, make sure we have a great week of preparation and go out there and put our best stuff out on the field.”

That’s what White intends to do, too.

The Bucs led the NFL in rushing defense for the second straight season, but have been vulnerable against the pass with a young secondary that’s battled injuries and growing pains.

White said it’s important to build off last week, when takeaways set Brady up for touchdown drives of 3, 40 and 20 yards.

“The job’s still not finished. It was not all about just beating the Saints, it was always about getting to a bigger goal,” the linebacker said. “Tom preached that, and Tom’s a winner. I’m glad to be playing under his leadership.”

Before heading to New Orleans, which had beaten Tampa Bay twice during the regular season by a combined score of 72-26, coach Bruce Arians told anyone who would listen that the Bucs were a much better team than the one that lost to the Saints 38-3 in Week 9.

That loss began a stretch in which the Bucs dropped three of four. They’ll take a six-game winning streak to Lambeau Field.

“We had to look ourselves in the mirror. We had to challenge ourselves on who we wanted to be. Everybody always asked what was our identity. We didn’t have an answer,” White said.

“But coach B.A. had an answer. He said we’re some (expletive) who are going to find a way to win the game. That was the best thing I ever heard. ... When he said that, it kind of clicked,” White added. “In this league, the only thing that matters is winning. With him saying that, I think that did it for everybody.”