Against all odds, interim captain Ajinkya Rahane managed to lead an injury-affected India to victory in the fourth cricket test and retain the Border-Gavaskar Trophy.

India was forced to make four changes for the series finale after salvaging a draw in Sydney, and a draw in Brisbane would have been good enough to retain the trophy.

Turns out Rahane had a plan for victory all along. 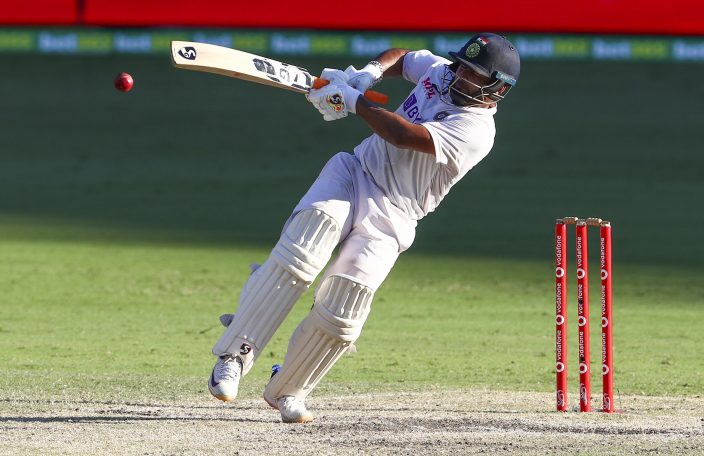 India's Rishabh Pant falls as he hits the ball for four runs during play on the final day of the fourth cricket test between India and Australia at the Gabba, Brisbane, Australia, Tuesday, Jan. 19, 2021. (AP PhotoTertius Pickard)

“We knew if we wanted to win the test and series then five bowlers would be the key,” Rahane said after India’s three-wicket win on Tuesday.

“That’s why we opted for five bowlers. Washington Sundar got that balance for us. Mohammed Siraj had played two test matches, (Navdeep) Saini one, (Shardul) Thakur one, Natarajan also on debut. All credit to them.”

India’s bowling attack was decimated by the loss of Jasprit Bumrah and Ravichandran Ashwin, who could easily have been chosen as man of the series ahead of Pat Cummins if he played the final test. 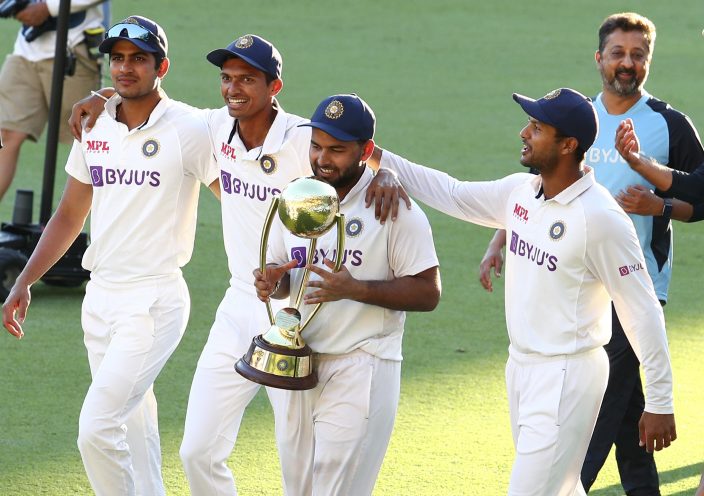 India's Rishabh Pant carries the trophy as he celebrates with his teammates after defeating Australia by three wickets on the final day of the fourth cricket test at the Gabba, Brisbane, Australia, Tuesday, Jan. 19, 2021.India won the four test series 2-1. (AP PhotoTertius Pickard)

But debutants Sundar and Thangarasu Natarajan played key roles at the Gabba, while recalled paceman Thakur starred with bat and ball, top-scoring for India in the first innings with 67 runs and taking seven match wickets.

Rahane also praised Rishabh Pant’s match-winning total of 89 not out. Pant’s promotion to No. 5 in the order was a clear signal of India’s intention to complete a venue-record chase of 328, rather than bat for a draw.

“Rishabh was brilliant,” Rahane said. “I don’t know how to describe this victory. I’m just proud of all the boys, each and every individual showed character.”

A captain’s century from Rahane for an eight-wicket win at the Melbourne Cricket Ground, after the visitors lost by eight wickets in the day-night test at Adelaide, started the series comeback.

India lost regular captain Virat Kohli, who returned to India for the Jan. 11 birth of his daughter, and Mohammed Shami with a broken right arm, after being bowled out for 36 in Adelaide, India’s lowest ever total.

“After Adelaide, we didn’t discuss anything about what happened in Adelaide,” Rahane said. “We decided we would fight very hard, we just wanted to give our best and not think about the result. We just wanted to express ourselves as a team.”

Next up for India is a four-test home series against England beginning Feb. 5 in Chennai, when Kohli, who has been named in India’s squad for the series, will return to the captaincy.

Kohli took great pleasure in congratulating Rahane and the team from his home in India.

“WHAT A WIN!!! Yessssss,” Kohli tweeted. “To everyone who doubted us after Adelaide, stand up and take notice. Exemplary performance but the grit and determination was the standout for us the whole way. Well done to all the boys and the management. Enjoy this historic feat lads.“