Miles Wood had a goal and an assist, and Travis Zajac also scored to give New Jersey at least a point in each of its first three games (2-0-1).

Blackwood, starting for the third straight game, made seven saves in the first period and 20 each in the second and third — finishing five short of his career high set last season. 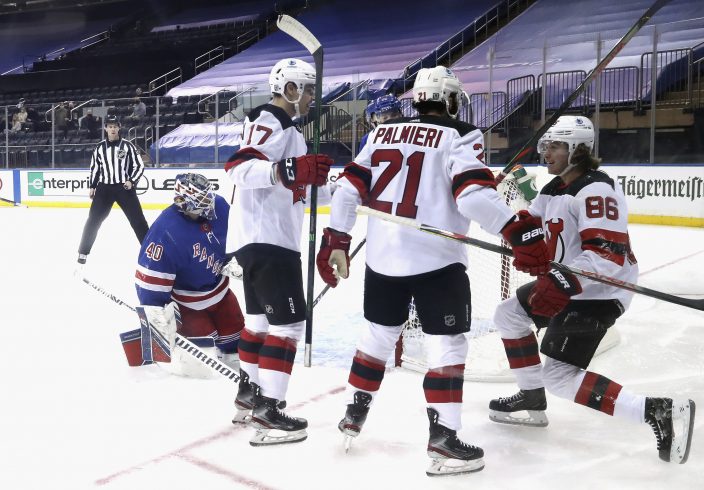 Chris Kreider and Mika Zibanejad scored on the power play, and Filip Chytil also had a goal for the Rangers. Artemi Panarin and Adam Fox each had two assists.

Alexandar Georgiev, starting a second consecutive game after shutting out the Islanders on Saturday night, gave up four goals on 20 shots through two periods. Igor Shesterkin came on to begin the third and finished with eight saves.

Chytil pulled the Rangers within one as he knocked in the rebound of an attempt by Phil Di Giuseppe at the 7-minute mark of the third period. It was the first even-strength goal allowed by the Devils this season. 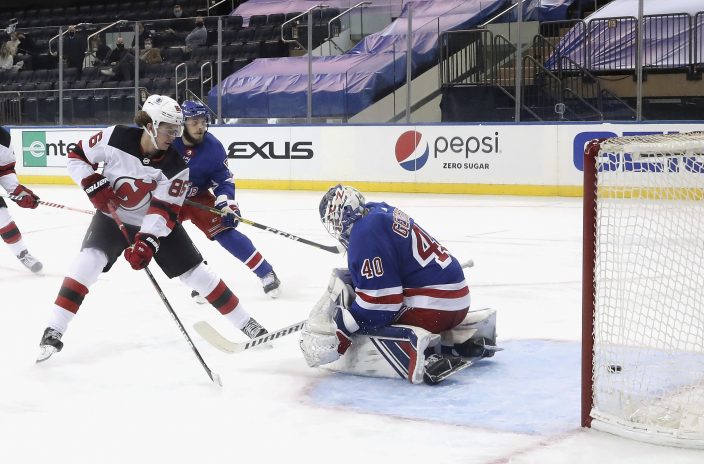 New York pulled Shesterkin on a power play with about 3 minutes left in the game for a two-man advantage, but couldn’t get the tying goal.

Trailing 1-0 after 20 minutes, the Rangers outshot the Devils 22-10 in the second — getting more shots on goal in the period than New Jersey had in the game (20) at that point. However, the Devils added to their lead.

The Rangers tied the score 1-all on a fortuitous deflection during a power play early in the second. Blackwood stopped Panarin’s initial shot before Kreider came in and attempted a backward pass. The puck deflected off Devils defenseman Ryan Murray’s skate and through Blackwood’s legs at 2:50. 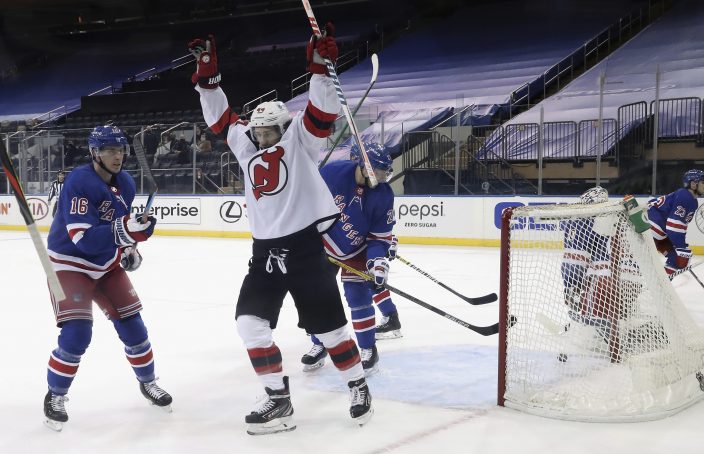 Hughes regained the lead for New Jersey less than 90 seconds later. Ty Smith’s shot was deflected up by Georgiev over the goalie and off the post. With the puck sitting in the crease in front of the goal line, Hughes swooped in and put it in before Georgiev could get back.

Kreider nearly tied it again on a power play, but his shot rang off the post at 7:19.

Hughes then pushed the Devils’ lead to 3-1 just 1:19 later on a breakaway as he skated in and put a backhand through Georgiev’s legs. 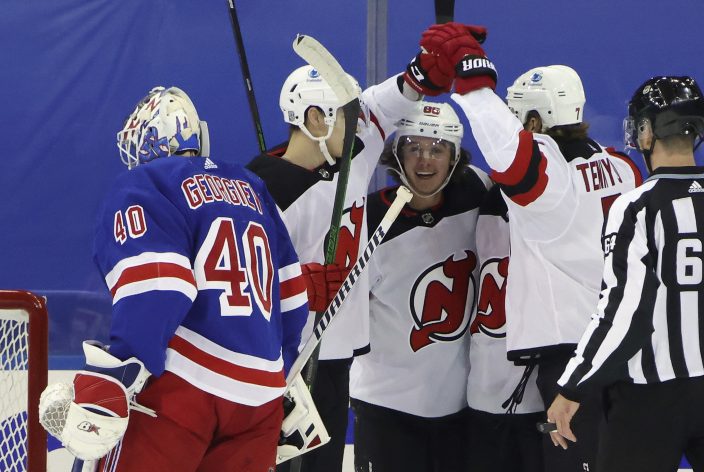 Zibanejad pulled the Rangers back within one on another power play, scoring on a one-timer from a sharp angle from the left side off a pass from Adam Fox with 7:51 left in the middle period.

Wood restored the Devils’ two-goal lead with 4 minutes left on their power play. Hughes sent a pass from the left side through traffic to the right doorstep, and the puck went off Wood’s stick and right skate and in. It was Wood’s third goal of the season and 100th career point.

P.K. Subban appeared to extend the Devils’ lead with 2:15 remaining in the period, but the goal was disallowed after the Rangers challenged for offside on the play. 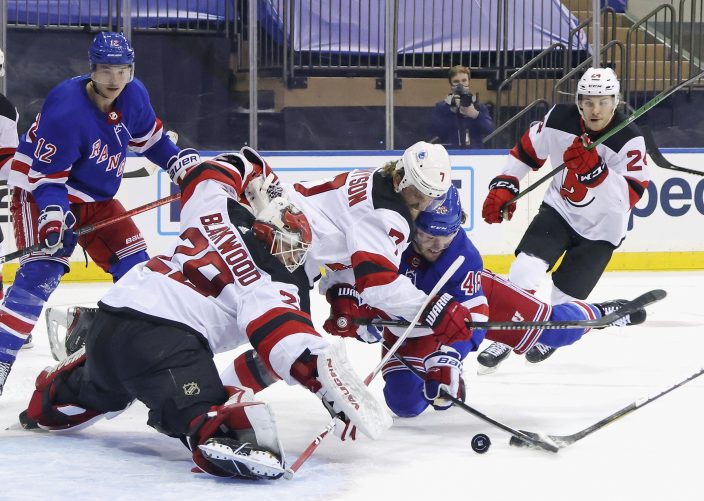 Zajac got the Devils on the scoreboard 32 seconds into the game. Wood got a long pass from Subban and brought the puck up the right side while the Rangers were making a line change. Wood fired a shot from the right circle that Georgiev stopped, but Zajac skated in and put the rebound past the goalie on the stick side for his first of the season.

Panarin, who scored twice in the Rangers' 5-0 win over the Islanders on Saturday night, had his second straight two-point game. The star left wing had a career-high 95 points in 69 games a year ago in his first season in New York. 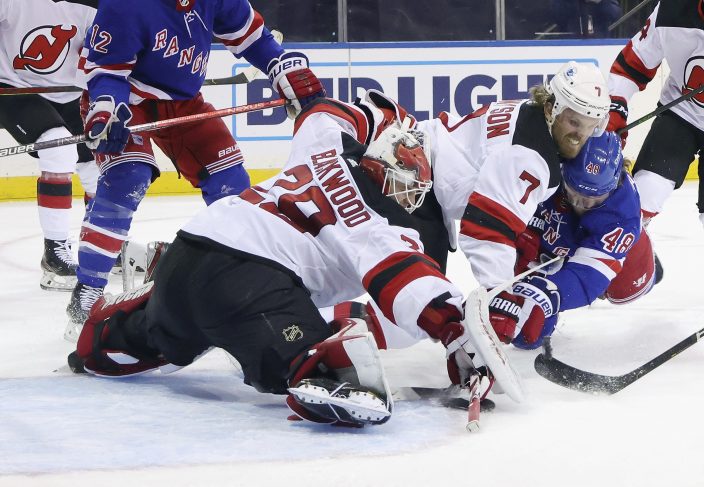 Zajac's goal was his 99th career point. It was also his 18th goal against the Rangers, tying him with Bobby Holik for third-most in franchise history against New York. Patrik Elias (23) tops the list, followed by John MacLean (21). 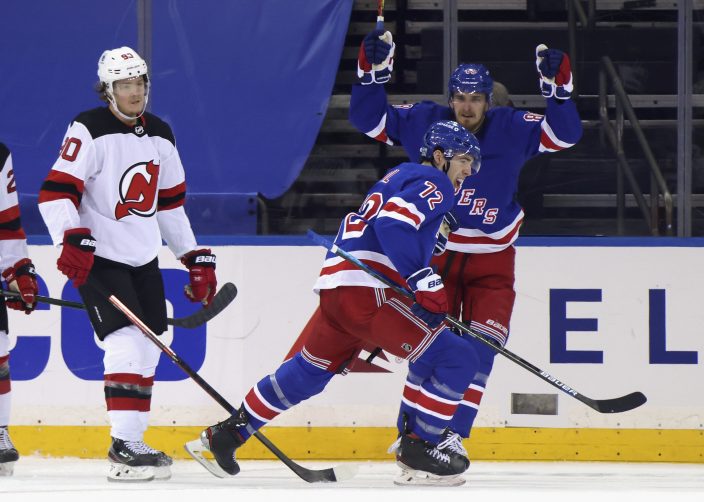 This was one of 10 games for the Rangers this season in which they are not playing the same opponent multiple times. For the Devils, this was one of nine times they don’t play the same team in back-to-back games.

However, the teams will play each other four straight games April 13-18 — April 13 at New Jersey, April 15 and 17 at Madison Square Garden, and April 18 back at Prudential Center.

Devils: At the New York Islanders on Thursday night before a three-game homestand.

Rangers: At the Pittsburgh Penguins on Friday night to open a two-game series and four-game road trip.