Nikola Jokic had 27 points and 12 rebounds before calling it an early night as the Denver Nuggets routed the Oklahoma City Thunder 119-101 on Tuesday.

Clean shaven and sporting a new buzz cut, Jokic also had six assists before taking a seat on the bench with the other starters for the fourth quarter.

Reserve Monte Morris added 15 points and Paul Millsap finished with 13 points and 12 rebounds. The Nuggets have won six straight over the Thunder at home. 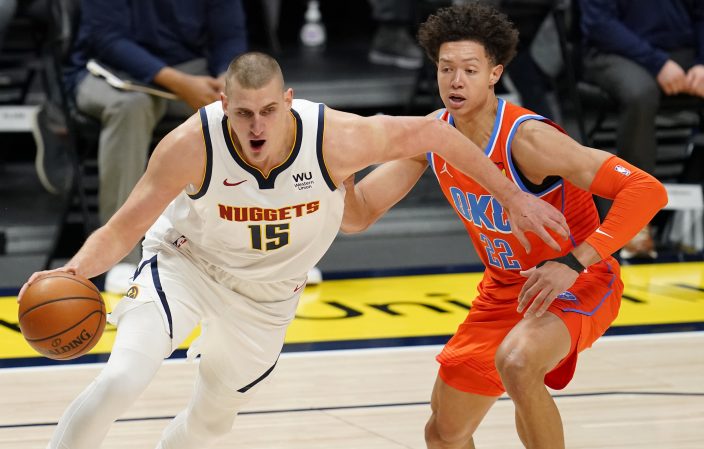 Luguentz Dort kept the Thunder close early by scoring 15 of his 20 points in the first half.

The Nuggets began to pull away in the second quarter and stretched it to 26 in the third before Jokic and his fellow starters became spectators.

It was a much-needed confidence boost for the struggling Nuggets (7-7), who advanced to the Western Conference finals inside the NBA bubble last season. So much so that former Nuggets coach George Karl posted on social media leading up to the game: "It's early in the season to say this but the Nuggets game against the Thunder is a ‘must win’ for Denver.” 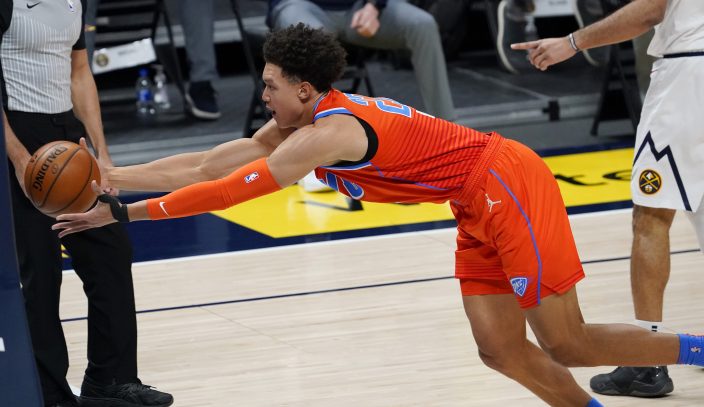 Oklahoma City Thunder forward Isaiah Roby reaches out to pull in a loose ball against the Denver Nuggets in the first half of an NBA basketball game Tuesday, Jan. 19, 2021, in Denver. (AP PhotoDavid Zalubowski)

Nuggets guard Facundo Campazzo had the highlight play of the first half, throwing a backward, between-the-legs pass to Morris for a layup.

The Thunder played for the first time since an OT win over Chicago last Friday. Their game against Philadelphia on Sunday was postponed because the 76ers did not have the league-required eight available players to proceed because of contact tracing.

Thunder: G Ty Jerome remains in Oklahoma City to rehab a sore ankle. ... The Thunder are 5-2 on the road this season and 1-5 at home. ... G Shai Gilgeous-Alexander had 14 points and seven assists.

Nuggets: F Greg Whittington had knee surgery Tuesday. He will be re-evaluated in four to six weeks. ... F Will Barton had 13 points and six assists. ... Denver outscored Oklahoma City in second-chance points 32-3.

Jokic leads the league in assists, but also ranks among the leaders in turnovers. Coach Michael Malone understands it comes with the territory.

“You look at the list, the guys who have turned the ball over are Nikola, LeBron (James), James Harden — players that are high quality and much is being asked of them,” Malone said.

Thunder center Al Horford missed the game after he and his wife recently welcomed a new daughter, Nova. Coach Mark Daigneault wasn’t sure of a timetable on his return.

Malone keeps feeding the confidence of Morris. For that approach, Malone credits the sage advice once given to him by his father, longtime NBA coach Brendan Malone.

“Some of the greatest advice he gave me as a young coach, the greatest gift I can give any of our players is confidence,” Malone said. “Monte knows he has my full confidence.”

Thunder: Face the Clippers in Los Angeles on Friday and again on Sunday.

Nuggets: Begin a five-game trip by playing in Phoenix on Friday and Saturday.