Aaron Rodgers, Patrick Mahomes and Josh Allen have something in common besides being three of the four starting quarterbacks remaining in the NFL playoffs.

The three were picked in the first round by teams coming off a playoff berth in moves that Green Bay, Kansas City and Buffalo surely don’t regret.

The Packers took Aaron Rodgers 24th overall in 2005 despite having Brett Favre on the roster. Favre had led Green Bay to a 10-win season and playoff berth in 2004 and remained starter for Rodgers’ first three seasons. The Packers then made Rodgers the starter in 2008 and have made the playoffs 10 times since then with one Super Bowl title. 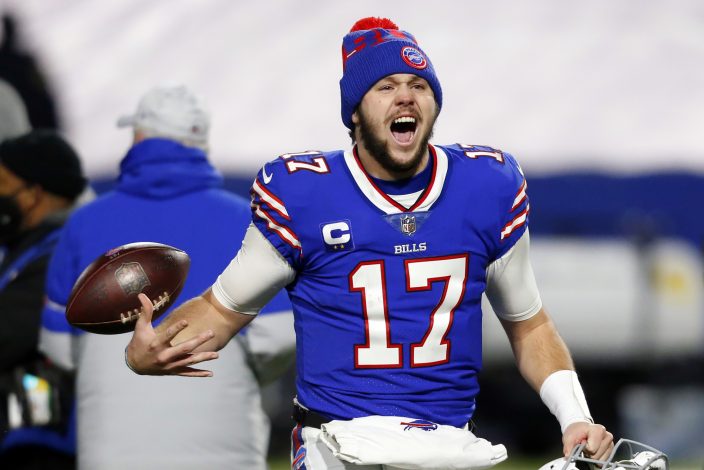 The Chiefs made their move for a quarterback in 2017 after back-to-back playoff appearances the previous two years with Alex Smith as starter. Kansas City traded up 17 spots to take Mahomes and gave him the starting role in 2018. All Mahomes has done in that time is win MVP in 2018, get named Super Bowl MVP last season and now has the Chiefs in position to get back there again this season.

The pick Kansas City got to take Mahomes came from Buffalo, who ended up with star cornerback Tre’Davious White that season along with extra first and third-rounders. The Bills then traded up five spots the next year to draft Allen, who has emerged as a star this season.

Since 2000, a playoff team has used a first-round pick on a quarterback seven times overall.

The Broncos did it twice, taking Jay Cutler in 2006 after making it to the AFC title game with Jake Plummer the previous season, and then Paxton Lynch in 2016 after winning the Super Bowl in Peyton Manning’s final season before retirement.

The Texans did it in 2017, trading up for Deshaun Watson after making it to the playoffs the previous year with Brock Osweiler, and the Packers did it this past season when they took Jordan Love.

TOM TERRIFIC: Tom Brady can join some illustrious company with a win this week for another Super Bowl appearance. Brady is appearing in his staggering 14th conference title game in 19 seasons as a starter when Tampa Bay visits Green Bay on Sunday.

Brady won nine of those previous 13 conference title games when he was in New England and can become the first football player to appear in 10 NFL title games with a win.

Only a handful of players have made it to the championship round in Major League Baseball or the NBA, including some of the most iconic names in both sports.

Yogi Berra has the most with 14 World Series appearances, followed by Mickey Mantle (12), Whitey Ford (11), and Babe Ruth, Joe DiMaggio and Elston Howard (10 each).

In the NBA, Bill Russell is the leader with 12 appearances, followed by Celtics teammate Sam Jones with 11. Kareem Abdul-Jabbar and LeBron James each have 10, with James reaching that mark last season.

NOT SO SWEET HOME: For the third straight season, the New Orleans Saints season ended with a playoff loss at home.

After losing the NFC title game to the Rams in the 2018 season thanks in part to a blown call at the end of regulation and then again in overtime to Minnesota last season, the Saints fell short on Sunday against Tampa Bay after committing four turnovers in a game for the first time since 2016.

The Saints became just the third team to lose a home playoff game in three straight seasons, joining Kansas City (2016-18) and Chicago (1986-88). Drew Brees is the only quarterback to do it as Alex Smith and Patrick Mahomes started the games for the Chiefs and Doug Flutie and Jim McMahon for the Bears.

In all, the Saints have won 49 regular-season games the past four years and don’t have a Super Bowl berth to show for it, having also lost in 2017 at Minnesota. That’s the most wins ever in a four-year span for a team that didn’t make the Super Bowl, according to the Elias Sports Bureau.

PLAYING FROM AHEAD: The Chiefs have an impressive streak of having held a lead at some point in a game for 60 straight contests in the regular season and playoffs, 10 shy of the record set by Seattle (2012-15).

MIGHTY MATT: Packers coach Matt LaFleur is back in the NFC title game for the second time in as many seasons as an NFL coach.

LaFleur is the sixth coach since the merger to make the conference championship game in his first two seasons as an NFL coach and the first to do it since San Francisco’s Jim Harbaugh (2011-12).

All of those coaches made at least one Super Bowl in those years with the exception of Ryan, who lost to Indianapolis and Pittsburgh.

Brady vs. Brees: A matchup for the ages and aged

10-win team to miss playoffs in AFC despite expanded field