In his first official acts as president, Joe Biden is signing executives orders on a broad range of issues, from the coronavirus pandemic to climate change and immigration, to fulfill campaign promises. 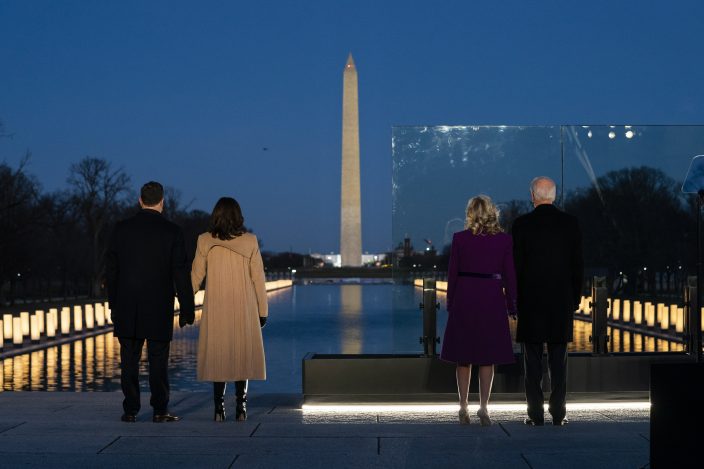 MASK REQUIREMENT: Biden is requiring the use of masks and social distancing in all federal buildings, on federal lands and by federal employees and contractors. Consistently masking up is a practice that science has shown to be effective in preventing the spread of the coronavirus, particularly when social distancing is difficult to maintain.

He is challenging all Americans to wear a mask for the first 100 days of his administration. That’s a critical period, since communities will still be vulnerable to the virus even as the pace of vaccination increases in pursuit of Biden’s goal of 100 million shots in 100 days.

WORLD HEALTH ORGANIZATION: Biden also is directing the government to rejoin the World Health Organization, which Donald Trump withdrew from earlier this year after accusing it of incompetence and bowing to Chinese pressure over the coronavirus.

Symbolizing Biden’s commitment to a more prominent global role, White House coronavirus coordinator Jeff Zients announced that Dr. Anthony Fauci will deliver a speech Thursday to the WHO as head of a U.S. delegation. Fauci, the government's top infectious disease expert, will lay out how the administration intends to work with the WHO on reforms, supporting the coronavirus response and promoting global health and health security

PARIS CLIMATE ACCORD: Biden will sign an executive orders to rejoin the Paris climate accord, fulfilling a campaign pledge to get back into the global climate pact on Day One. Trump, a supporter of oil, gas and coal, had made a first priority of pulling out of global efforts to cut climate-damaging fossil fuel emissions.

It will take 30 days for the U.S. to officially be back in.

REVIEWING TRUMP ROLLBACKS: Biden’s Day One plans also include a temporary moratorium on new Trump administration oil and gas leasing in the Arctic National Wildlife Refuge, moving to revoke a presidential permit for the Keystone XL oil and gas pipeline and reviewing a Trump administration freeze on vehicle mileage and emissions standards. Biden also is setting in motion an evaluation of another Trump move that cut boundaries and protections for some national monuments.

Agencies will be directed to consider impact of climate change on disadvantaged communities and on future generations from any regulatory action that affected fossil fuel emissions, a new requirement.

ENDING BAN ON MUSLIM TRAVELERS: Biden is ending what is variously known as the “travel ban” or the “Muslim ban,” one of the first acts of the Trump administration. Trump in January 2017 banned foreign nationals from seven mostly Muslim countries from entry into the country. After a lengthy court fight, a watered-down version of the rule was upheld by the Supreme Court in a 5-4 decision in 2018.

The new administration says it will improve the screening of visitors by strengthening information sharing with foreign governments and other measures.

BORDER WALL: Biden is immediately ending the national emergency that Trump declared on the border in February 2018 to divert billions of dollars from the Defense Department to wall construction. He also is halting construction to review contracts and how wall money might be redirected.

Despite Trump's repeated promises that Mexico would pay for the wall, U.S. Customs and Border Protection says Americans have committed $15 billion for more than 700 miles (1,120 kilometers). It is unclear how many miles are under contract and what penalties the government would have to pay for canceling them.

The Supreme Court has scheduled arguments Feb. 22 on the legality of Trump’s diverting Defense Department funds for counter-narcotics efforts and military construction projects to wall construction.

DACA: Biden will order his Cabinet to work to preserve the Deferred Action for Childhood Arrivals program, which has shielded hundreds of thousands of people who came to the country as young children from deportation since it was introduced in 2012.

Trump ordered an end to DACA in 2017, triggering a legal challenge that ended in June when the Supreme Court ruled that it should be kept in place because the Trump administration failed to follow federal rule-making guidelines in undoing it. But DACA is still facing legal challenges.

In his presidential proclamation, Biden is calling on Congress to adopt legislation that gives DACA recipients permanent legal status and a path to citizenship. There are currently about 700,000 people enrolled.

DEPORTATIONS: Biden is revoking one of Trump’s first executive orders, which declared that all of the roughly 11 million people in the country illegally are considered priorities for deportation. The Department of Homeland Security will conduct a review of enforcement priorities. Biden’s campaign site says deportations will focus on national security and public safety threats.

The order says nothing about a 100-day moratorium on deportations that Biden promised during the campaign. Susan Rice, who is tapped to run the White House Domestic Policy Council, says any decision on moratoriums would come from Homeland Security.

CENSUS: Biden is reversing a Trump plan to exclude people in the country illegally from being counted in the 2020 Census. The once-a-decade census is used to determine how many congressional seats and Electoral College votes each state gets, as well as the distribution of $1.5 trillion in federal spending each year.

Biden’s team says the new administration will ensure the Census Bureau has time to complete an accurate count for each state and that the apportionment is “fair and accurate.”

Biden is asking the Education Department to extend a pause on federal student loan payments through at least Sept. 30, continuing a moratorium that began early in the pandemic but was set to expire at the end of January.

Borrowers, who owe a collective $1.5 trillion, would not be required to make payments on their federal student loans, their loans would not accrue any interest, and all debt collection activity would halt through September.

Biden's order does not include the type of mass debt cancellation that some Democrats asked him to orchestrate through executive action. He has said that action should come from Congress.

Housing foreclosures and evictions would be delayed until at least March 31, 2021. Almost 12% of homeowners with mortgages are late on their payments, while 19% of renters are behind, according to a Census Bureau survey of households.

The federal moratoriums would ensure that people could stay in their homes even if they cannot afford their monthly bills. Biden is also calling on Congress to extend assistance to renters. While the moratoriums have aided several million Americans during the pandemic and helped to contain the disease, they have also meant that billions of dollars in housing costs have gone unpaid.