A lawyer for the publisher of the Daily Mail newspaper said Wednesday that the Duchess of Sussex had no reasonable expectation of privacy for a letter she sent to her estranged father after her marriage to Prince Harry.

Arguing against the duchess’ privacy-infringement claim, attorney Antony White said “it’s to be inferred that the letter was written and sent by the claimant with a view to it being disclosed to third parties and read by the public.”

He said ex-employees of Meghan and Harry would be able to shed light on the creation of the letter when the case comes to trial. 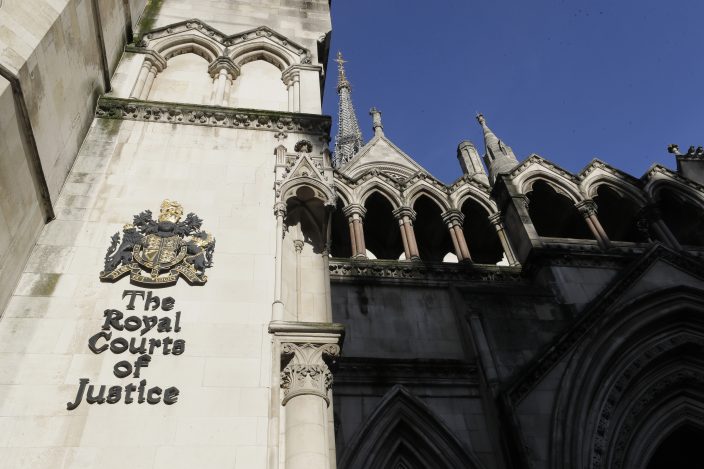 A view of the Royal Courts Of Justice, in London, Tuesday, Jan. 19, 2021. Meghan, the Duchess of Sussex will ask a High Court judge to rule in her favour in her privacy action against the Mail on Sunday over the publication of a handwritten letter to her estranged father. The case will be heard remotely due to the pandemic. (AP PhotoKirsty Wigglesworth)

The former Meghan Markle, 39, is suing publisher Associated Newspapers for invasion of privacy and copyright infringement over five February 2019 articles in the Mail on Sunday and on the MailOnline website, which published portions of a handwritten letter to her father, Thomas Markle, after her 2018 wedding to Harry, a grandson of Queen Elizabeth II.

Associated Newspapers is contesting the claim, and a full trial is due to be held in the autumn at the High Court. In hearings this week the duchess is seeking a summary judgment that would find in her favor and dismiss the newspaper’s defense case without a trial.

Meghan’s lawyer, Justin Rushbrooke, argued Tuesday that that the publisher had “no real prospect” of winning because “it’s a very straightforward case about the unlawful publication of a private letter.”

But the defense argues Meghan wrote the letter as part of a media strategy to rebut a negative view conveyed by her father, and with help from the communications team in the royal couple’s Kensington Palace office.

“Why was the Kensington Palace communications team involved at all in the wording of the letter if it was a wholly private letter?” White said.

He said a full trial would be able to hear important evidence from former palace employees about how the contested letter was written.

Lawyers representing four former Kensington Palace staffers, including ex-communications secretary Jason Knauf, said in a letter submitted to the court that “one or more of our clients” would be able to provide insight on “whether or not the claimant anticipated that the letter might come into the public domain,” and whether or not Meghan “directly or indirectly provided private information” to the authors of a book about her and Harry, called “Finding Freedom.”

Meghan, an American actress and star of TV legal drama “Suits,” married Harry at Windsor Castle in May 2018. Their son, Archie, was born the following year.

A year ago, Meghan and Harry announced they were quitting royal duties and moving to North America, citing what they said were the unbearable intrusions and racist attitudes of the British media. They recently bought a house in Santa Barbara, California.

Judge Mark Warby is expected to rule on the application for summary judgment at a later date.