Atalanta missed the chance to go third in Serie A after being held to a 1-1 draw at relegation-threatened Udinese in a rearranged match on Wednesday.

Udinese stunned Atalanta by scoring in the opening minute but Luis Muriel canceled out Roberto Pereyra’s goal on the stroke of halftime.

Atalanta remained sixth, a point below the top four and 10 adrift of league leader AC Milan. Udinese is now four points above the relegation zone. 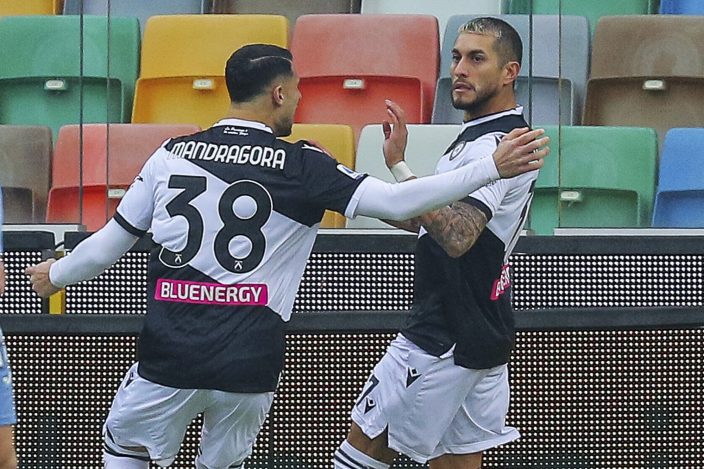 Udinese's Roberto Pereyra, right, is congratulated by teammate Rolando Mandragora after scoring his side's first goal during the Serie A soccer match between Udinese and Atalanta at the Dacia Arena Stadium in Udine, Italy, Wednesday, Jan. 20, 2021. (Andrea BressanuttiLaPresse via AP)

The match in Udine was originally set for Dec. 6 but the ground was waterlogged.

Udinese, which had lost four of its past five matches, got off to a great start when Pereyra cut in from the right and placed an angled drive between keeper Pierluigi Gollini’s legs to give his side the lead after 23 seconds. 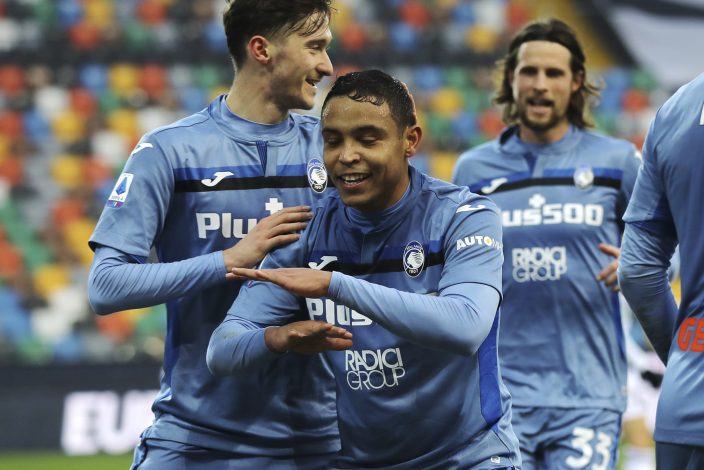 Atalanta's Luis Muriel celebrates after scoring his side's first goal during the Serie A soccer match between Udinese and Atalanta at the Dacia Arena Stadium in Udine, Italy, Wednesday, Jan. 20, 2021. (Andrea BressanuttiLaPresse via AP)

Atalanta dominated possession but it was Udinese which looked the more threatening. However, the visitors leveled moments before the interval when Muriel gathered the ball just outside the area and beat two players before slotting past keeper Juan Musso.

Udinese had the ball in the net four minutes from time but defender Marvin Zeegelaar’s strike was ruled out for his foul on Gollini.

Board leaders of Texas' grid operator resign after ...

A group of Rohingya refugees is ad ...

Lazio moves 4th in Italy with 1-0 win over Sampdoria

Roma beats Udinese to move into 3rd ahead of Inter vs. Lazio

Bologna, Benevento draw 1-1 and swap places on Serie A table