Quite suddenly, if only for a freeze-frame moment, everything old was new again, starting when Joe Biden stepped outside into his day and Donald Trump vanished inside Air Force One for his flight to private life in Florida.

Democratic and Republican leaders worshipped together at church, just one tradition dusted off. The centuries-old rituals of a peaceful transfer of power unfolded from the high platform of the flag-bedecked Capitol, still recovering from insurrection.

With Trump gone, calls for and scenes of unity and grace were the order of the day, exactly four years after his dark talk of “American carnage.” 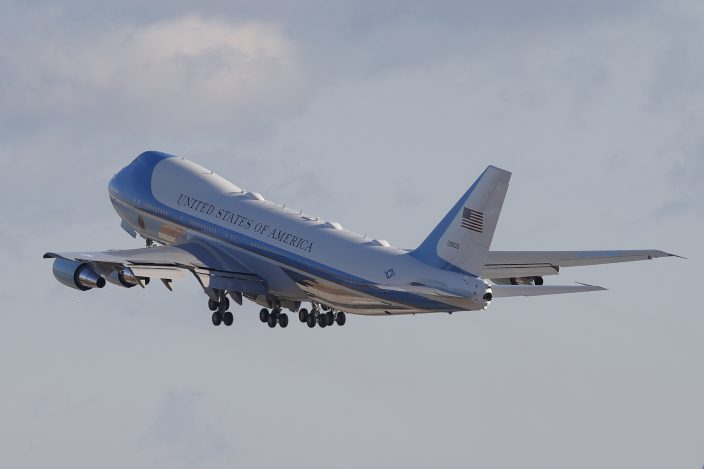 As if their footsteps had been choreographed, Biden emerged from Blair House across the White House on his way to church just as the outgoing president disappeared into the plane at Joint Base Andrews. But the outgoing president was not one to coordinate anything with the incoming one. And not long later, Trump issued one more pardon.

Trump never conceded the election, declined to attend the inauguration, upended the tradition of sending a government plane to bring the president-elect to Washington and didn’t extend the usual invitation to greet the almost-president to the White House before the swearing in.

Biden was opening his presidency without a welcome or even personal acknowledgment from the man he defeated. 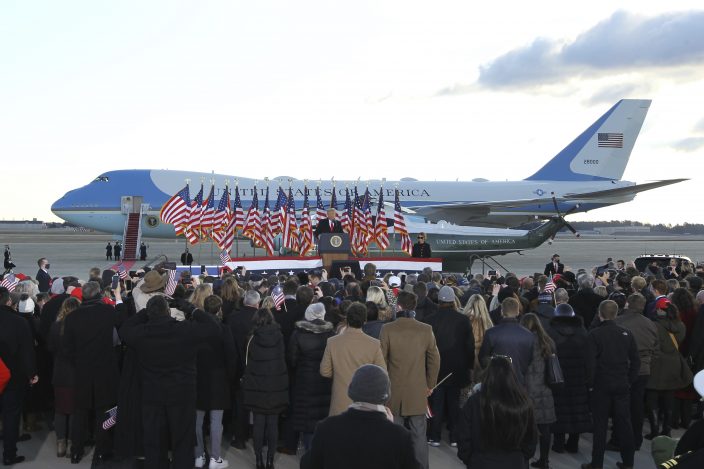 Under threat of conviction from the Senate on an accusation of inciting insurrection, Trump departed with a perfunctory nod to those who have died from the coronavirus, a obligatory mention of wishing “luck” to the next administration without mentioning Biden’s name, a premature claim on any success Biden might have, and the cloudy threat of a return.

“Have a nice life,” Trump said in remarks to well-wishers upon his departure. As Air Force One flew low along the coast, Biden’s inauguration played on Fox News on television aboard the flight. Trump’s family was on board. He spent some of the flight with flight staff who went up to him to say goodbye.

Rituals of the republic went on without him. 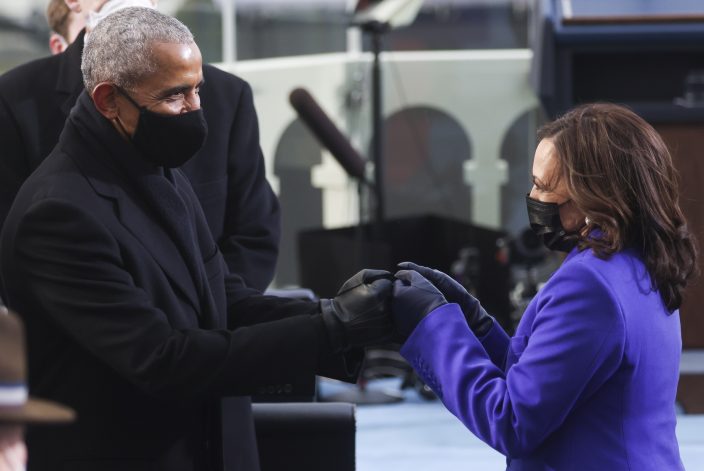 In a striking tableau at the Capitol, three former presidents and first ladies of different parties mingled as though at a cocktail party.

The inauguration crowds were sparse by design, with invitation-only guests at the immediate scene and 200,000 small flags standing in place of the citizens who would have come if the capital’s core hadn’t been under military lock and key and if no pandemic had been sweeping the country.

Yet Raelyn Maxwell of Park City, Utah, came with an American flag, a poster board sign reading "Dear Women of Color, thank you” and a bouquet of roses she hoped to toss to Kamala Harris if she could somehow get close enough to the incoming vice president.

“I protested 45’s inauguration," she said of Trump, the 45th president, "and I wanted to be here when he left. “And I wanted to celebrate the new president.” She also carried Champagne to roast the occasion with friends here from France.

Biden, the second Roman Catholic president, attended a morning mass at St. Matthews Church with at least three Baptists — Harris and Republican leaders Mitch McConnell from the Senate and Kevin McCarthy from the House — and the Senate Democratic leader Chuck Schumer, who is Jewish.

It was one of those bipartisan, not to mention multifaith, events that Washington is known for, coexisting with searing political division. 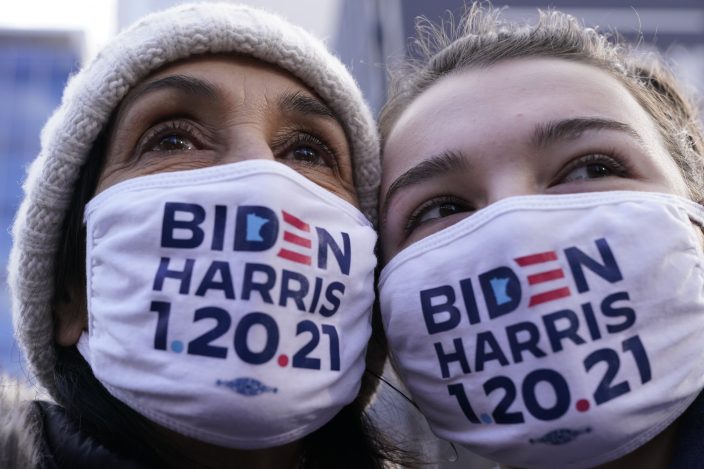 Christine Alverno and her daughter Julia Crump, of Troy, Mich., try to get a glimpse of President-elect Joe Biden as he leaves an early morning church service, in Washington, Wednesday, Jan. 20, 2021. (AP PhotoJacquelyn Martin)

St. Matthew, patron saint of civil servants, was a tax-collector and, on the brighter side, an apostle who exhorted, “Love your enemies, bless them that curse you, do good to them that hate you,” according to the church's teachings. There were stirrings of that Wednesday.