American teenager Matthew Hoppe scored for the third consecutive Bundesliga game but couldn’t prevent Schalke from slumping to a 2-1 loss to fellow struggler Cologne on Wednesday.

Jan Thielmann struck in the third minute of injury time for Cologne to end its five-game run without a win and leave the relegation zone. Schalke remains in last place with seven points at the halfway stage of the season.

The 19-year-old Hoppe grabbed his fifth goal of 2021 in the 57th minute, nipping in to sweep home the equalizer after Amine Harit combined with Suat Serdar. 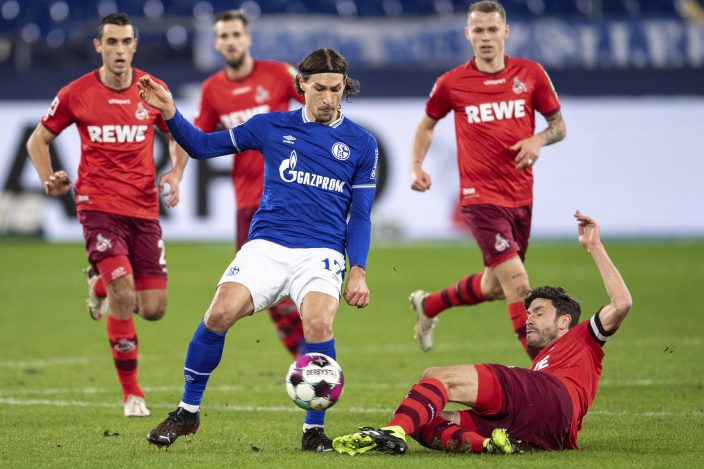 Schalke's Benjamin Stambouli, left and Cologne's Jonas Hector fight for the ball, during the German Bundesliga soccer match between Schalke and Cologne, at Veltins-Arena, in Gelsenkirchen, Germany, Wednesday, Jan. 20, 2021. (Marius Beckerdpa via AP)

Hoppe is the third American to score in three consecutive German league games after Eric Wynalda with Saarbrücken in 1992 and Clint Mathis with Hannover in 2004. He already has more goals this year than compatriot Weston McKennie managed as Schalke’s top scorer with three in 2020.

Hoppe started up front for Schalke despite the club re-signing veteran Dutch striker Klaas Jan Huntelaar from Ajax the day before. A calf problem prevented the 37-year-old forward making his second Schalke debut.

Cologne defender Rafael Czichos scored in the 31st after the home team failed to properly clear a corner. It was Cologne’s first goal in six games.

Kingsley Ehizibue almost made it 2-0 shortly afterward but was blocked at close range by Schalke goalkeeper Ralf Fährmann.