An end-to-end match in which City lost Kevin De Bruyne and Kyle Walker to injuries looked to be heading for a draw, despite the home team’s dominance, when Silva received a pass from Rodri and smashed home a shot from the edge of the area in the 79th minute.

The goal was awarded even though Rodri had just returned from an offside position, with the officials seemingly feeling a new phase of play had started when the midfielder dispossessed Villa defender Tyrone Mings before releasing Silva. 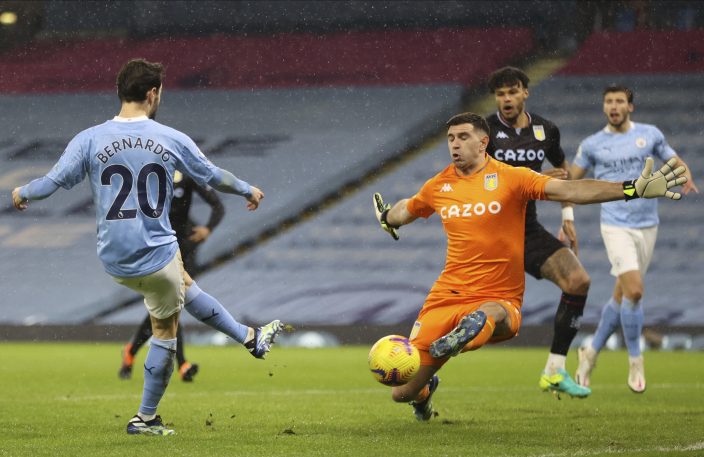 Aston Villa's Emiliano Martinez save the ball during the English Premier League soccer match between Manchester City and Aston Villa at the Etihad Stadium in Manchester, England, Wednesday, Jan.20, 2021. (Clive BrunskillPool via AP)

Villa manager Dean Smith was sent off for protesting against the awarding of the goal.

Gundogan wrapped up the win in the 90th minute by converting a spot kick after Matty Cash raised his hand to block a goalbound header from Gabriel Jesus.

The win lifted City above Leicester to the top of the league, although Manchester United can reclaim first place by beating Fulham later Wednesday. 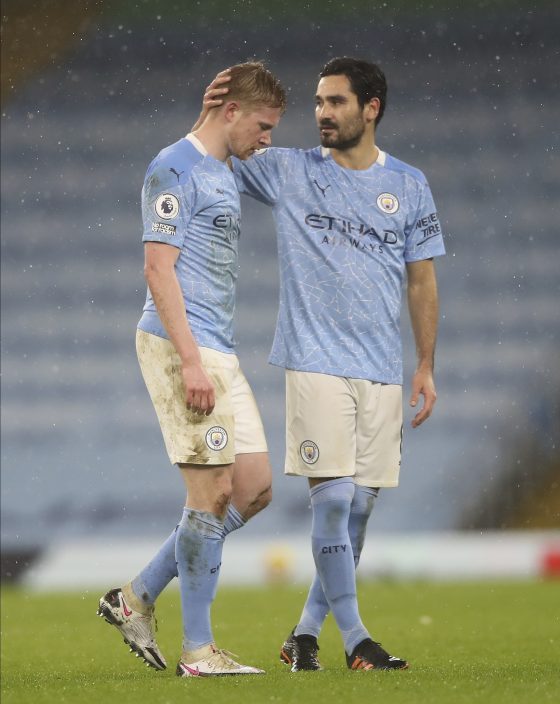 It was Villa’s first league match since Jan. 1, after which there was a coronavirus outbreak in the squad that led to the training ground being closed. Villa reported that nine players contracted COVID-19 in that period but Smith was able to field a full-strength lineup against City, with the squad only back in training since Sunday.

Villa was on the back foot for the entire match, however, only holding on thanks to a series of last-ditch blocks and some fine goalkeeping from Emi Martinez.

Walker was substituted with an apparent leg muscle injury in the 27th minute, while De Bruyne hobbled off in the 59th shortly after being fouled by Jack Grealish.