Justin Champagnie's play left no doubt. Neither did his words.

Minutes after the Pittsburgh sophomore forward scored the last of his 31 points and grabbed the final of his 14 rebounds in a 79-73 victory over Duke inside a largely empty Petersen Events Center on Tuesday night, Champagnie provided little room for interpretation on the significance.

“It means Pitt is back,” Champagnie said. "I think that we are going to continue to keep this up, and try our best and work hard and just take everything that that’s not given to us.” 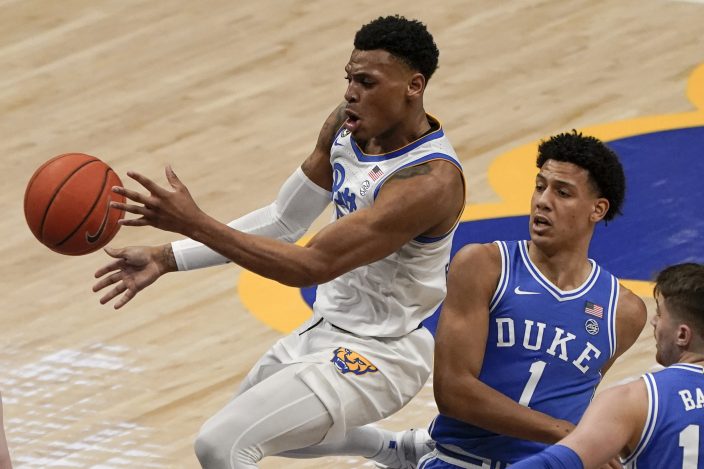 Pittsburgh's Au'diese Toney, left, passes after getting by Duke's Jalen Johnson (1) during the first half of an NCAA college basketball game, Tuesday, Jan. 19, 2021, in Pittsburgh. (AP PhotoKeith Srakocic)

Meaning, just about everything. Jeff Capel took over a program in the middle of a freefall following Jamie Dixon's departure in 2016 and two tumultuous, unsuccessful seasons under Kevin Stallings.

There's been incremental progress. Capel coaxed 14 wins out of a largely overhauled roster during his first season. The Panthers inched forward to 16-17 last year. Both times, early optimism of a true breakthrough faded. Pitt lost 14 of its final 16 in 2019 and 8 of its last 9 in 2020.

This, however, feels different. The triumph over Duke — the first-ever by a former Blue Devil player over Hall of Fame coach Mike Krzyzewski — provided a glimpse of what Capel is building. The Panthers are 8-2 overall and 4-1 in the Atlantic Coast Conference, with a schedule that looks manageable if they actually get to play it.

That's far from a certainty. Pitt's visit to Boston College on Saturday has been pushed back due to COVID-19 concerns in the Eagles program, the fifth time the Panthers have had a game postponed. Still, they'll have a chance to put together their first four-game ACC winning streak since 2014 when they play at Wake Forest on Saturday instead.

And they'll take the court with a level of confidence seldom seen since Dixon was regularly leading Pitt to the second weekend of the NCAA tournament a decade ago.

“A number of those kids, they were (really young) last year,” Krzyzewski said of his former player and longtime assistant's current team. “And one of the best ways of worrying is to go through that and that’s how (Capel has) built his program. They’re tough through experience. They played a lot of minutes last year and had showed flashes of really playing well. Now they’re ready to take another step.”

Pitt held Duke to 39% shooting and fought the bigger, deeper Blue Devils to a draw on the glass. The versatile and tenacious Champagnie — who returned two weeks ahead of schedule from a left knee injury sustained just before Christmas — and junior guard/forward Au'Diese Toney attacked relentlessly. Point guard Xavier Johnson, whose decision-making has been uneven at times this season, dished out 11 assists.

Three times in the final 5:38 Duke trimmed a 15-point deficit to two. Each time, the Panthers responded before pouring onto the court in celebration, their joy echoing through a typically raucous arena limited to just 500 people.

“We had to fight for 40 minutes,” Capel said. “We were able to sustain a lead throughout the game, even when they made runs that we knew they were going to make.”

Now comes perhaps the hardest part of the process: dealing with success. There were times last season when it seemed as if the Panthers had gotten over the hump only to stumble. At one point Capel pointed out the group he'd assembled hadn't done much of anything.

A few more performances like the one they put together against one of the nation's premier programs — even one that's struggling by its impeccable standards — and that will no longer be the case. Capel stressed the importance of upgrading the talent at hand when he took the job. He's on his way. Forward Abdoul Coulibaly has made major strides in his second season. Transfers Ithiel Horton and Nike Sibande provide shooting and backcourt depth.

Champagnie, Toney and Johnson take care of a lion's share of the rest. Johnson — whose roller-coaster three seasons at Pitt perhaps best embodies the program's rocky rise back to relevance — made two of the headiest decisions of the night in the final 1:40. He hit a driving lay-up and fed Toney for a dunk on consecutive possessions that all but ended Duke's hopes.

“One of the great things about Xavier is he is such a great competitive spirit, but at times it can be a bad thing for him,” Capel said. "It’s finding the right balance there are times when he’s so excited and so geared up where he can get himself in a little bit of trouble. However, he’s matured as a player ... I trust him to make the right decision ... and he was able to make us some big plays.”