The South Carolina Democrat is largely credited with giving Biden the endorsement he needed to shoot to the top of 2020′s large Democratic field and win his party's nomination. 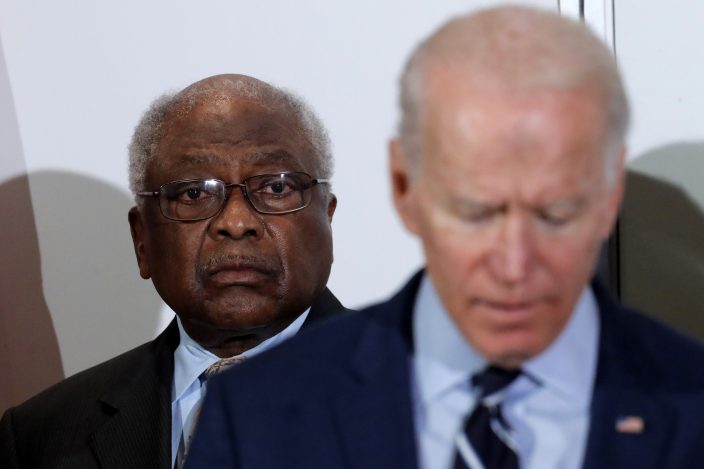 FILE - In this Feb. 26, 2020 file photo, House Majority Whip, Rep. Jim Clyburn, D-S.C., background, listens as Democratic presidential candidate former Vice President Joe Biden, speaks at an event where Clyburn endorsed him in North Charleston, S.C. “What I think we need to do now is support this new administration that seems to have leadership as a part of his agenda,” said Clyburn, a close ally of Biden. “We are where we are today because of a lack of leadership and I think that Joe Biden has demonstrated in his articulations that he’s prepared to provide the kind of leadership that we need.” (AP PhotoGerald Herbert, File)

Clyburn, on a call with reporters, said Bush told him, “you know, you’re the savior, because if you had not nominated Joe Biden, we would not be having this transfer of power today.” He said Bush added that Biden was the only Democratic candidate he felt could have defeated President Donald Trump.

Bush, who has largely stayed out of politics since leaving the White House, chose “none of the above” in the 2016 presidential election but has not revealed how he voted in 2020.

In a statement issued following Biden's victory, he wrote, “Though we have political differences, I know Joe Biden to be a good man" and added, "I offered him the same thing I offered Presidents Trump and Obama: my prayers for his success, and my pledge to help in any way I can.”

“Let’s not make this into more than it is,” he wrote on Twitter, adding that the former president was “saying Clyburn helped saved Biden’s nomination ... nothing Biblical here."

Clyburn’s pivotal endorsement before South Carolina’s Democratic primary seemed to have brought Biden’s candidacy back from the brink following lackluster performances in other early states. It was an awaited signal for many Black voters that Biden would be the candidate to stand up for their interests.

Clyburn, South Carolina’s only Democratic representative in Congress, is the dean of the state’s Democrats and the third-ranking member of the U.S. House.

Clyburn said that his backing of Biden also came up Wednesday during conversations with former President Bill Clinton and Hillary Clinton, the party's 2016 nominee.