Five trucks carrying oxygen from Venezuela arrived at Manaus, a city of 2 million people in the Brazilian rainforest where the local health system has collapsed amid a devastating second wave of COVID-19 and a severe shortage of oxygen for breathless patients.

Venezuela's consul in Manaus, Patricia Silva, said the trucks delivered 132,000 liters of oxygen late Tuesday. They came from the state of Bolivar in southern Venezuela and travelled more than 1,500 kilometers (930 miles) to Manaus, the capital of Brazil's Amazonas state.

"We, as the Bolivarian government, defend our principles of cooperation and solidarity. Solidarity among peoples will save us, especially in this terrible pandemic," Silva told journalists in Manaus. 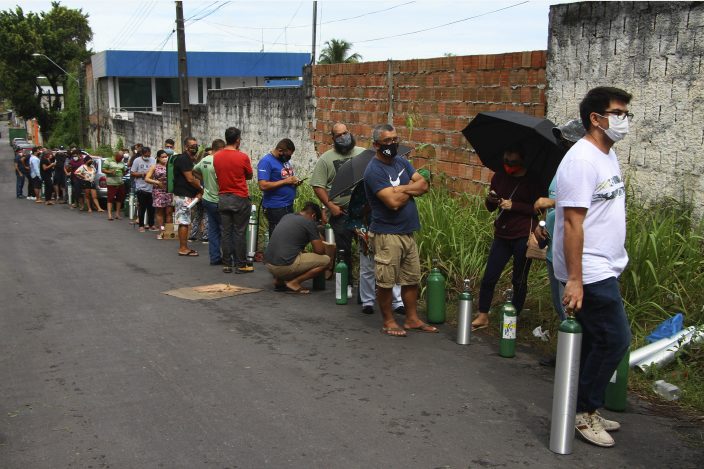 Family members of patients hospitalized with COVID-19 line up with empty oxygen tanks in an attempt to refill them, outside the Nitron da Amazonia company, in Manaus, Amazonas state, Brazil, Friday, Jan. 15, 2021. (AP PhotoEdmar Barros)

Marcellus Campelo, secretary of health in Amazonas, said the delivery would help balance the oxygen supplies of local hospitals.

Venezuelan President Nicolas Maduro announced the move Sunday night. He is a political adversary of Brazilian President Jair Bolsonaro, who has drawn criticism for his handling of the crisis in Manaus as well as the pandemic in general, which has caused more than 207,000 deaths in Brazil.

Amazonas Gov. Wilson Lima is an ally of Bolsonaro's, but has praised Maduro for his support. 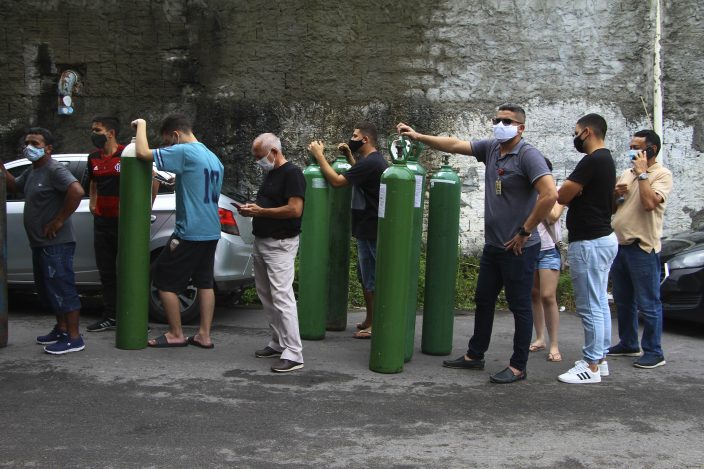 Family members of patients hospitalized with COVID-19 line up with empty oxygen tanks in an attempt to refill them, outside the Nitron da Amazonia company, in Manaus, Amazonas state, Brazil, Friday, Jan. 15, 2021. Doctors in the Amazon rainforest’s biggest city are having to choose which COVID-19 patients can breathe amid dwindling oxygen stocks and an effort to airlift some of the infected to other states. (AP PhotoEdmar Barros)

“Any help, any donation that we are receiving is very welcome. Especially this big donation that is coming from Venezuela,” Campelo said.

Brazil’s government is one of more than 50 nations around the world that recognize opposition leader Juan Guaidó as Venezuela’s legitimate leader, rather than Maduro, who maintains control over the nation.

In Venezuela, which has decreed a pandemic lockdown since March 16, there have been more than 119,000 confirmed coronavirus cases and more than 1,000 deaths related to COVID-19. Experts say the low number of cases in comparison with neighboring nations is largely due to the isolation that Venezuela is under after years of political, economic and social crisis. 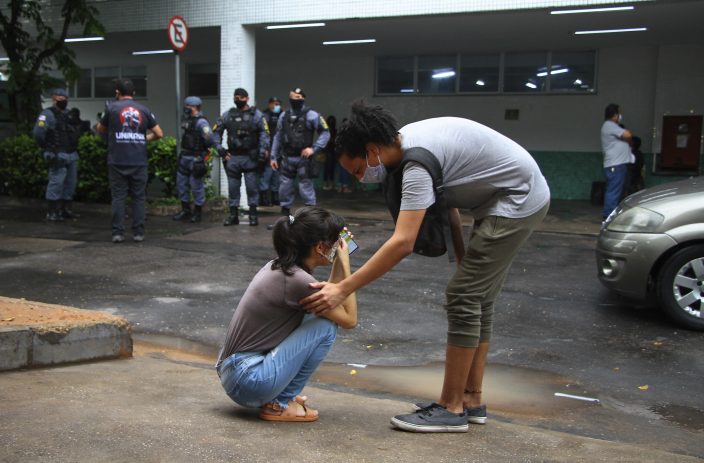 Raissa Floriano whose father is hospitalized with COVID-19, cries during a protest amid the new coronavirus pandemic outside the 28 Agosto Hospital, in Manaus, Brazil, Thursday, Jan 14, 2021. Scores of COVID-19 patients in the Amazon rainforest's biggest city will be transferred out of state as the local health system collapses and dwindling stocks of oxygen tanks begin to falter. (AP PhotosEdmar Barros)