After taking the oath of office Wednesday, President Joe Biden issued a rare repudiation of white supremacy and domestic terrorism seen on the rise under his predecessor’s watch.

In his inaugural address, Biden denounced the “racism, nativism, fear, demonization,” that propelled the assault on Capitol Hill by an overwhelmingly white mob of Donald Trump supporters who carried symbols of hate, including the Confederate battle flag.

“A cry for racial justice some 400 years in the making moves us,” Biden said in the nearly 23-minute-long speech promising to heal a divided nation. “A cry that can’t be any more desperate or any more clear. And now a rise of political extremism, white supremacy, domestic terrorism that we must confront and we will defeat.” 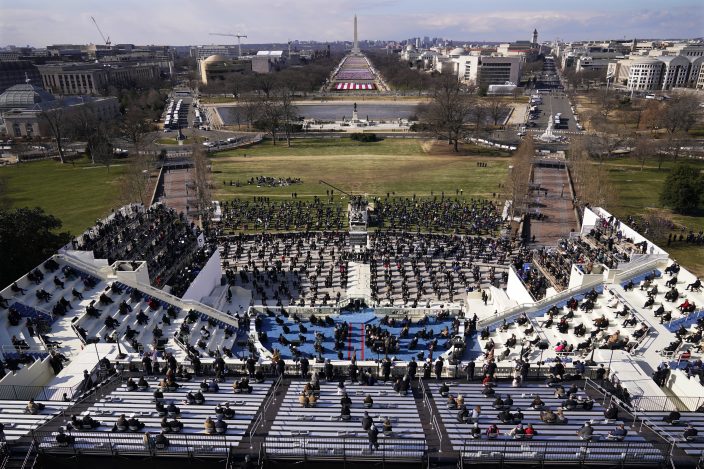 Compared to his immediate predecessors, three of whom attended Wednesday's inauguration, Biden is the first president to directly address the ills of white supremacy in an inaugural speech. In his second inaugural address in 1997, former President Bill Clinton called out racial divisions as “America’s constant curse,” but stopped short of naming culprits.

Biden’s words follow months of protests and civil unrest over police brutality against Black Americans, as well as a broader reckoning on the systemic and institutional racism that has plagued nonwhite Americans for generations.

“To be perfectly clear, it was incredibly powerful,” Rashad Robinson, president of Color of Change, a national racial justice organization, told The Associated Press. “We shouldn’t underestimate the cultural change that had to take place, in order for that to happen on one of the biggest political stages in the world.” 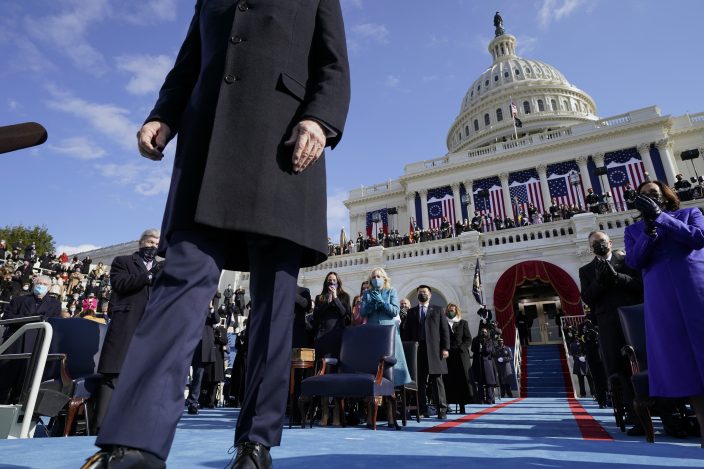 President Joe Biden walks to a podium to speak after he was sworn-in during the 59th Presidential Inauguration at the U.S. Capitol in Washington, Wednesday, Jan. 20, 2021. (AP PhotoAndrew Harnik, Pool)

“I think it’s just really important that, as a result of our movement, racial justice became a majoritarian issue this summer,” Robinson added. “Now the work begins in translating that rhetorical issue into a governing issue.”

Biden delivered his inaugural address on the very platform that the insurrectionist mob scaled two weeks ago to breach the Capitol building, vandalizing federal property and taking selfies on the Senate floor. The riot left at least five people dead, including a Capitol police officer.

The rioters, some espousing racist and anti-Semitic views and conspiracy theories, were incited by baseless claims of widespread voter fraud in the November presidential election. Some attempted to stop Congress from certifying the Electoral College results, in which Black and Latino voters played a significant role in handing victory to Biden and Vice President Kamala Harris. 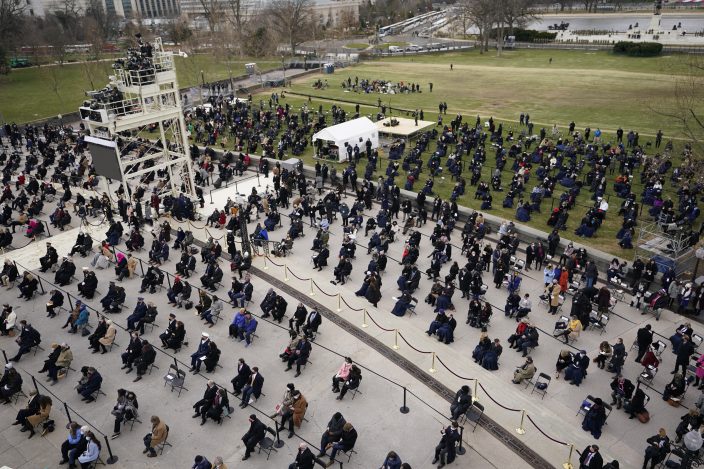 during the 59th Presidential Inauguration at the U.S. Capitol in Washington, Wednesday, Jan. 20, 2021. (AP PhotoCarolyn Kaster)

Voter suppression, along with other forms of systemic racism, are top of mind for civil rights groups and supporters of Black Lives Matter, which last year became the largest protest movement in U.S. history.

“To overcome these challenges, to restore the soul and secure the future of America requires so much more than words,” Biden said in his speech. “It requires the most elusive of all things in a democracy. Unity.”

Biden also highlighted the historic nature of the swearing in of Harris, the first woman and first Black and South Asian person to hold that office. 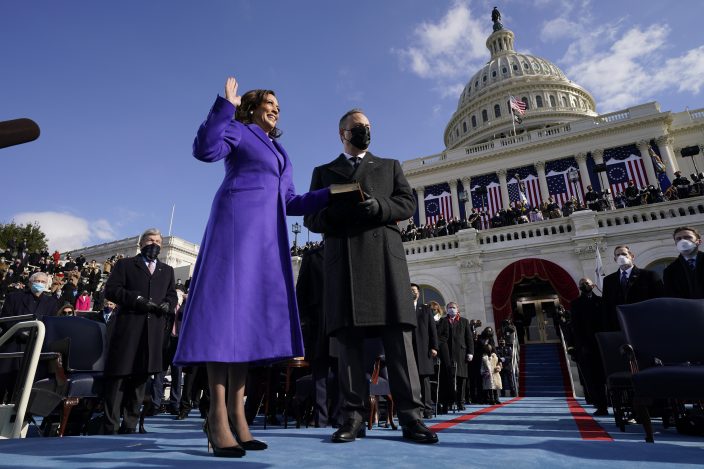 Kamala Harris is sworn in as Vice President by Supreme Court Justice Sonia Sotomayor as her husband Doug Emhoff holds the Bible during the 59th Presidential Inauguration at the U.S. Capitol in Washington, Wednesday, Jan. 20, 2021. (AP PhotoAndrew Harnik, Pool)

“It is exciting to see a Black woman become vice president, and yet we must hold her and President Biden accountable to ensure Black liberation and the eradication of white supremacy,” said Patrisse Cullors, co-founder and executive director of Black Lives Matter Global Network Foundation.

“We must heal from anti-Black racism and the heavy health and economic impacts from COVID-19,” Cullors said in a statement. “Then, we can focus on thriving Black lives through investments in health, education, housing, and environmental justice.”

Biden began addressing some of these issues in a series of executive orders signed after the inauguration.

They order federal agencies to prioritize racial equity and review policies that reinforce systemic racism, which the BLM foundation said mirrors a proposal contained in the BREATHE Act, proposed legislation championed by the foundation and the Movement for Black Lives. It calls for sweeping federal reforms, including overhauling police, the criminal justice system and immigration enforcement.

Susan Rice, Biden’s incoming domestic policy adviser, said the new president would also revoke the just-issued report of Trump’s “1776 Commission,” downplaying the historic legacy of slavery in the United States. The commission was created in response to The New York Times’ “1619 Project,” which highlights the long-term consequences of slavery and the contributions of Black Americans.

Biden's remarks also came a day after the nation marked yet another grim milestone surpassing 400,000 deaths as a result of the COVID-19 pandemic. The pandemic has disproportionately killed Black Americans and other people of color and laid bare longstanding racial disparities in the country’s health system.

“We are entering what may be the toughest and deadliest period of the virus,” Biden said. “We must set aside politics and finally face this pandemic as one nation.”

“Today, on this January day, my whole soul is in this,” he declared.