A worker trapped in a Chinese gold mine for more than a week has died as rescuers try to clear debris and improve ventilation to save 21 others also stuck deep below ground, state media reported Thursday.

Rescuers have been in contact with 11 workers trapped in one chamber and have delivered food, medicine and other supplies to them. State media said one of them had suffered a head injury in the initial explosion and lapsed into a coma before dying.

Two other workers in that group were described as in poor health. Another was reportedly alive in a nearby chamber, but the fate of another 10 workers remains unknown. 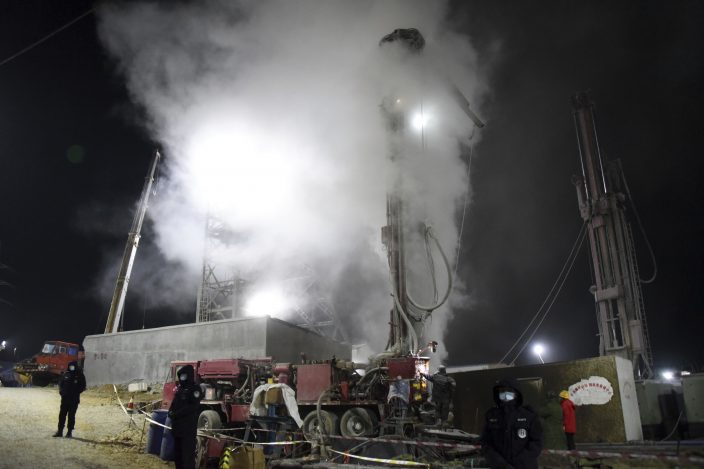 In this photo released by China's Xinhua News Agency, rescuers drill a new channel at the explosion site of a gold mine in Qixia City, east China's Shandong Province, Monday, Jan. 18, 2021. Chinese state media say 12 out of 22 workers trapped for a week by an explosion in the gold mine are alive, as hundreds of rescuers seek to bring them to safety. (Wang KaiXinhua via AP)

The reports said exhaustion has set in among some of the workers since the Jan. 10 explosion ripped through the mine that was under construction in Qixia, a jurisdiction under Yantai in the eastern province of Shandong.

Rescuers were attempting to clear cages, skips and other debris blocking the main shaft while drilling other shafts for communication, ventilation and possibly to lift workers to the surface. Boring has reached depths of around 700 meters (about 2,000 feet), the reports said.

Mine managers have been detained for waiting more than 24 hours before reporting the accident, the cause of which has not been announced. 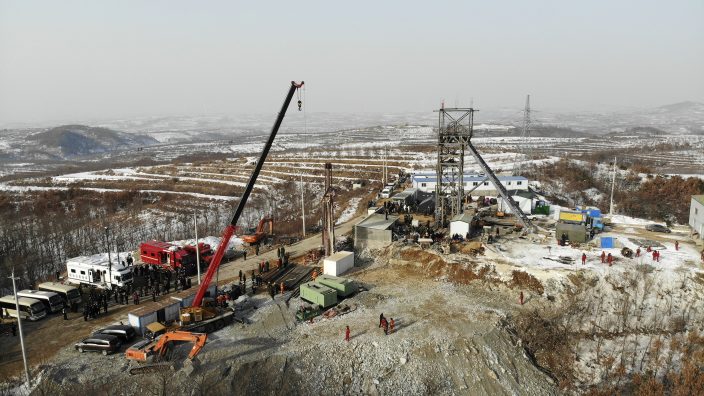 In this photo released by China's Xinhua News Agency, rescuers work at the site of a gold mine that suffered an explosion in Qixia in eastern China's Shandong Province, Wednesday, Jan. 13, 2021. Authorities have detained managers at a gold mine in eastern China where more than 20 workers have been trapped underground following an explosion Sunday. (Wang KaiXinhua via AP)

Increased supervision has improved safety in China’s mining industry, which used to average 5,000 deaths per year. Yet demand for coal and precious metals continues to prompt corner-cutting, and two accidents in Chongqing last year killed 39 miners.

12 workers trapped week ago in China mine blast are alive

Managers detained as 22 trapped in China mine for 3rd day