Kyrie Irving returned from his personal “pause” to score 37 points in his first game with Kevin Durant and James Harden, but the new-look, star-studded Brooklyn Nets gave up 42 to Collin Sexton and lost 147-135 in double overtime to the Cleveland Cavaliers on Wednesday night.

Sexton scored 15 points in the second OT — most of them over Irving. Sexton made two 3-pointers and fed Taurean Prince for another in a span of 55 seconds to help Cleveland put away Brooklyn. 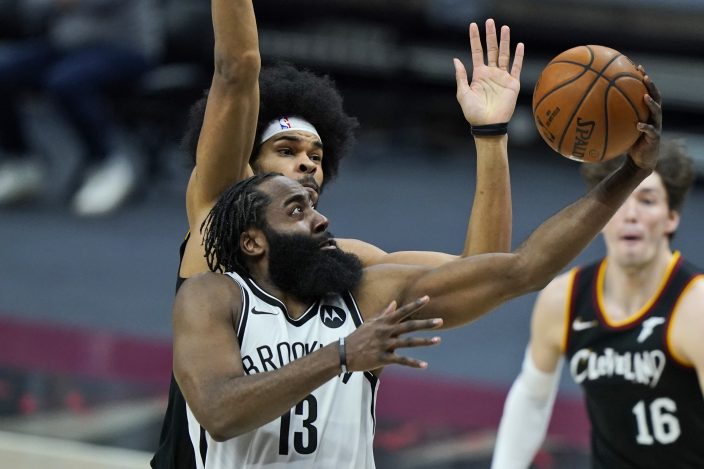 Brooklyn Nets' James Harden (13) drives to the basket against Cleveland Cavaliers' Jarrett Allen (31) during the second half of an NBA basketball game, Wednesday, Jan. 20, 2021, in Cleveland. The Cavaliers won 147-135 in double-overtime. (AP PhotoTony Dejak)

As he knocked down one big shot after another in the second OT, players on Cleveland’s bench were tackling each other in delight. Cedi Osman added 25 points and Prince — acquired in the four-team deal that brought Harden to Brooklyn — has 17 in his Cavs debut.

The Nets overcame a 13-point deficit in the fourth quarter and tied it at 113-all on Irving’s putback with 1:10 left. Brooklyn had a chance in the closing seconds after Sexton’s turnover, but couldn’t score. 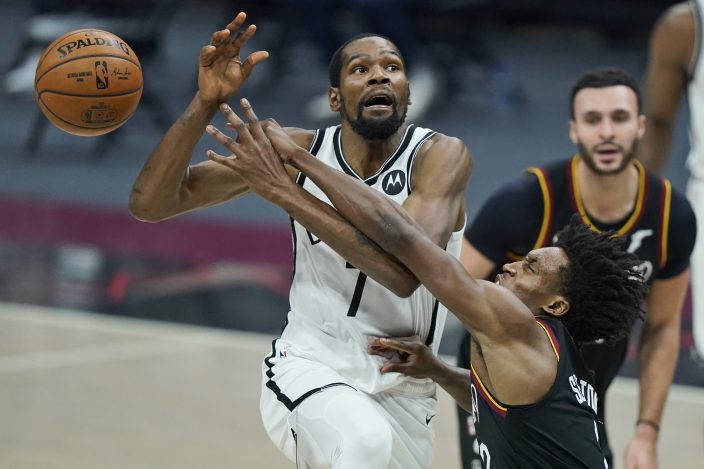 Jaylen Brown led the Celtics with 26 points, and Marcus Smart had 25. Kemba Walker scored 19 points in his second game of the season after he missed the first 11 with a left knee injury.

Grant had a career-high 32 points, including all of Detroit’s nine points in overtime, to continue his hot start to the season. But the Pistons fell to 3-11, the worst record in the Eastern Conference.

The short-handed Pacers have lost two straight by double digits, their two most-lopsided losses of the season. Malcolm Brogdon had 26 points, and Domantis Sabonis had 25 points and nine rebounds, ending his streak of double-doubles at 13.

Cole Anthony hit a hurried 3-pointer at the buzzer and Orlando stunned short-handed Minnesota to stop a six-game losing streak.

Nikola Vucevic had 28 points and eight rebounds for Orlando. Evan Fournier added 24 points in his return after missing nine games with lower back spasms.

Minnesota led by 20 before the Magic slowly chipped away in the second half. Jarred Vanderbilt missed a pair of free throws with a chance to ice the game for the Timberwolves. Anthony grabbed the rebound on the final miss, pushed the ball quickly up court and the rookie drained a contested 3 from the right wing to win the game.

Kendrick Nunn scored 28 points and injury-plagued Miami pulled away in the second half to beat Toronto.

Fred VanVleet had 24 points and nine assists for the Raptors.