David Halls isn’t a doctor, nurse or ambulance driver, but he wanted to contribute in the fight against COVID-19. So he did what he does best: He sat down on the bench beside at Salisbury Cathedral’s historic organ and began to play.

Halls is one of the many people who have turned the 800-year-old cathedral in southwestern England into a mass vaccination center as the U.K. races to inoculate 50 million people. His contribution to the effort is offering a bit of Bach, Handel and even a little Rodgers & Hammerstein to the public as they shuffle through the nave to get their shots.

“At times of crisis, people come together and want to listen to music; at moments of joy, people want to listen to music,’’ Halls, the cathedral’s music director, told The Associated Press. “And so I don’t think it’s any surprise the effect of soothing music on people who probably are feeling quite stressed for various reasons.” 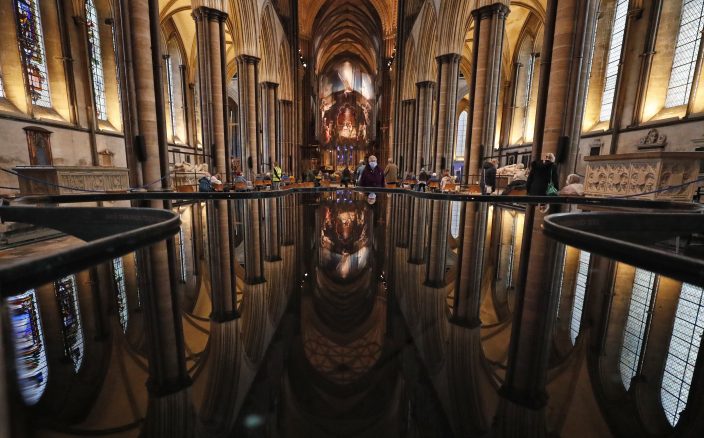 People are reflected in the 'Refection Pool' inside Salisbury Cathedral in Salisbury, England, Wednesday, Jan. 20, 2021, as they leave after receiving their Pfizer-BioNTech vaccination. Salisbury Cathedral opened its doors for the second time as a venue for the Sarum South Primary Care Network COVID-19 Local Vaccination Service. (AP PhotoFrank Augstein)

Salisbury Cathedral, home to one of the best preserved copies of the Magna Carta and England’s tallest church spire, has been enlisted as a vaccination center as the government expands its shot program to football stadiums, convention centers and hundreds of local doctors offices to speed delivery.

Hundreds of elderly residents have rolled up their sleeves and got their shots in the great nave, which is big enough to gather people together while also keeping them safely apart.

It's in stark contract to 1627, when church leaders locked the cathedral gates to keep townspeople out as plague swept through Salisbury. Canon Nicholas Papadopulos, dean of the cathedral, says he reflected on that episode with “visceral discomfort” last year when he celebrated the building's 800th anniversary. 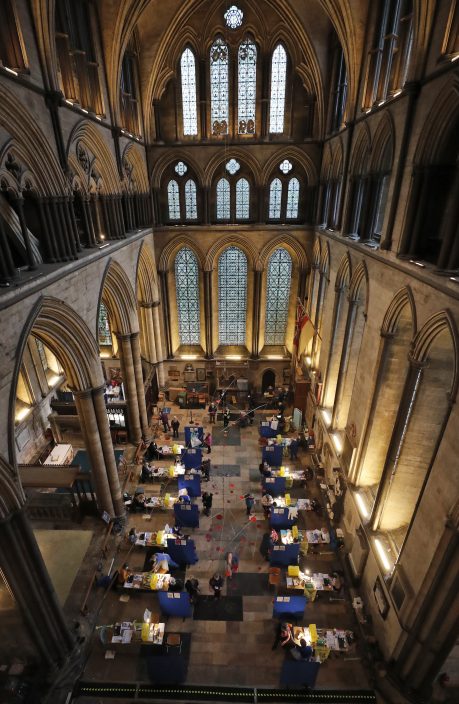 Now, it's time for a new chapter.

The U.K. plans to offer a first dose of vaccine to more than 15 million people by mid-February as it targets the country’s oldest and most vulnerable residents in the program's first phase. Progressively younger groups of people will follow suit, with the government planning to reach everyone over 18 by September. 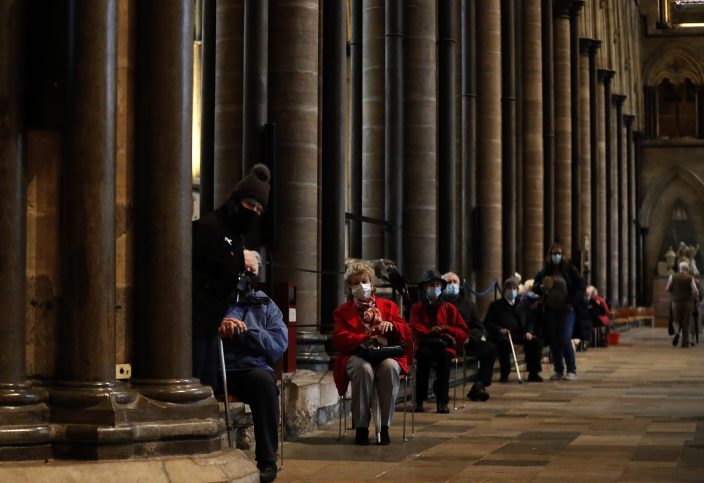 The need is urgent. Britain’s healthcare system is staggering as doctors and nurses battle a more contagious variant of COVID-19.

While new infections appear to have peaked, the number of people hospitalized is still rising. More than 39,000 patients are being treated in U.K. hospitals, 80% more than during the first peak of the pandemic last April. Britain has reported 93,463 coronavirus-related deaths, more than any other country in Europe and the fifth-highest toll worldwide.

The effort at the cathedral is a community one, involving many. Organists took turns of two hours playing the massive "Father Willis'' — making sure to sanitize in between.

John Challenger, 32, Salisbury’s assistant director of music, said many getting the shots are older people who are isolated and haven’t been able to hear live music for months.

In addition to playing soothing music, Challenger used his time at the organ to entertain and spark memories by playing songs like Mendelssohn’s “Wedding March.”

“And in the more frivolous moments I played ‘I Do Like to Be Beside the Seaside,’ because, you know, we all want to go on holiday and haven’t been able to go where we want,” he said.

Among those listening Wednesday was Sylvia Parkin, 82, who came with her husband, David, 86. They have had to stay home a lot for the past 10 months, which has been no fun.

“It’s a trip out today, isn’t it?″ she said cheerfully. ”It’s a wonderful place to have an injection.″

And while it may be a long way up to the organ loft, people have managed to get their requests in.

Halls played Handel’s “Largo” and Bach’s “Jesu, Joy of Man’s Desiring” for an 80-year-old neighbor who had sent an email asking for his favorites to be played precisely at 10:45 a.m. Saturday, just as the needle was going in.

As Halls finished, he glanced at the screen that shows the organist what’s happening on the floor below and saw his neighbor frantically waving — windshield wiper style — and offering his thanks.

“He emailed me later and he said that was the best part of his entire life other than his wedding day,” Halls said. “I think to come second to that is quite good, actually.”