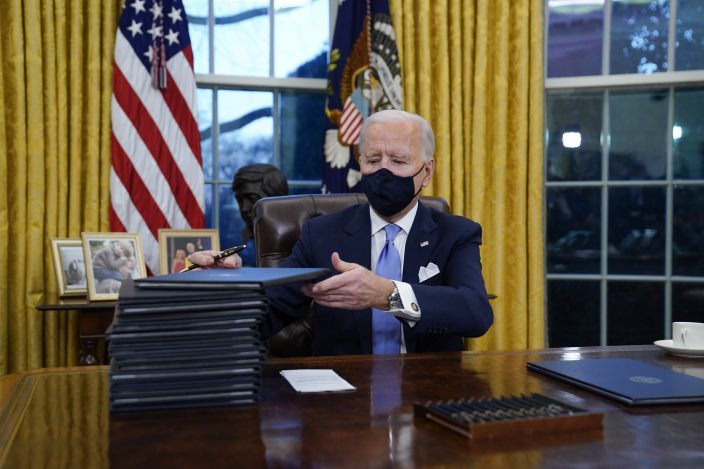 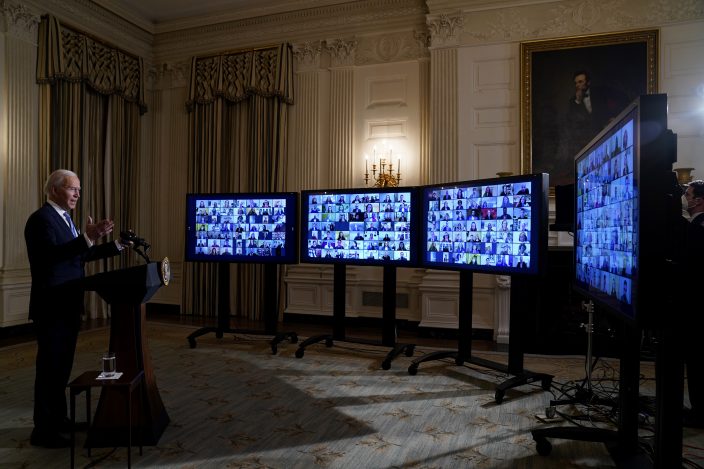 President Joe Biden speaks during a virtual swearing in ceremony of political appointees from the State Dining Room of the White House on Wednesday, Jan. 20, 2021, in Washington. (AP PhotoEvan Vucci) 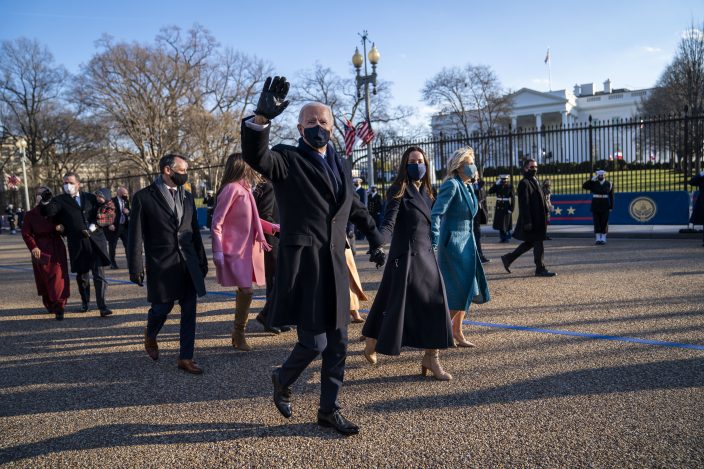 VIRUS OUTBREAK — As the U.S. enters “what may well be the toughest and deadliest period virus,” Biden is taking steps to try to stem the pandemic. He is intent on demonstrating a sense of urgency and competence that he argues was missing under his Republican predecessor. By Ricardo Alonso-Zaldivar. UPCOMING: 990 words, photo by 5 a.m. With VIRUS OUTBREAK-BIDEN-GLANCE.

REPUBLICAN FUTURE — For the first time in more than a decade, Republicans are waking up to a Washington where Democrats control the White House and Congress, adjusting to an era of diminished power, deep uncertainty and internal feuding. The process is especially intense as Republicans confront profound questions about what the party stands for without Donald Trump in charge. By National Political Writer Steve Peoples. SENT: 1,140 words, photos.

VIRUS-OUTBREAK-VACCINE-VAN — More potential COVID-19 vaccines to fight the pandemic still are being tested, and some researchers are driving mobile labs into neighborhoods to recruit diverse volunteers. With scarce supplies of the Pfizer and Moderna shots, proving whether additional vaccines work is critical. So is ensuring they’re tested in communities of color that are hard-hit by the coronavirus yet have questions about vaccination. By Lauran Neergaard and Joseph B. Frederick. SENT: 970 words, photos, video. 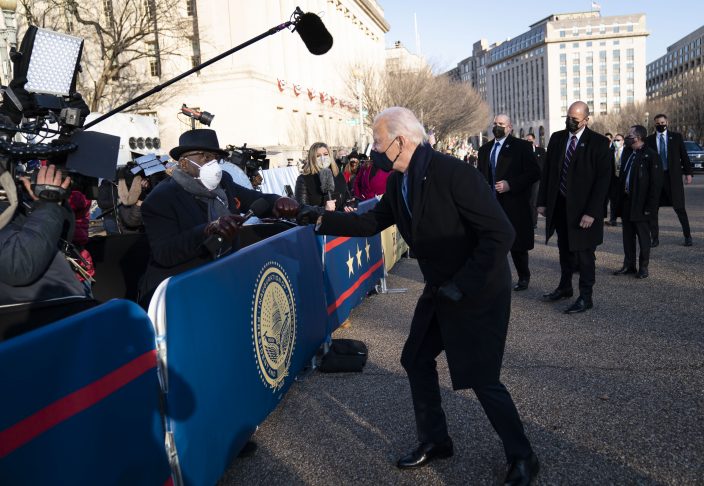 President Joe Biden talks with Washington, NBC anchor Al Roker, as he and and First Lady Jill Biden walk along Pennsylvania Avenue in front of the White House during Inaugural celebrations, Wednesday, Jan. 20, 202, after being sworn in as the 46th vice president of the United States. (Doug MillsThe New York Times via AP, Pool)

INAUGURATION-CHINA-ANALYSIS — As Biden takes office, the new U.S. president faces a determined Chinese leadership that could be further emboldened by America’s troubles at home. By Ken Moritsugu. SENT: 960 words, photos.

Find more coverage of the inauguration on the featured topic page in AP Newsroom. 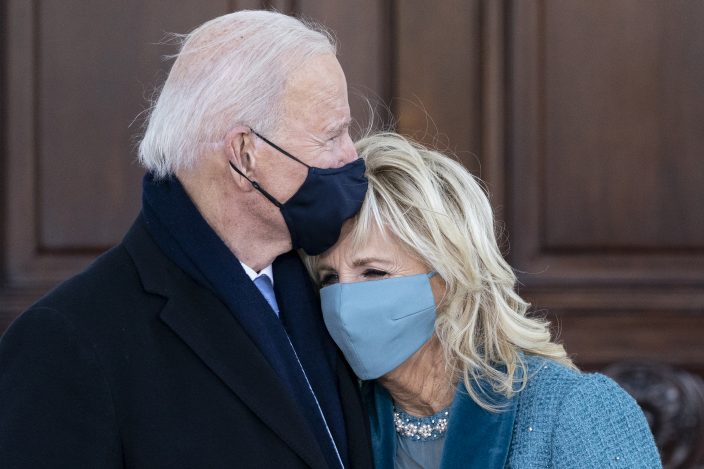 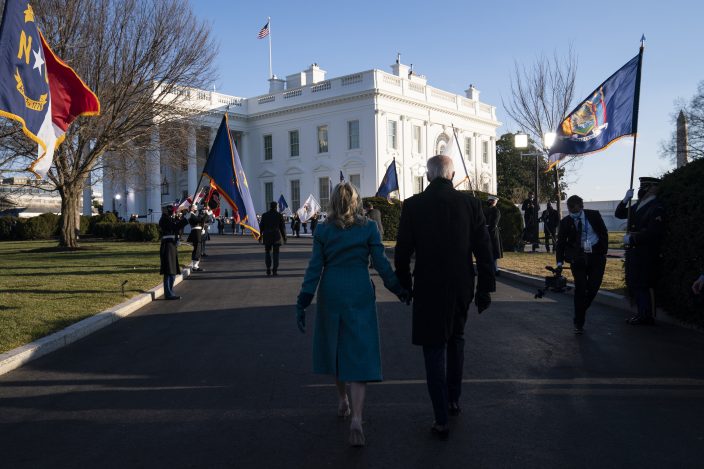 DANCING-ROBOTS-TECH — Behind those dancing robots, scientists had to bust a move. SENT: 680 words, photos, video. 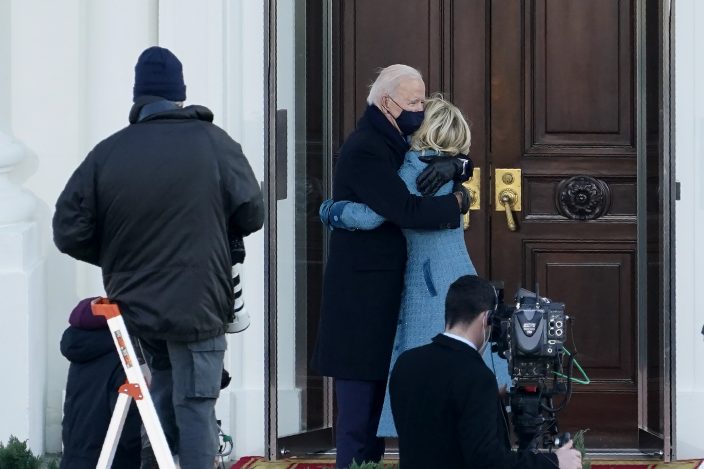 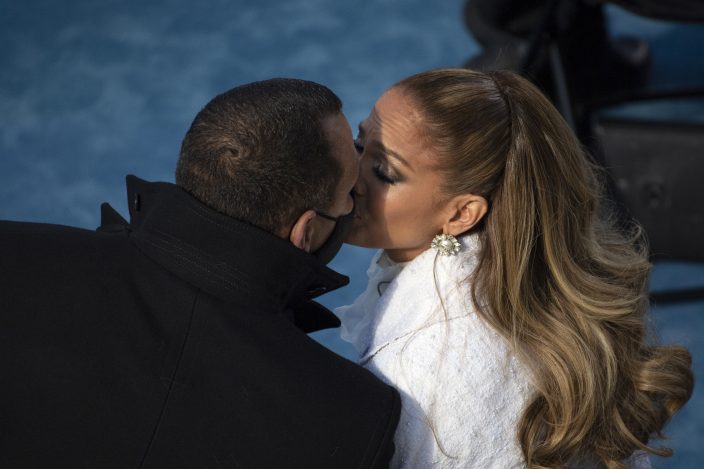 BIDEN-INAUGURATION-ANALYSIS — Biden began his tenure with a call for American unity, but the new president's words felt less like rhetorical flourishes and more like an urgent appeal to stabilize the nation. By Washington Bureau Chief Julie Pace. SENT: 970 words, photos, video. With BIDEN-INAUGURATION-SCENE — Washington couldn’t turn the page quickly enough from Trump to Biden; BIDEN-INAUGURATION-ON THE PLATFORM — Where Biden stood, reminders of a failed insurrection. 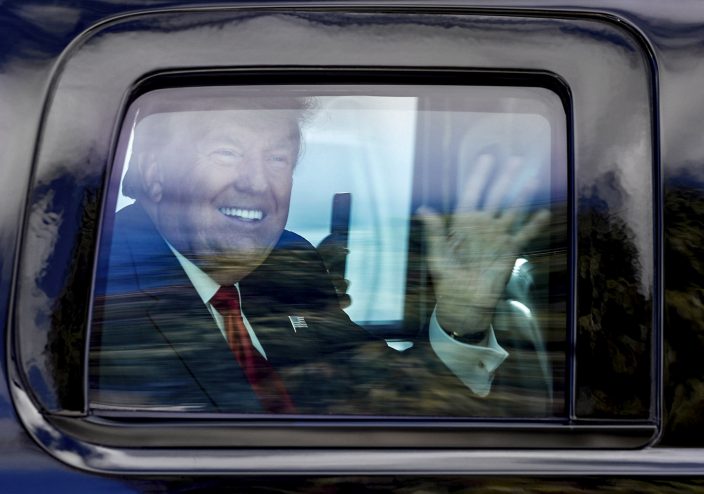 Former President Donald Trump waves to supporters as his motorcade drives through West Palm Beach, Fla., on his way to his Mar-a-Lago club in Palm Beach after arriving from Washington aboard Air Force One on Wednesday, Jan. 20, 2021. (Damon HigginsThe Palm Beach Post via AP)

BIDEN-CONGRESS — Three new senators are sworn into office after Biden’s inauguration, securing the majority for Democrats in the Senate and across a unified government to tackle the new president’s agenda at a time of unprecedented national challenges. By Congressional Correspondent Lisa Mascaro. SENT: 920 words, photos. 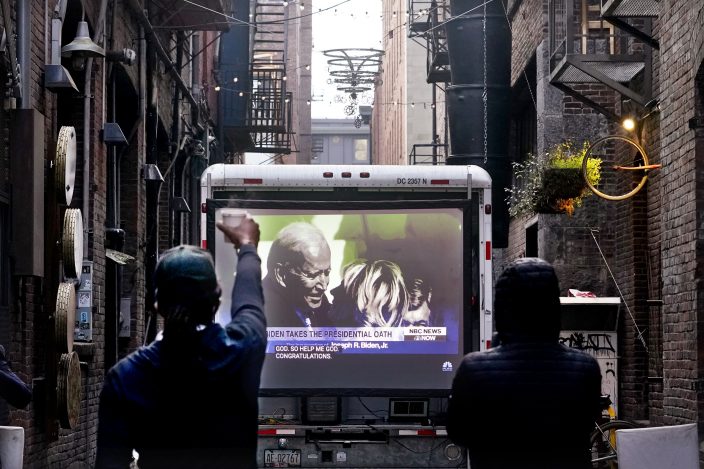 Peace Peloton executive director Doc Wilson, left, raises a cup of coffee in salute while viewing the inauguration of President Joe Biden on a video screen before a bicycle ride by the group Wednesday, Jan. 20, 2021, in Seattle. (AP PhotoElaine Thompson)

VIRUS-OUTBREAK-BRITAIN-CATHEDRAL-VACCINATIONS — An 800-year-old cathedral in southwestern England has been turned into a mass vaccination center as the U.K. races to inoculate 50 million people. SENT: 810 words, photos. 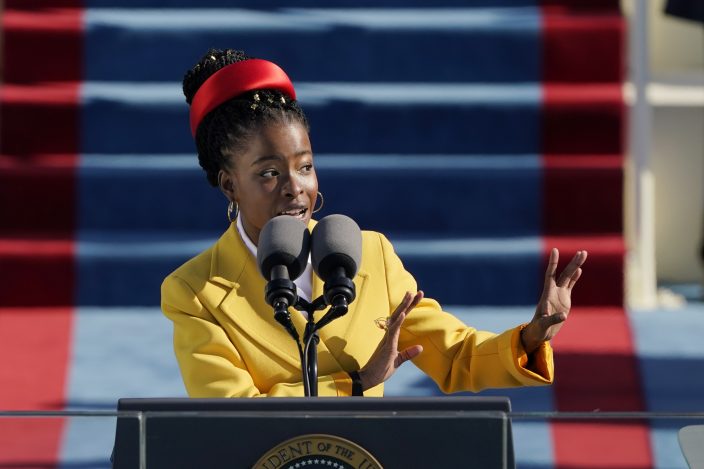 VIRUS-OUTBREAK-VIRAL-QUESTIONS-MIXING-VACCINES — The COVID-19 vaccines available so far require two shots, and health officials say the doses should be the same kind. 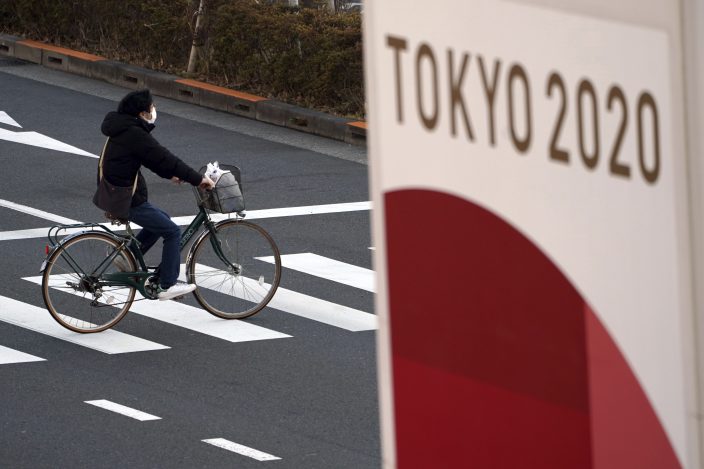 A man wearing a protective mask to help curb the spread of the coronavirus rides a bicycle near a banner of the Tokyo 2020 Olympics in Tokyo Thursday, Jan. 21, 2021. The Japanese capital confirmed more than 1400 new coronavirus cases on Thursday. (AP PhotoEugene Hoshiko)

IRAQ-IRAN-LIFELINE — Piles of plush carpets line the floors of a northern Iraq shopping center hosting traders from neighboring Iran who hope the spangle of their ornate handicrafts might offer a lifeline out of poverty. SENT: 590 words, photo.

BIDEN-INAUGURATION-QANON — Biden’s inauguration has sown a mixture of anger, confusion and disappointment among believers in the baseless QAnon conspiracy theory. SENT: 1,090 words. photos.

NORTHWEST-PROTESTS — A group of protesters carrying anti-Biden and anti-police signs marched in Portland streets and damaged the headquarters of the Democratic Party of Oregon, police say. SENT: 290 words, photos.

EUROPE-ECONOMY — The European Central Bank is looking at a darkening picture for the economy as infections and deaths surge. By Business Writer David McHugh. SENT: 500 words, photo.