Driving to Dublin — it’s, well, a long way from Tipperary. Too long for Dean Gardiner, especially with a new baby and full-time university courses.

The Irish super heavyweight boxer tried to endure the grind of traveling and training for another shot at the Olympics, but he's called it a career.

The four-time Irish champion said the Tokyo Olympics, delayed a year because of the coronavirus pandemic, are no longer his top priority. 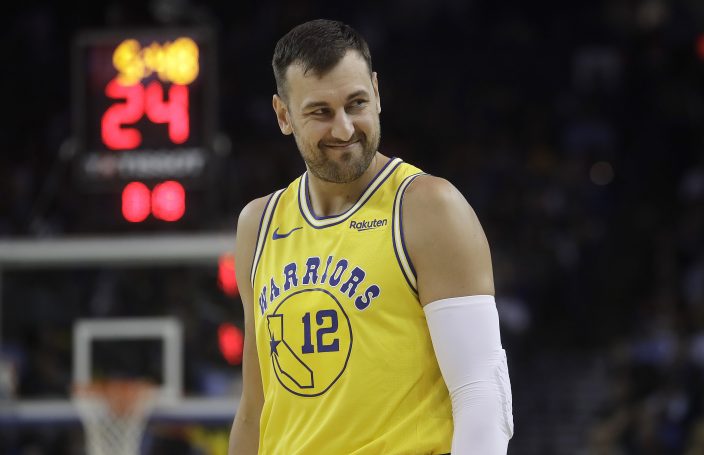 FILE - In this Tuesday, April 2, 2019 file photo, Golden State Warriors center Andrew Bogut looks on during an NBA basketball game against the Denver Nuggets in Oakland, Calif.. Australian basketball player Andrew Bogut had hoped to finish his career in Tokyo last summer, but he announced his retirement in December, saying “I just can't physically and mentally get to 2021." (AP PhotoJeff Chiu, file)

“I just couldn't do it all,” the 32-year-old Gardiner said of his packed schedule, which included driving several times per week from Tipperary to Ireland's high-performance training center in the capital 100 miles away.

“The year was going by, I was getting older, I have the responsibility of being a father, I have a responsibility to give everything to my college," he said. "I have other priorities now that are higher up the list than boxing.”

Australian basketball player Andrew Bogut had hoped to finish his career in Tokyo last year, but he announced his retirement in December, saying “I just can't physically and mentally get to 2021."

Belgian swimmer Pieter Timmers and his wife, Elle De Leeuw, had drawn up what they had called their “watertight” plan. It included Tokyo and moving to a new house with their 3-year-old daughter.

“I was going to stop after the Olympics,” said Timmers, who turned 33 on Thursday.

“It's extremely unlucky because I had an opportunity to go to my third Olympics and do well,” said Timmers, who also competed at the 2012 London Games.

He retired in November after competing in the International Swimming League. Continuing would be unfair to his family, he said.

“It's not practical to keep swimming for one more year,” he said.

About 11,000 athletes are expected to compete in the Olympics — set to start on July 23. The Paralympics add another 4,400 athletes. Japanese Prime Minister Yoshihide Suga has framed the games as “proof of human victory against the coronavirus.”

The International Olympic Committee and local organizers are adamant the games will happen, but there's also speculation around them being canceled.

Along with his new responsibilities, Gardiner was also fed up with the uncertainty. He held out hope that Europe's qualifying tournament — postponed last March — would be held in February. If so, he may have given it a shot. He was scheduled to fight in the round of 16.

“But when they got moved back to April, I was like, ‘I’m not going to be able to do it,'” he said. “I was also thinking they might get moved back (yet) again.”

Gardiner would have qualified for Rio if he beat Italian boxer Guido Vianello in qualifying held in Azerbaijan in 2016, but he came up short.

The 6-foot-5, 230-pound Irishman has also traded blows in the amateur ranks with Joe Joyce, who is now 12-0 as a professional.

Gardiner has turned down opportunities to go pro and said he's now fully focused on life after boxing. He's even hoping to distance himself from his well-known nickname, “Breakfast,” which he picked up in childhood, not from his physique.

“I was in my prime last year, and I'm still just about there,” he said. "But there's only one place as an amateur boxer where I'm going to go, that's downhill a bit because I'm nearly 33.

“I felt a bit of relief when I made the decision.”

Si Woo Kim breaks putter during second round of the Mas ...