The Nashville Predators will use a lottery to sell a couple hundred tickets to season-ticket holders for games on Tuesday and Wednesday against the Chicago Blackhawks.

The Predators announced the lottery Thursday morning. Tickets will be sold in pods of two seats each and lottery winners will get the chance to buy tickets for either game. 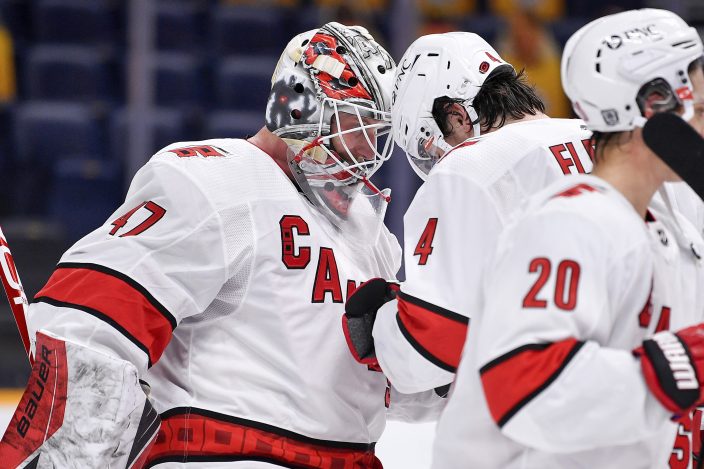 Senior vice president Nat Harden says it’s no secret the Predators’ fans’ energy have helped create an unbeatable environment and that fans were sorely missed through the first three games. Harden says they continue working with the Board of Health and other groups to keep people safe inside Bridgestone Arena hoping to gradually increase attendance.

Only three NHL teams allowed fans in at the start of this season with Florida averaging 3,907 earlier this week and Arizona had an average of 2,329 at its first two home games. Dallas plans on having fans in the building Friday night when the Stars open the season against Nashville after a COVID-19 outbreak delay.

Carolina Hurricanes president and general manager Don Waddell said he is hopeful the team will be able to resume some workouts this weekend and play next week after having three games postponed due to COVID-19 protocols.

The NHL called off Carolina’s game at Nashville on Tuesday in the league’s first in-season postponement, then announced additional postponements for Carolina through “at least” Saturday.

That came after five Hurricanes players had been placed on the league’s COVID-19 protocol list since last week, with four coming after the Nashville postponement. Carolina was scheduled to open a two-game home set Thursday against Florida.

Coach Rod Brind’Amour said the team has “guys sitting in Nashville right now in a hotel room that can’t leave their room. It’s brutal. I feel for these guys.”

Waddell and Brind’Amour said the team followed health and safety protocols, which the league noted Wednesday.

“We done all the protocols, we’ve tried,” Brind’Amour said. “I think we’ve done a great job. Obviously it didn’t matter, it got into our room.

The Latest: Fans to be allowed at New Jersey sports venues

The Latest: Vegas-Blues game postponed due to COVID protocol

The Latest: Sharks to open home schedule hosting in Arizona