House Democrats are pushing for a quick impeachment trial for Donald Trump over the riots at the Capitol, arguing a full reckoning is necessary before the country — and the Congress — can move on.

House Speaker Nancy Pelosi could send the article charging the former president with “incitement of insurrection” to the Senate as soon as Friday, setting up an immediate trial over the weekend or next week. Democrats say lawmakers can move quickly because they were all witnesses to the siege, many of them fleeing for safety as the rioters descended on the Capitol.

“It will be soon, I don’t think it will be long, but we must do it,” Pelosi said Thursday. She said Trump doesn’t deserve a “get out of jail card” in his historic second impeachment just because he has left office and President Joe Biden and others are calling for national unity. 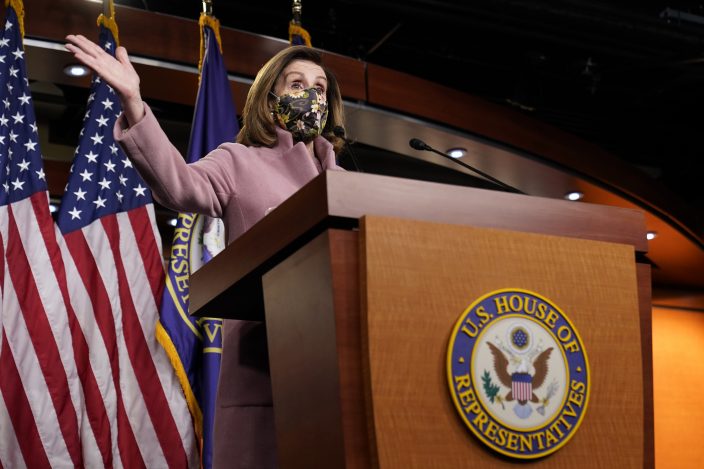 Pelosi said she will talk to her impeachment managers, the nine House prosecutors she selected to argue the case before the Senate jury, “in the next few days” about when the Senate might be ready for a trial.

Trump told thousands of supporters to “fight like hell” against the election results that Congress was certifying on Jan. 6 just before an angry mob invaded the Capitol and interrupted the count. Five people, including a Capitol Police officer, died in the mayhem, and the House impeached the outgoing president a week later with 10 Republicans joining all Democrats in support. 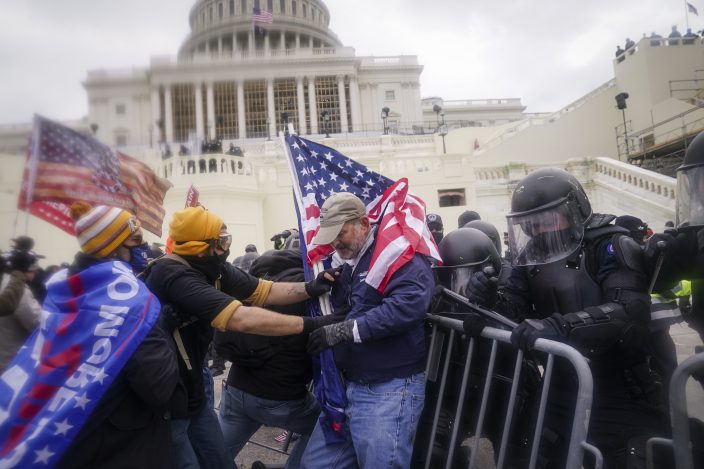 FILE - In this Jan. 6, 2021, file photo rioters try to break through a police barrier at the Capitol in Washington. (AP PhotoJohn Minchillo, File)

Though Pelosi can trigger the trial by transmitting the article to the Senate — a process that in the past involved the impeachment managers walking the charges across the Capitol — the timing of the trial could also depend on discussions between Senate Majority Leader Chuck Schumer and Republican leader Mitch McConnell, who are negotiating how to run the newly 50-50 Senate. Democrats are hoping to conduct the proceedings while also passing legislation that is a priority for Biden, including coronavirus relief, but they would need some cooperation from Senate Republicans to do that.

Schumer told reporters Thursday that he was still negotiating with McConnell on how to conduct the trial, “but make no mistake about it. There will be a trial, there will be a vote, up or down or whether to convict the president.”

Another unknown as the trial nears is whether Trump will hire lawyers to represent him. After leaving office on Wednesday, he no longer has a White House counsel’s office at his disposal as he did during his first impeachment. Members of his past legal team have indicated they do not plan to join the effort this time around.

South Carolina Sen. Lindsey Graham, one of Trump’s loyal GOP allies who has been helping him find representation, said Thursday that “I think he’s going to get a legal team here pretty soon” but did not offer details. Jason Miller, a Trump campaign aide who flew with Trump to Florida on Wednesday morning just before Biden was sworn in, said there will be a “traditional defense operation that’s set up” but also did not elaborate.

Trump was acquitted by the Senate in February after his legal team aggressively fought the House charges that he had encouraged the president of Ukraine to investigate Biden in exchange for military aid. This time around, Pelosi noted, the House is not seeking to convict the president over private conversations but for a very public insurrection that they experienced themselves and that played out on live television.

“This year the whole world bore witness to the president’s incitement,” Pelosi said.

Illinois Sen. Dick Durbin, the No. 2 Senate Democrat, said it was still too early to know how long a trial would take, or if Democrats would want to call witnesses. But he said “you don’t need to tell us what was going on with the mob scene, we were rushing down the staircase to escape.”

McConnell, who said this week that Trump “provoked” his supporters before the riot, has not said how he will vote. He told his GOP colleagues that it will be a vote of conscience.

Democrats would need the support of at least 17 Republicans to convict Trump, a high bar. While a handful of Senate Republicans have indicated they are open to conviction, most have said they believe a trial will be divisive and questioned the legality of trying a president after he has left office.

Graham said that if he were Trump’s lawyer, he would focus on that argument and also the merits of the case, whether it was “incitement” under the law. He agreed with Pelosi that a trial should be quick.

“I guess the public record is your television screen,” Graham said. “So, I don’t see why this would take a long time.”