A federal judge on Thursday lashed out at a Georgia lawyer accused of storming the U.S. Capitol, saying the lawyer had been seduced by a dangerous ideology that “poisoned this man’s mind.”

The comments came during a telephone hearing in U.S. District Court in Georgia, where U.S. Magistrate Judge Charles Weigle rejected William McCall Calhoun Jr.’s request to be allowed to stay at his sister’s house in Macon, Georgia. Instead, the judge ordered him to remain behind bars for now.

Calhoun’s social media accounts referenced his alleged ability to fire sniper headshots, and called for the “slaughter" of political enemies, FBI Special Agent Tim Armentrout testified. Calhoun bragged on social media that he was among the first rioters to break into House Speaker Nancy Pelosi’s office on Jan. 6, and predicted the powerful Democrat “probably would have been torn into little pieces” if rioters had found her there, prosecutors said. 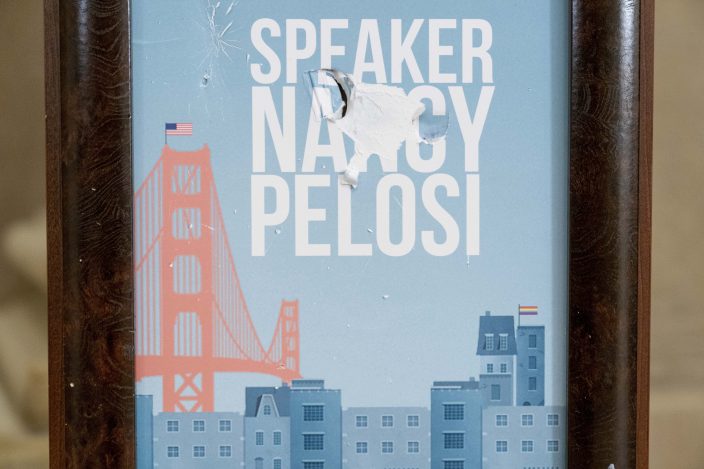 The sign in front of the office of Speaker of the House Nancy Pelosi, D-Calif., is damaged in the early morning hours at the Capitol in Washington, Thursday, Jan. 7, 2021, after protesters stormed the Capitol on Wednesday. (AP PhotoAndrew Harnik)

“I have no comfort in sending a probation officer to your house to meet with you — I would be afraid for their life,” the judge told Calhoun, 57. He said the Capitol invaders “tore the place to shreds” and told Calhoun that “you showed that there was nothing that would hold you back except force.”

Calhoun, who practices law in the south Georgia town of Americus, faces charges including violent entry or disorderly conduct, and entering a restricted building.

Defense lawyer Tim Saviello said his client is a licensed lawyer in good standing with the State Bar of Georgia, and vowed that he would show up for court hearings if allowed to stay with his sister rather than being locked up.

A second Georgia man, 58-year-old Michael Shane Daughtry of Pelham, also appeared before a federal judge last week after being charged with illegally entering a restricted building or grounds. Daughtry told a police officer he was among the first group that forced its way past police barricades to the Capitol doors, but he backed away after being shot with rubber bullets, an FBI agent’s affidavit said.

More than 175 people have been arrested so far on charges related to the violent insurrection led by supporters of President Donald Trump at the Capitol, where a Capitol police officer and four others were killed.

After playing in his first game wi ...