Some COVID-19 vaccination sites in New York City began canceling or postponing shots or stopped making new appointments Thursday amid vaccine shortages around the U.S. that President Joe Biden has vowed to turn around.

Smaller-than-expected deliveries from the federal government have caused frustration and confusion and limited states' ability to attack the outbreak that has killed over 400,000 Americans. Over the past few days, authorities in California, Ohio, West Virginia, Florida and Hawaii warned that their supplies were running out. 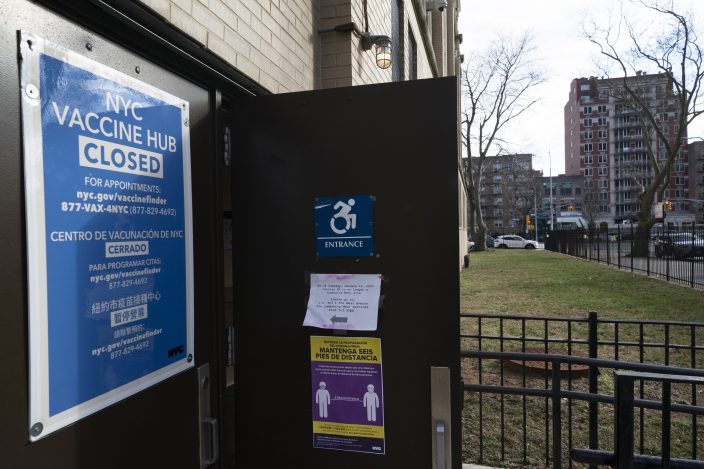 “It’s just tremendously sad that we have so many people who want the vaccine and so much ability to give the vaccine, what’s happening?” he said. “For lack of supply, we’re actually having to cancel appointments.”

Over the past two weeks, states, at the urging of the Trump administration, rapidly expanded their vaccination drives to people 65 and older, which has raised expectations of availability and created greater demand.

The Health and Human Services Department suggested last week that states' expectations for how much vaccine was on the way were off the mark. 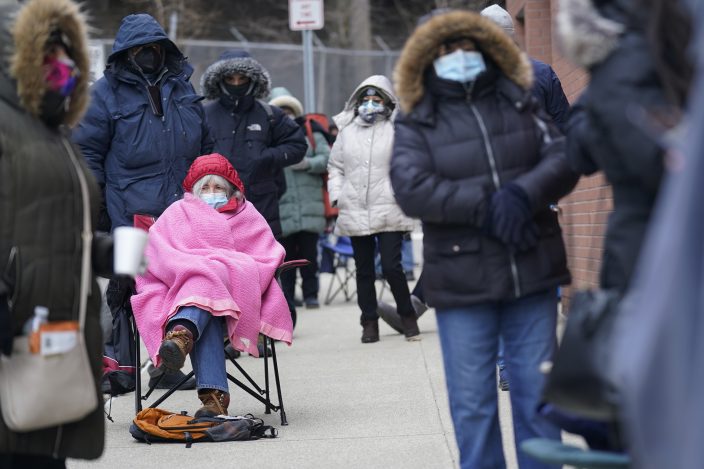 Judy McKim, center left, waits in line with others for the COVID-19 vaccine in Paterson, N.J., Thursday, Jan. 21, 2021. The first people arrived around 2:30 a.m. for the chance to be vaccinated at one of the few sites that does not require an appointment. (AP PhotoSeth Wenig)

But Dr. Marcus Plescia of the Association of State and Territorial Health Officials said opening vaccine eligibility broadly to people 65 and older was done too soon, before supply could catch up.

“We needed steady federal leadership on this early in the launch,” Plescia said. “That did not happen, and now that we are not prioritizing groups, there is going to be some lag for supply to catch up with demand.”

Supply will pick up over the next few weeks, he said. Deliveries go out to the states every week, and the government and drugmakers have given assurances large quantities are in the pipeline. 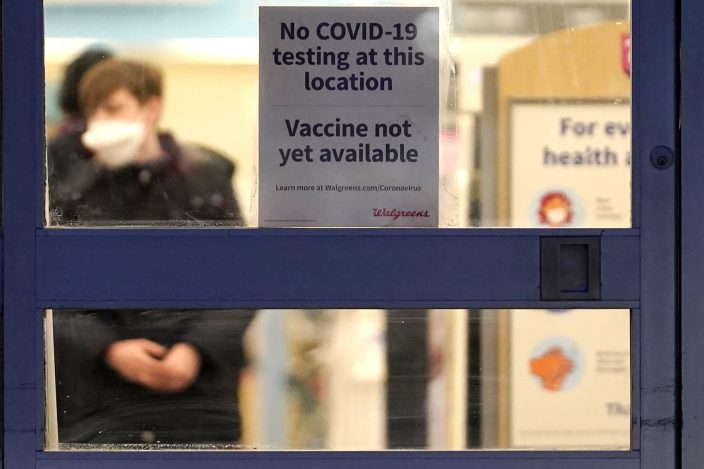 FILE - In this Jan. 16, 2021, file photo, a sign saying that a COVID-19 vaccine is not yet available hangs at Walgreens in Glenview, Ill. Smaller-than-expected vaccine deliveries from the federal government have caused frustration and confusion and limited states' ability to attack the outbreak that has killed over 400,000 Americans.(AP PhotoNam Y. Huh, File)

The rollout has proceeded at a disappointing pace. The U.S. government has delivered nearly 38 million doses of vaccine to the states, and about 17.5 million of those have been administered, according to the Centers for Disease Control and Prevention.

About 2.4 million people have received the necessary two doses, by the CDC's count — well short of the hundreds of millions who will have to be inoculated to vanquish the outbreak.

Dr. George Rutherford, an epidemiologist at the University of California, San Francisco, said the vaccine problem could be solved fairly quickly by ramping up production. He said unpredictability of how much vaccine a state can expect makes it difficult to plan how to inoculate people. 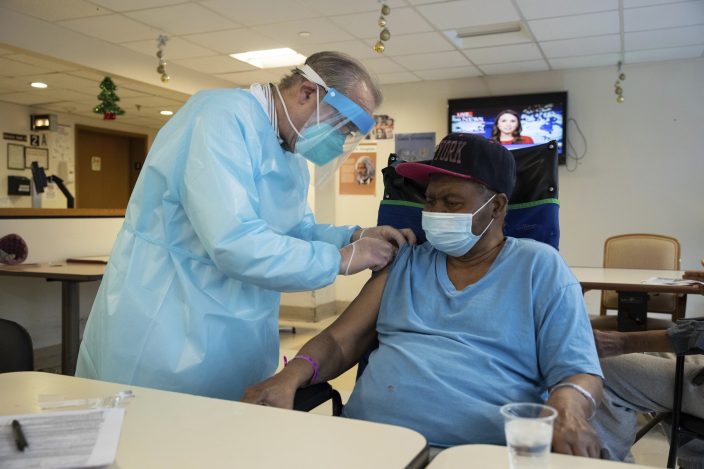 FILE - In this Jan. 15, 2021, file photo, CVS Pharmacist Gerard Diebner administers the COVID-19 vaccine to a nursing home resident at Harlem Center for Nursing and Rehabilitation, a nursing home facility, in Harlem neighborhood of New York. Smaller-than-expected vaccine deliveries from the federal government have caused frustration and confusion and limited states’ ability to attack the outbreak that has killed over 400,000 Americans. (AP PhotoYuki Iwamura, File)

“It's a bit of having to build it as we go,” Rutherford said. “It's a front-end supply issue, and unless we know how much vaccine is flowing down the pipe, it's hard to get these things sized right, staffed, get people there, get them vaccinated and get them gone.”

Biden signed 10 executive orders to combat the coronavirus pandemic on Thursday, including one broadening the use of the Defense Production Act to expand vaccine production. The 1950 Korean War-era law enables the government to direct the manufacture of critical goods.

He also mandated masks for travel, including in airports and on planes, ships, trains, buses and public transportation, and ordered the Federal Emergency Management Agency to set up vaccination centers and the CDC to make vaccines available through pharmacies starting next month. 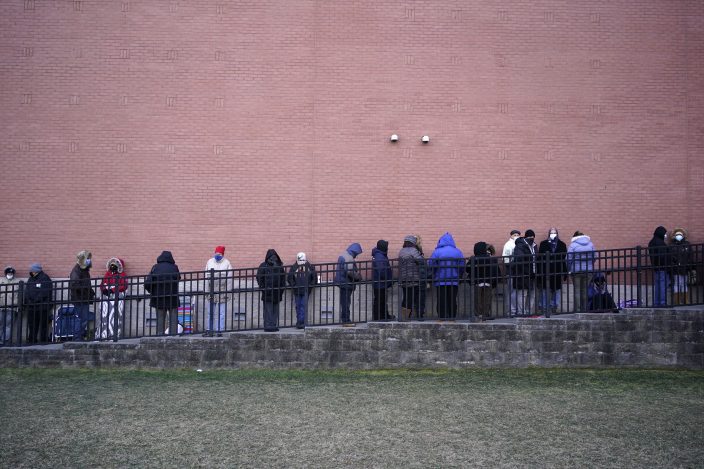 People wait in line for the COVID-19 vaccine in Paterson, N.J., Thursday, Jan. 21, 2021. The first people arrived around 2:30 a.m. for the chance to be vaccinated at one of the few sites that does not require an appointment. (AP PhotoSeth Wenig)

Biden has vowed to dispense 100 million shots in his first 100 days.

“We’ll move heaven and earth to get more people vaccinated for free,” he said.

Dr. Philip Chan of the Rhode Island Department of Health said Thursday that the state is still only getting 14,000 doses weekly, which is enough to vaccinate only 1.5% of the state's population per week. 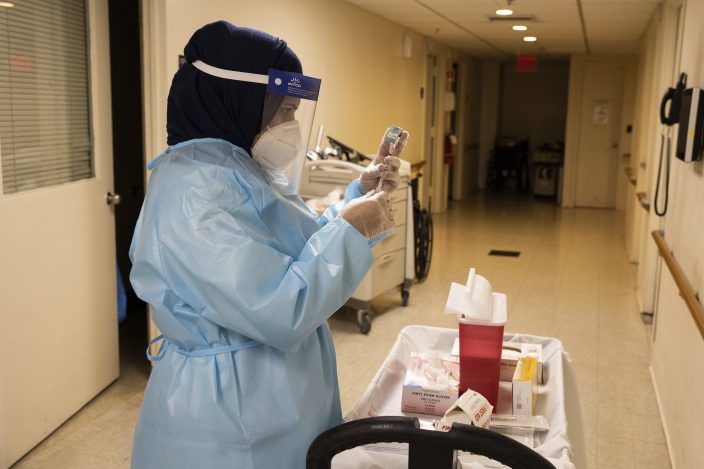 FILE - In this Jan. 15, 2021, file photo, a CVS Pharmacist prepares a COVID-19 vaccine for the nursing home residents at Harlem Center for Nursing and Rehabilitation, a nursing home facility in Harlem neighborhood of New York. (AP PhotoYuki Iwamura, File)

The state is focused on vaccinating health care workers and nursing home residents. It has not yet opened up the line to its 187,000 people 65 and older.

“We just don’t have that amount of vaccine, unfortunately, to support that kind of demand. In other states which have taken this approach, it has resulted in an enormous amount of confusion, frustration, including long lines and crowds, which we’re obviously trying to avoid during this pandemic,” Chan said

In New York, de Blasio and Gov. Andrew Cuomo have been pleading for more doses. Appointments through Sunday for the first dose of the vaccine at 15 community vaccination hubs set up by the city health department were postponed to next week.

Rosa Schneider had jumped at the chance to make a vaccination appointment once she heard that educators like her were eligible in New York. A high school English teacher who lives in New York City but works in New Jersey, she said that a day before she was to be vaccinated on Wednesday at a city-run hospital, she got a call saying the supply had run out and the appointment was canceled.

“I was concerned, and I was upset,” said Schneider, 32, but she is trying daily to book another appointment. She is hopeful availability will improve in the coming weeks.

Álvaro Morata made a scoring retur ...

Expanded vaccine rollout in US spawns a new set of problems