Dwayne Haskins will attempt to kick-start his career with the Pittsburgh Steelers.

The Steelers signed the former Washington quarterback to a futures contract on Thursday, giving the 23-year-old a second chance after he flamed out in the nation's capital in less than two seasons.

Haskins celebrated the signing by tweeting a photoshopped picture of him wearing a No. 3 Steelers jersey along with the comment “3 in the Bible stands for restoration and eternal life. Let's work.” 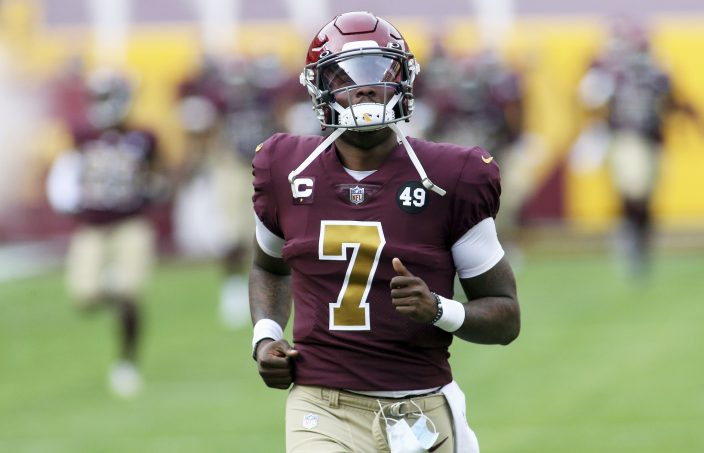 FILE - In this Nov. 22, 2020, file photo, Washington Football Team quarterback Dwayne Haskins runs onto the field as the team is introduced before an NFL football game against the Cincinnati Bengals in Landover, Md. The Pittsburgh Steelers signed the former Washington quarterback to a futures contract on Thursday, Jan. 21, 2021, giving the 23-year-old a second chance after the flamed out in the nation's capital in less than two seasons. (AP PhotoDaniel Kucin Jr., File)

Work is something Haskins struggled with after Washington selected him with the 15th overall pick in the 2019 draft. What was supposed to be a homecoming for someone who grew up in the city's suburbs quickly turned into a forgettable chapter for both Haskins and a franchise in a seeming relentless search for stability under center.

Haskins put together an uneven rookie season in 2019 after taking over the starting job around the midway point. He moved to the top of the depth chart in 2020 under new head coach Ron Rivera, but kept it only four games before being benched in favor of Kyle Allen. Injuries to both Allen and Alex Smith thrust Haskins back into the lineup, but he played poorly in his final three appearances and was benched in the middle of a loss to Carolina on Dec. 27 after turning it over three times.

His problems, however, were not limited to what transpired on the field. He was fined $40,000 and lost his captaincy for breaking COVID-19 rules by partying with several people without a mask following a loss to Seattle on Dec. 20. Just over a week later, he found himself looking for work after Washington released him in favor of journeyman Taylor Heinicke.

Haskins met with Carolina earlier this month then visited the Steelers on Thursday and left the building with a contract. What exactly it means over both the short term and the long term is uncertain.

Pittsburgh went 12-4 this season but wilted following an 11-0 start, dropping five of its final six games, a slide that started with a loss to Washington on Dec. 7 in which Haskins did not play. The swoon ended with a 48-37 rout at home by Cleveland in the first round of the playoffs, a slide that cost offensive coordinator Randy Fichtner and offensive line coach Shaun Sarrett their jobs.

The biggest question heading into 2021 is whether two-time Super Bowl-winning quarterback Ben Roethlisberger returns for an 18th season. Coach Mike Tomlin said last week there's a chance Roethlisberger — who has a contract that carries a salary cap hit of more than $41 million next year — could return. If he does, it means Haskins will likely end up starting as the third-stringer behind Roethlisberger and backup Mason Rudolph.

The Steelers have occasionally taken flyers on players before. They re-signed veteran wide receiver Plaxico Burress near the end of his career in 2012 and brought in quarterback Michael Vick as a backup to Roethlisberger in 2015.

Haskins is at a different point in his career than either of those players, and will join a quarterback room in the midst of a change. Quarterbacks coach Matt Canada is likely to be promoted to replace Fichtner after just one season in Pittsburgh. Backup Josh Dobbs is a free agent and Devlin “Duck” Hodges — a fan favorite after he went from rookie free agent signee to improbable starter in 2019 — saw his contract expire earlier this week.

Still, Haskins moves from a franchise where instability is a constant to one that's among the most stable in all of professional sports. He will be given every opportunity to try and rediscover some of the form that he displayed during his final year at Ohio State in 2018, when he threw for 4,831 yards and 50 touchdowns against just eight interceptions.

The going was far tougher in Washington. Haskins went 3-10 as a starter across two seasons, completed just 60% of his passes and had 12 touchdowns against 14 interceptions.

That, however, came with the pressure of trying to be a franchise quarterback. The stakes are far lower with the Steelers, where Haskins will simply try to prove he belongs in the league and that his maturity problems are behind him.