A man and a woman found shot to death just off a South Carolina highway have been identified by DNA after more than 44 years, a sheriff said Thursday.

James Paul Freund was 30 and Pamela Mae Buckley was 25 when a trucker found their bodies in August 1976 on a narrow paved road just off Interstate 95 near Lynchburg, Sumter County Sheriff Anthony Dennis said.

Both hadn't been seen for about eight months before they died, and investigators are still trying to figure out their relationship, Dennis said. 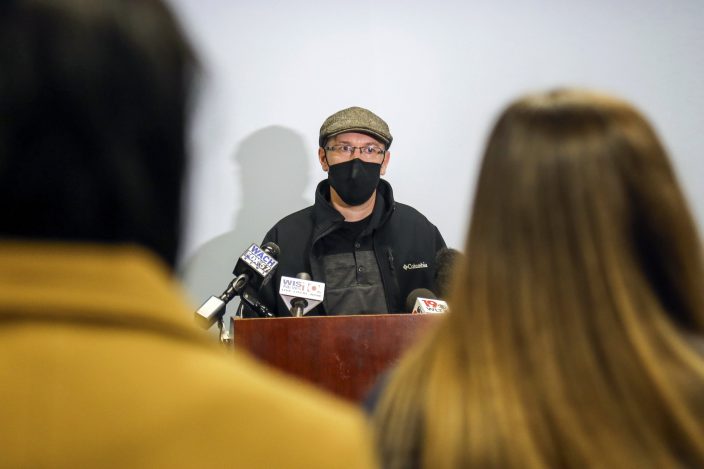 Private investigator Matthew McDaniel talks about his role helping to identify two people found shot to death near Interstate 95 more than 44 years ago at a news conference on Thursday, Jan. 21, 2021, in Sumter, S.C. DNA testing helped identify the victims, whose killer has not been found. (Kayla GreenThe Item via AP)

Freund and Buckley were both shot several times with the same gun and the fatal wound was to the back of their heads, Sumter County Coroner Robbie Baker said.

Whoever shot them has not been found and authorities hope naming the victims and releasing their photos might jog a memory or reach a troubled soul.

“I hope there is somebody out there in the United States that comes with a guilty conscience or has some kind of memory of these victims," Baker said at a news conference.

Freund was from Lancaster, Pennsylvania, and Buckley was from Colorado Springs, Colorado, Dennis said. Their families have been notified and asked for privacy.

Buckley had been reported missing in 1975. A missing person report was never filed for Freund, investigators said.

The killings shook up the community. The sheriff at the time, Ira Parnell, secured burial plots at his church for the victims after their families could not be found, Dennis said.

Former Coroner Verna Moore had the bodies exhumed in 2007 to see if they could be identified through DNA. It took 12 years for DNA databases to build up enough for the match, authorities said.

The sheriff said his investigators have always had a person of interest or two in the killings and they plan to reopen the case and press hard for an arrest.

“The investigation into the homicides remains open and the Sumter County Sheriff's Office will continue to follow up on all credible leads," Dennis said.

Scientists get creative to carry on research during pan ...