A look at what’s happening in European soccer on Friday:

Sixth-division club Chorley will try to pull off another FA Cup upset when it hosts Premier League team Wolverhampton Wanderers. The club from northern England has already eliminated professional teams Wigan, Peterborough and Derby in previous rounds. Chorley manager Jamie Vermiglio is a headteacher in his day job. The club has already earned about 350,000 pounds ($475,000) in prize money and from television appearances, helping to offset losses caused by coronavirus pandemic. Chorley enjoyed one of its biggest moments against Wolves in 1986 — also in the fourth round of the FA Cup. Wolves were then in decline after three straight relegations had plunged them into the fourth division, but this time Chorley faces a team that reached the last 16 of the Europa League last season. 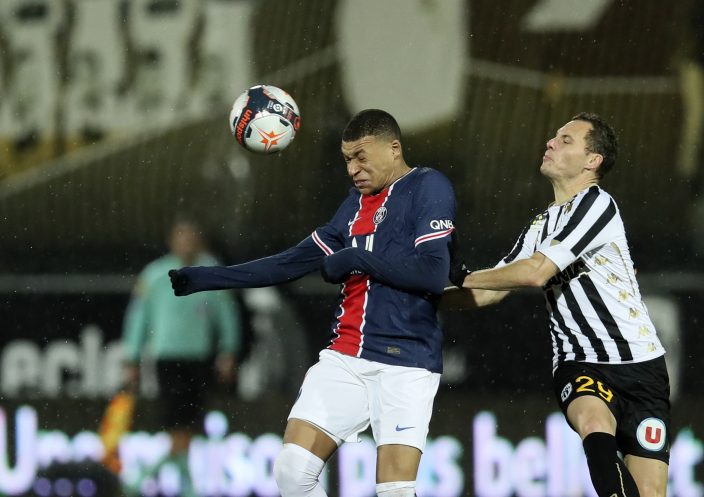 Paris Saint-Germain striker Kylian Mbappe looks to end a run of four games without a goal when the French league leaders host Montpellier at Parc des Princes. The France forward has been below his best in recent weeks and has been unusually wasteful with his finishing. PSG's defense could face a threat from Montpellier striker Andy Delort, who missed the match against PSG last month after contracting the coronavirus for the second time. Delort has nine league goals this season, three behind Mbappe. A win would move PSG three points ahead of second-place Lille. PSG will again be led by assistant coach Jesus Perez while coach Mauricio Pochettino continues his COVID-19 recovery.

Borussia Dortmund coach Edin Terzic questioned his team's will to win after a 2-1 loss to Bayer Leverkusen on Tuesday left them drifting away from the top of the Bundesliga standings, saying their “heads went down” after Leverkusen scored. He wants a turnaround against Borussia Mönchengladbach, but that won’t be easy with Gladbach on a five-game unbeaten run in all competitions, including a win over Bayern Munich on Jan. 8.

Valladolid visits Levante looking to end a two-game winless streak and move further away from the relegation zone. The team owned by former Brazil striker Ronaldo is in 16th place, two points from safety. Levante is in 12th place, three points ahead of Valladolid with a game in hand.

Torino coach Davide Nicola will take charge of his first match since replacing the fired Marco Giampaolo when his team visits promoted Benevento. Relegation-threatened Torino is 18th in the league standings, a point from safety, but Nicola is known as a coach who can rescue teams from desperate situations. Benevento is sitting in relative comfort in the middle of the standings in only its second season in Serie A, but has lost three of its last four matches.