An impermissible sixth substitution prompted the Italian league judge to inflict Roma with a 3-0 loss to Spezia in the Italian Cup on Friday.

Nine-man Roma had already lost Tuesday’s round of 16 match 4-2.

In extra time, Roma sent on Daniel Fuzato for Bryan Cristante and Ibañez for Pedro even though it had already made four changes. 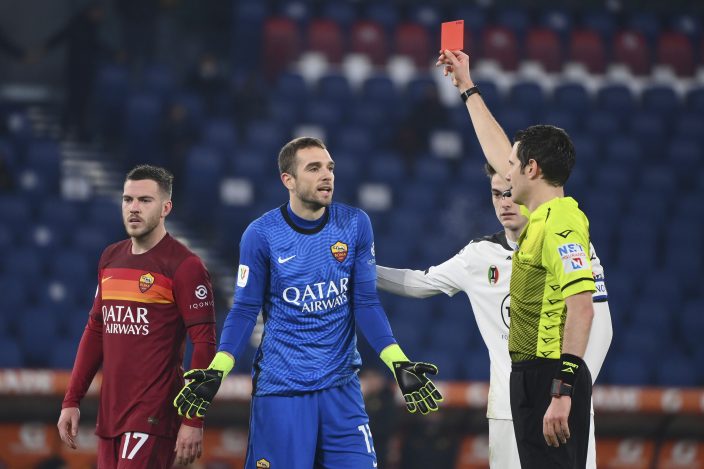 Referee Davide Ghersini, right, shows the red card against Roma's goalkeeper Pau Lopez, center, during the Italian Cup, round of 16 soccer match between Roma and Spezia at the Olympic stadium in Rome, Tuesday, Jan. 19, 2021. (Alfredo FalconeLaPresse via AP)

Five substitutions are permitted under new rules introduced amid the coronavirus pandemic. The changes can made during a maximum of three interruptions during the first 90 minutes and during one more stoppage in extra time.

The substitutions occurred during a chaotic finish after Roma defender Gianluca Mancini and goalkeeper Pau López were sent off within 30 seconds of each other in extra time. Former Roma winger Daniele Verde and Riccardo Saponara then scored for Spezia.

Spezia faces Napoli in the quarterfinals.

It's been a miserable spell for Roma, which was beaten by rival Lazio 3-0 in the capital derby last week in Serie A.

Prince Philip to a London hospital for infection treatm ...